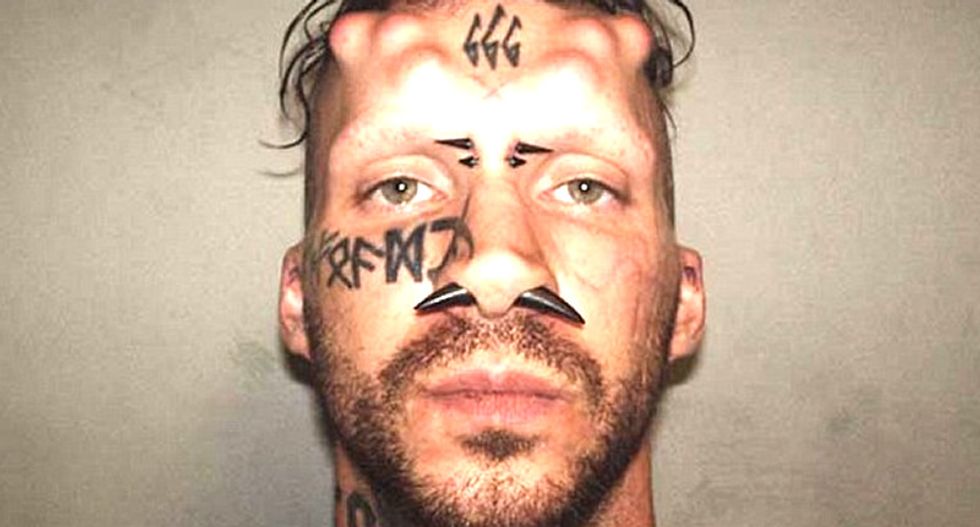 The lawyer for a Massachusetts man who has a "666" tattoo and horns implanted on his forehead believes that his appearance will make it impossible for him to find an impartial jury or receive a fair trial, The Republican reports.

James G. Reardon, Jr. is worried that the appearance of his client, Caius Veiovis, will distract jurors from the facts of the case, and petitioned Hampden Superior Court Judge C. Jeffrey Kinder to allow him to show potential jurors a photograph of Veiovis before jury selection.

Veiovis is accused of assisting David Chalue and Adam Lee Hall in the kidnapping, torturing, murdering, and dismembering of David Glasser, Edward Frampton, and Robert Chadwell in August of 2011. Glasser had been set to testify against Hall, a member of the Hell's Angels motorcycle gang, when he, Frampton, and Chadwell went missing on August 28.

Reardon also petitioned the judge to have photographs taken of Veiovis's apartment excluded from the trial, as they include weapons like machetes, hatchets, and baseball bats with nails protruding from them. The weapons used in the murder and dismembering of the three men have never been identified.

Hall and Chalue have already been convicted in separate trials for their roles in the crimes. Reardon attempted to have the venue for Veiovis's trial changed, citing coverage of the previous trials, but Judge Kinder denied the motion.

Barring a plea arrangement, Veiovis's trial will begin on September 3, 2014.

Watch a report on Caius Veiovis and his "unique appearance" via WWLP-22 News below.