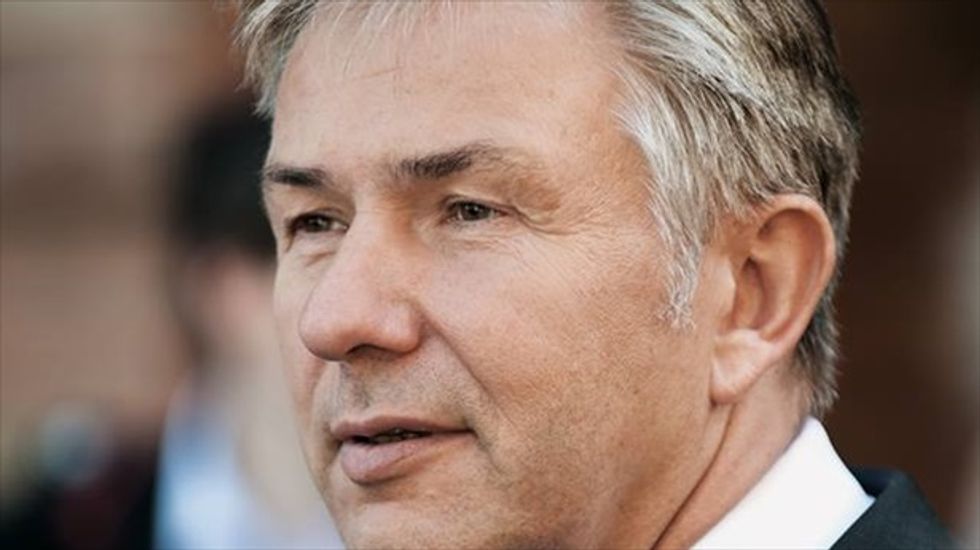 Berlin's embattled mayor Klaus Wowereit, who famously dubbed his city "poor but sexy" and presided over its rise as an arts and party capital, said Tuesday he would step down in December.

Wowereit, who has led Berlin since 2001, had once been seen as a potential Social Democratic challenger to Chancellor Angela Merkel.

But his star rapidly tarnished over a fiasco surrounding a planned international airport, the biggest project of his 13 years in office.

"There was a lot of speculation recently about how long the mayor would stay in office. Two years before the term is up, this was not helpful and did a lot of damage," Wowereit told reporters.

He fought back tears as he said he would leave office on December 11, just weeks after the city celebrates the 25th anniversary of the fall of the Berlin Wall.

It was not immediately clear who would replace him, with several Social Democrats lining up to take the job, or whether his decision would prompt new elections, which are currently scheduled in late 2016.

The airport on the German capital's southeastern outskirts was to open in June 2012 but it has been marred by repeated delays and massive cost overruns and a new opening date has still not been announced.

Wowereit is chairman of the supervisory board of the airport, whose management has faced allegations of corruption and incompetence.

He called the airport debacle a "bitter defeat" and said with a smirk that he would also resign from "that highly attractive post" on the board.

But he said he was proud the city had, after surviving the Nazi and communist dictatorships, become "the place to be" for record numbers of tourists with its world-class cultural institutions and legendary nightlife.

One of Germany's first prominent politicians to come out of the closet, the affable Wowereit told party colleagues before his election as mayor in June 2001: "I'm gay, and that's just fine," coining a catch-phrase.

Christian Lindner, head of the opposition Free Democrats, tweeted Tuesday: "Wowereit is stepping down, and that's just fine. The mayor's leaving but the chaos and debt remain."

Wowereit, 60, who grew up in a leafy district of West Berlin, long embodied the spirit of his all-night party metropolis.

He danced the night away at galas with famous friends, once posing for a photo appearing to drink champagne from the high-heeled red pump of a cabaret star. Wowereit later denied there was any bubbly in the shoe.

During those heady early years of his tenure, he pronounced his heavily-indebted hometown, which was still grappling with the corrosive legacy of its Cold War division, "poor but sexy".

The Berlin economy has recently gained in strength, with some 150,000 jobs created since 2005 and hundreds of new start-up firms setting up shop.

But the famously affordable rents in the city of 3.4 million people have risen apace, particularly in the historic city centre.

Wowereit won re-election twice but his popularity sank rapidly over the airport scandal.

"His departure is a blessing for the city," it wrote, while lamenting that the political landscape would be a little duller without him.

"His motto ('poor but sexy') chimed with the zeitgeist and drew millions of visitors from around the world to the Spree" river running through the city, it said.

Political scientist Gero Neugebauer agreed that Wowereit's legacy would be more positive than his current image.

"The fact that Berlin is so trendy today is also his accomplishment."

Merkel's Christian Democrats are currently leading the polls in Berlin, which is also one of Germany's 16 federal states.

Three eastern states will hold elections in the next three weeks, with Merkel enjoying record popularity.