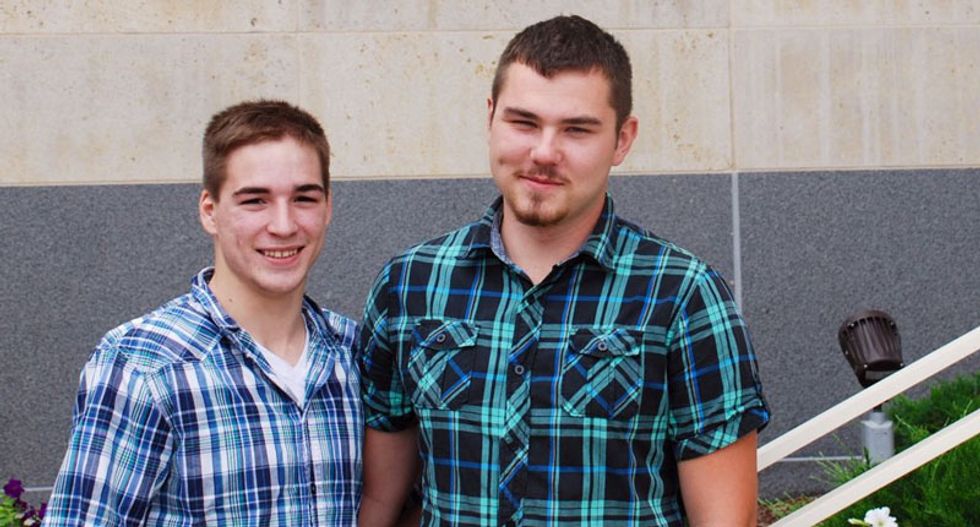 The owners of a hunting lodge in Little Falls, Minnesota have agreed to pay for a couple's wedding and reception after refusing them the use of their facilities after finding out it would be a same-sex ceremony, according to the Star-Tribune.

Cole Frey, 20, had initially secured a date for his wedding at LeBlanc's Rice Creek Lodge only to have the lodge's management reject him when he went to sign the paperwork and provide a security deposit.

"That’s when they found out it would be between two males," Frey explained. "They told us they don’t condone same-sex marriage, and they wouldn’t be marrying us on their property."

Frey is engaged to Adam Block, 18, whom he met last October.

The couple took their complaint to the Minnesota Department of Human Rights who investigated; having a staffer contact the lodge seeking to rent it for a same-sex wedding. The investigator was also refused the use of the premises.

Discrimination based on sexual orientation is illegal in Minnesota and, when the state Legislature legalized gay marriage in 2013, it only exempted religious entities from the law. Businesses such as the lodge are not exempt from nondiscrimination laws based upon religious beliefs regarding same-sex marriage.

Following negotiations with the Department of Human Rights, the owners of LeBlanc's agreed to pay for the couple's wedding at a different location, as well as for their reception and travel costs and lodging for their wedding guests, estimated to be  about $8,500. The date originally requested by Frey and Block at LeBlanc's was no longer available.

Frey was fine with moving the wedding to a different location.

The attorney for the lodge's owners, Paul Rogosheske, said that his clients misunderstood the law.

“They made a mistake and we did everything in our power to correct it,” Rogosheske explained. “This couple is going to have a great wedding and I can assure you LeBlanc’s is going to be open to everybody.”