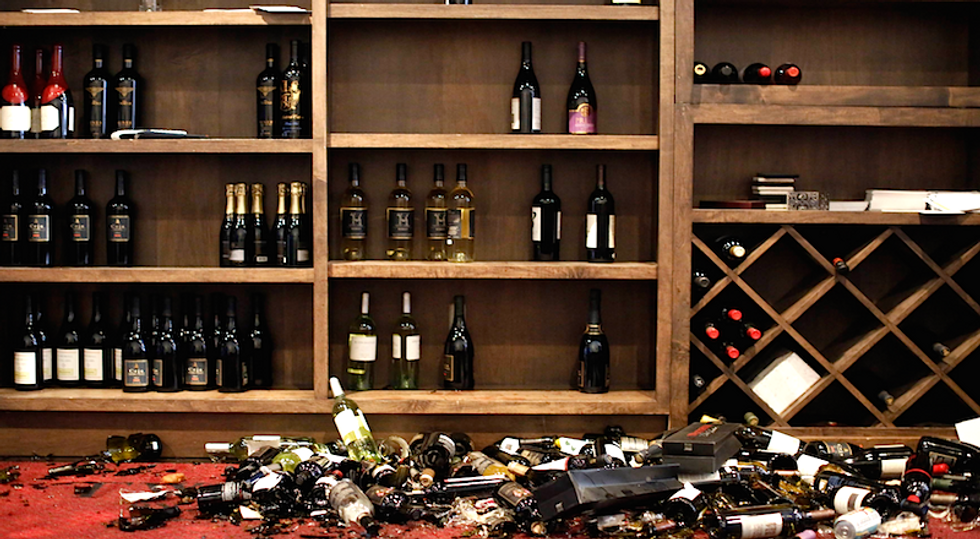 Prized collections and wooden casks crashed to cellar floors when a 6.0 magnitude earthquake struck Napa Valley on Sunday, but damage to the famous wine region at the start of harvest time might be limited to a handful of wineries and warehouses.

Wineries closest to the city of Napa and the earthquake's epicenter reported the most serious losses after the pre-dawn jolt, but the extent of damage was still unclear.

At Saintsbury, around a mile (1.6 km) from the epicenter, co-founder Richard Ward said "we saw a lot of action."

The wine library with samples of Saintsbury vintages since 1981 was hit hard and about 400 bottles were destroyed, while empty barrels came crashing down, creating a big mess.

Harvest at Saintsbury was due to start Monday and Ward said, "We'll probably put that off a couple of days."

The quake that struck at 3:20 a.m. (1020 GMT) was centered 6 miles (10 km) south of Napa and injured dozens of people, damaged historic buildings, set some homes on fire and caused extensive power outages around the picturesque town of Napa.

It was one of the biggest earthquakes to hit the wine region since it emerged as a formidable competitor to French wines in the 1970s, marked by two Napa Valley wines winning the historic 1976 Paris Tasting.

The valley is home today to more than 500 wineries, many of them famous producers of Cabernet Sauvignon, Pinot Noir, Chardonnay and Sauvignon Blanc.

At Silver Oak Winery in Oakville, north of Napa, they lost several hundred bottles of wine, most of them used internally as control bottles for tastings and blends.

"Those bottles were not for sale publicly, but they held really important information to us," said Silver Oak spokesman Ian Leggat.

In downtown Napa, a historic city which had in recent years undergone a big urban renewal to cater to the wine industry and tourism, the quake hit tasting rooms and restaurants which would have been busy on Sunday.

Marguerite Capp, owner of the small winery Capp Heritage Vineyards, was cleaning up her downtown Napa tasting room and said the quake struck at a bad time.

"We are getting ready for the harvest in two weeks. This is going to hurt a tiny bit, and then we are going to get on with it. Mother Nature moves on whether or not we are ready for her,” Capp said.

These weeks are the busiest time for both the wine and tourism industries that sustain the bucolic valley located 45 miles (70 km) north of San Francisco.

Domaine Carneros, a maker of sparkling wine founded by the French group Taittinger, was open for business and dozens of visitors milled around the estate chateau even though the property is close to the epicenter.

"Our assistant winemaker says everything looks fine," in the cellar, said Jake Shebitz, assistant manager, who also didn't foresee any problems with the harvest.

But there was concern about losses to warehouses and other wine-related businesses that had sprung up between Napa and American Canyon in recent years to take advantage of nearby highways.

Marsha Herbert, owner of Custom Wine Services in American Canyon, said she lost a couple hundred cases of wine, including some high-end bottles, out of thousands stored in the warehouse.

"To me, it looked awful, because there was wine everywhere," said Herbert. "But when people stopped in to check on their inventory, they didn’t think it was that bad."

Herbert estimated it would take until Wednesday for clean-up to be completed and inventory totaled.