National Guard to withdraw from Ferguson, Missouri as tensions ease over police shooting 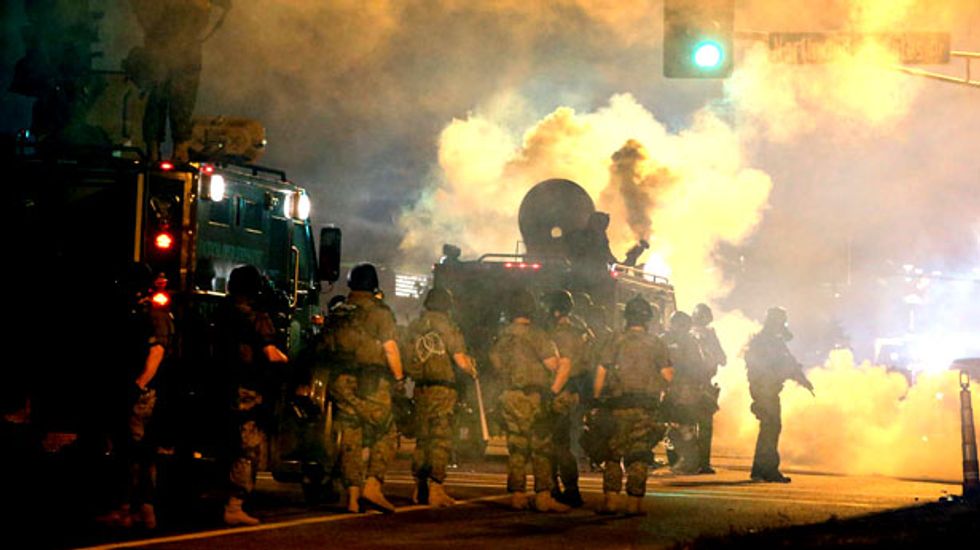 By Carey Gillam and Scott Malone

FERGUSON Mo. (Reuters) - The governor of Missouri ordered the withdrawal on Thursday of National Guard troops from riot-torn Ferguson, where tensions have eased after sometimes violent protests were staged nightly since police killed an unarmed black teenager.

Peaceful demonstrations overnight were the calmest street gatherings in the small St. Louis suburb since riots erupted over the Aug. 9 shooting of 18-year-old Michael Brown by a white police officer.

The controversial shooting by Officer Darren Wilson prompted angry demonstrations along with looting and random gunfire from largely black crowds. Police have used tear gas and heavy armored vehicles to clear the streets and the Missouri National Guard was called in to help.

But the crowds have thinned, and the mood is decidedly less tense. Police said six people were arrested overnight - far fewer than the scores detained on earlier nights of racial unrest.

Governor Jay Nixon ordered the National Guard to begin withdrawing from Ferguson, saying in a statement: "We continue to see improvement."

"Things are de-escalating," said Roy Harris outside Original Reds B-B-Q, located on West Florissant Avenue where many of the protests have taken place.

The restaurant has boarded up its windows but written in large letters in red paint on the plywood planks is the promise: "We will be back!!!" and workers were selling sandwiches in the parking lot next to an outdoor meat smoker.

"We are seeing the judicial process beginning," said Harris, who works as a youth counselor in St. Louis. "Voices are actually being heard."

A grand jury met on Wednesday to begin hearing evidence in the case. That process could take into October before the panel releases its findings, said St. Louis County Prosecuting Attorney Bob McCulloch.

McCulloch, who is responsible for deciding whether to pursue criminal charges against the police officer, has held the top county prosecutor's job for 23 years and has promised an impartial investigation.

Many Ferguson residents, angry that the police officer in question is not in custody and has gone into hiding, fear that if there is no indictment, more street violence is inevitable.

Frustrated by the pace of the process, protesters outside McCulloch's office in nearby Clayton called for his removal from the case. They want the appointment of a special prosecutor, an expedited grand jury proceeding and the immediate arrest of Wilson, who has been placed on leave.

"I am here to deliver a message to Bob McCulloch that the people do not have any confidence in him," Nasheed said. "The people's opinion is that he totally has no ability to do the right thing."

"Civil disobedience is coming down the line, in a strong way, until our demands are met," Baruti said.

Outside a fast-food restaurant on West Florissant Avenue in Ferguson, a small contingent of angry young black men held a homemade wanted poster for Wilson, just blocks from the street where Brown was killed.

They warned there would be no lasting peace until the officer was brought to justice.

"For us he is a wanted man. It is time for calm and peace but only if they bring him to justice," said 23-year-old Dontey Carter, shirtless with a scarf wrapped around his head.

Overnight into early Thursday, a few gunshots rang out and at least one officer was hit by a bottle, but Missouri State Highway Patrol Captain Ron Johnson said: "The trend is good."

"Crowds were smaller, they were calm and orderly," said Johnson, a black officer appointed to oversee security.

Outside the Ferguson Police Department, Nick Smith stood with a small group of protesters braving the hot sun and held a sign reading: "I am black. I am a man. Respect me."

"I think things are calming down," the retired railroad worker said. But he cautioned that the community could not return to such divisiveness and hostility between residents of the majority black town and the overwhelmingly white police force.

"I am quite sure it is hard to be a policeman in this day and age, but you can't treat us like animals," he said. "It is time for a change."

U.S. Attorney General Eric Holder met with Brown's parents on Wednesday and promised a thorough investigation into the case that has fueled debate over the justice system's treatment of African Americans.

The Justice Department has launched an investigation to whether federal prosecutors can bring criminal charges against Wilson.