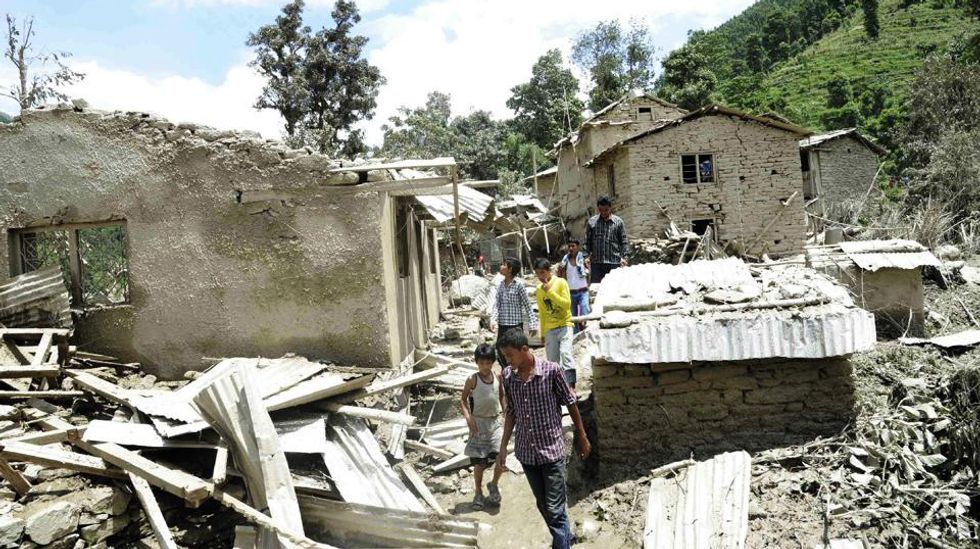 Rescuers on Sunday ruled out finding any more survivors of a landslide in northeast Nepal feared to have buried at least 100 people under tonnes of mud and rocks.

Nine bodies have been pulled from the rubble after the landslide caused by heavy monsoon rains smashed into hamlets along a river in Sindhupalchok district before dawn on Saturday, an official said.

"It has been over 24 hours that people would have been buried in mud. We have no hope of finding anyone alive," government disaster management head Yadav Prasad Koirala said.

"We recovered one more dead body, bringing our toll up to nine people," he told AFP after returning from the site on Sunday, adding "according to our data, 155 people are still missing."

As police and soldiers kept up their search for the victims, thousands of people downstream across the border in India were being evacuated amid fears of flash floods from the landslide.

Nepalise workers were attempting to clear landslide debris which dammed the Sunkoshi river and created a large lake. The river runs downstream into India's eastern state of Bihar as the Kosi river.

Authorities in Bihar have evacuated more than 44,000 people amid fears that a torrent of water could inundate villages and farms if the dam across the border suddenly broke, officials said.

"It would affect a large part of the state and may hit hundreds of thousands of people," Vyas Ji, principal secretary of Bihar's disaster management department, told AFP.

Disaster response teams and their boats have been deployed in Bihar, along with soldiers, while six military helicopters and navy diving teams were on standby, the Indian government said in a statement.

A military plane was also preparing to leave for Bihar carrying medical teams and equipment, the statement said.

Prime Minister Narendra Modi, who is visiting Nepal, has "expressed concern" over the possible flooding and "directed that all possible assistance should be made available," the statement said.

"Water discharge so far is not alarming. But it cannot be predicted when the flow might increase suddenly," it added.

The Kosi river burst its banks in 2008 and shifted away from its normal course, engulfing swathes of Bihar and killing hundreds of people.

Nepalese workers on Saturday carried out small explosions to clear the debris and break open the dam which had created a large 110-metre (360-feet) deep lake in the river.

At least two hydropower stations have been flooded at the site, forcing them to shut down. A three-kilometre stretch of the Arniko Highway, which connects Nepal with Tibet in China, has also been submerged and been closed.

As India stepped up evacautions, Nepal's Koirala said the risk of flooding appeared to be reducing. Officials have also opened a barrage on the river near the India-Nepal border to allow more water to flow downstream, he said.

"The water is gradually clearing out, the artificial lake created due to the blockage is shrinking, so the danger is lessening," he said.

Rescuers on Saturday airlifted 34 people to safety from the landslide site, including 19 who suffered serious injuries.

Scores of people die every year from flooding and landslides during Nepal's monsoon season.

Nepal's landslide came as some 150 people were feared dead in neighbouring India following a landslide which destroyed a village in western Maharashtra state on Wednesday. Ninety two bodies have so far been recovered.