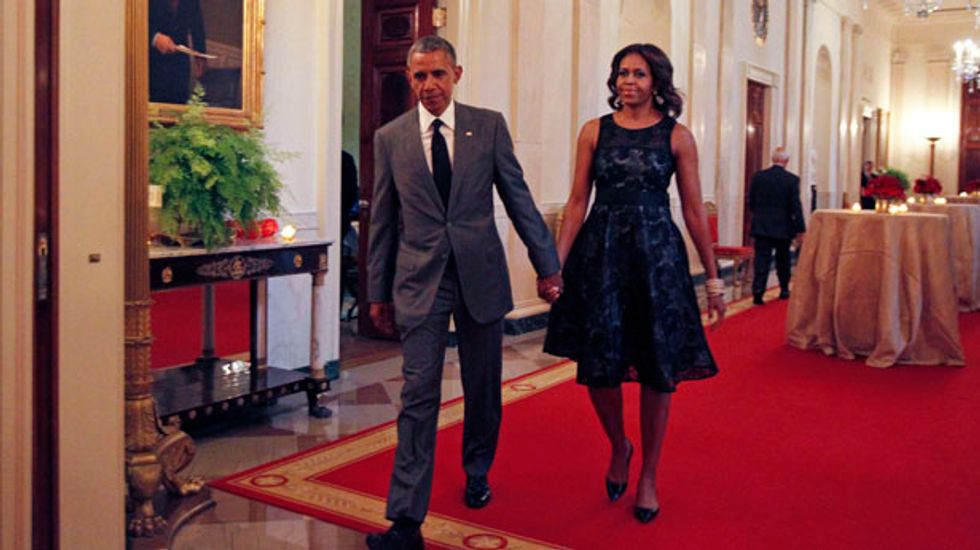 WASHINGTON (Reuters) - Katy Perry, Jason Derulo and Stevie Wonder were all there - but the only guest who got to give President Barack Obama a hug during his speech was restaurant owner Tim Harris.

Harris has Down syndrome, but he owns his own restaurant and is a Special Olympics star in year-round sports.

And the focus was more on the star athletes than on the pop stars at a White House event on Thursday to commemorate the anniversary of the Special Olympics organization.

"Presidents need encouragement once in a while too...Thank you, Tim," Obama said after Harris left his seat during the president's remarks to give him a hug, Harris' trademark at his restaurant in Albuquerque, New Mexico.

Established in 1968, the Special Olympics give people with intellectual disabilities opportunities to participate in sports ranging from basketball and bowling to figure skating and gymnastics.

Obama and first lady Michelle Obama will serve as honorary chairs of the Special Olympics World Games in Los Angeles next year. Some 7,000 athletes from 170 countries will take part.

Obama praised the other set of athletes in the room, including Loretta Claiborne, the first Special Olympian to speak to the United Nations General Assembly and Dustin Plunkett, Special Olympics "international global messenger" who wrote that the organization had "saved his life."

Seven athletes told their stories after the dinner before Katy Perry started her concert with her hit "Roar."

"We are here to put an end to the injustice and captivity and intolerance," said Ricardo Thornton, recently appointed by Obama to the president's Committee for People with Intellectual Disabilities. Thornton said he had spent time in two institutions but Special Olympics changed his life.

And Claiborne said because of Special Olympics, she converses in four languages, holds two honorary doctorate degrees and has run 26 marathons.

"The days of being left out are over," she said.