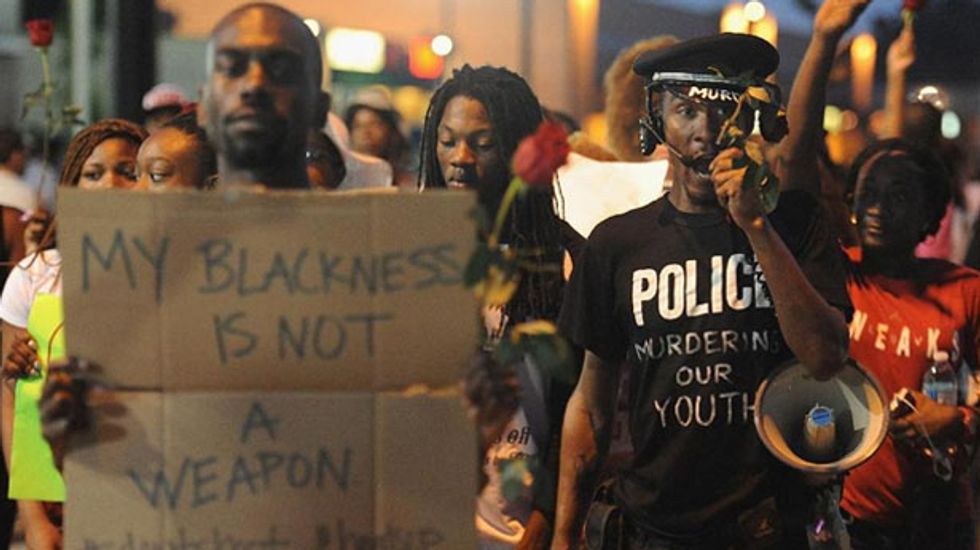 Under a photo of Barack Obama carried by demonstrators in a town rocked by racially-charged protests, the appeal to America's first black president is loud and clear: "Please come now."

The poster is among those waved by demonstrators in Ferguson, Missouri, where an unarmed black teenager was shot and killed by a white policeman nine days ago, touching off days of unrest.

It summarizes, in part, the huge hopes stirred in the African-American community by Obama's historic election win.

But it also touches on a question that has loomed large since Obama took power in 2009: should he get more directly involved when a local incident raises the issue of racism.

The United States is a country where segregation was abolished only half a century ago in some southern states, but now has a black president walking a fine line on still highly-charged issues.

Obama spoke out Monday on the latest unrest.

In a carefully worded speech, he urged law enforcement forces to show restraint and the demonstrators to avoid violence, which he said weakens any quest for justice more than it strengthens it.

But when he was asked whether he planned a personal intervention in a drama that has gripped the nation for more than a week, Obama appeared to rule out anything so dramatic as a visit to Ferguson.

"As Americans we've got to use this moment to seek out our shared humanity that's been laid bare by this moment," he said.

"I've said this before, in too many communities a gulf of mistrust exists between local residents and law enforcement," he added.

"In too many communities, too many young men of color are left behind and seen only as objects of fear."

But he also warned that fighting racial discriminations is a long term project that America has been working on for 200 years, as if to play down the idea that he alone can be some kind of savior.

Since the end of his first term, Obama, elected thanks to strong support from minorities, has warned against expecting too much.

"I never bought into the notion that by electing me, somehow we were entering into a post-racial period," he told Rolling Stone magazine in April 2012.

- Time for a strong message -

Sherrilyn Ifill, president of the NAACP Legal Defense Fund, the legal arm of America's largest civil rights group, said it was right for the president to keep a certain distance from day-to-day events.

"We have to be very careful about getting addicted to asking the president to speak into every moment," she said.

Ifill added that the White House in recent days has supported a federal civil rights probe of the Ferguson killing and a separate autopsy separate from the one being done by local authorities.

During the campaign leading up to his first presidential victory, Obama did address relations between African-Americans and whites.

In a speech in March 2008 amid controversy over divisive remarks made his former pastor Jeremiah Wright. Obama said racism is a problem that the United States cannot afford to ignore.

But, after he took power, things got off to a messy start.

In July 2009, Obama was forced to apologize after he labeled as "stupid" the arrest of a black friend and speculated over racial motivations, without having all the facts in hand.

A turning point came in the case of Trayvon Martin, a 17-year-old black male shot dead in February 2012 in Florida by a member of a civilian anti-crime patrol while walking in residential neighborhood.

After a trial in which the defendant was acquitted, having pleaded self defense, Obama spoke in very personal terms.

While not criticizing the verdict, he spoke of the "pain" the decision caused among blacks. "Trayvon Martin could have been me 35 years ago," he said.

Adolphus Pruitt, president of the St Louis chapter of the NAACP, said events in Ferguson justified Obama turning "his focus on dealing with the plight of the disenfranchised population of this country."

"Now is the time for an extremely strong message to be put out," Pruitt said. "Now some of the focus has to be shifted to the people who are Michael Brown's neighbors."