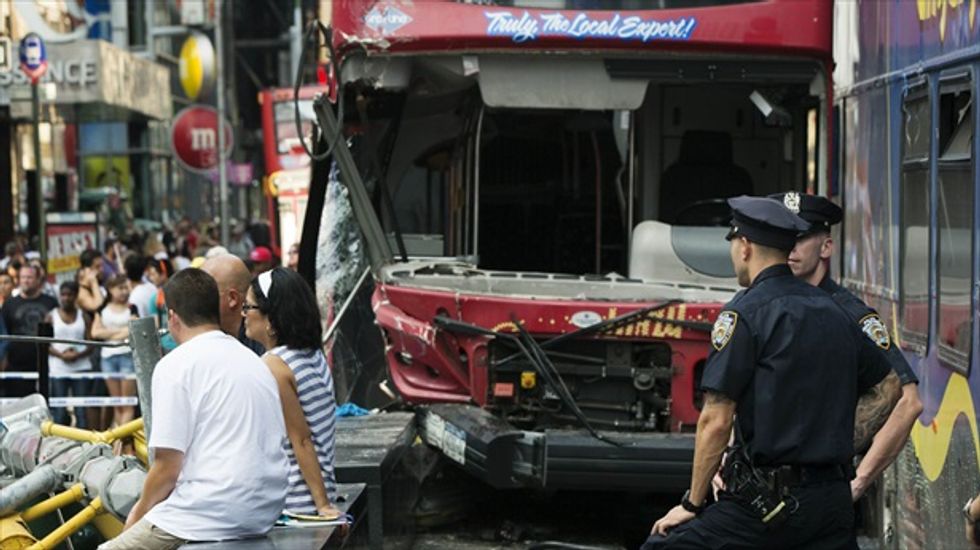 The double-decker buses collided near 47th Street and 7th Avenue, where a light pole holding a traffic signal lay toppled onto a pedestrian plaza packed with gawking visitors and street entertainers dressed as Minnie Mouse, Elmo and other characters.

Of the 14 people with confirmed injuries, three were seriously hurt and some were transported to Roosevelt Hospital for treatment, New York Fire Department official Roger Sakowich said.

Most of the people were hurt by the falling pole and were not passengers on the buses, Sakowich said.

The tour guide on one of the buses was trapped under a crushed dashboard and had to be removed by emergency responders, but she was not seriously injured, he added.

"We just suddenly heard this big boom," said Orville Anderson, who was sitting with his nephew near the site when the crash occurred on Tuesday afternoon.

"I saw the pole tumbling down to the ground," said Anderson, who said he also saw a woman lying on the ground who appeared to have broken her arm. He was sharing iPhone video he took of people climbing out of a wrecked bus with police. Half a dozen emergency vehicles, including ambulances and fire trucks, were at the scene. One of the buses had its front section sheared off and one side smashed in.

A middle-aged man wearing shorts and sneakers had a 2-inch (5-cm) gash on his cheek and a bloodied hand wrapped in gauze. He stood talking to a younger man whose elbow was wrapped in gauze. Nearby a woman in her 20s holding an "I Love New York" bag wiped away tears.

Police said they were still investigating and had no further information about the cause of the accident.

[Image: New York Police Department officers stand at the scene of a collision between two tour buses in the Times Square region of New York August 5, 2014. By Mike Segar for Reuters]