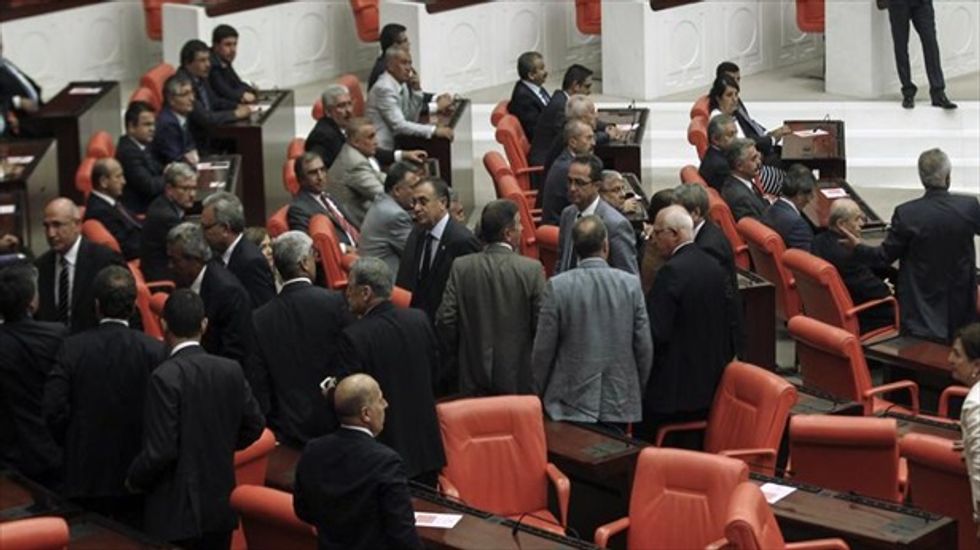 Ankara (AFP) - Turkey's outgoing premier Recep Tayyip Erdogan was sworn in as president on Thursday, extending his decade-long rule, as opponents who accuse him of authoritarianism stormed out of the ceremony.

Erdogan, 60, took the oath in Ankara to begin a five-year mandate in which he has vowed to build a "new Turkey" by pushing through a new constitution and pushing forward with an ambitious development programme.

Deputies of the opposition Republican People's Party (CHP) -- who accuse Erdogan of violating the constitution -- angrily walked out of parliament just before he was sworn in.

CHP deputy head Engin Altay hurled the rule book containing parliament's procedures across the chamber as his MPs marched out before Erdogan was sworn in to thunderous applause from supporters.

Erdogan has made clear he wants to wield genuine executive power as president after becoming the first directly elected head of state, taking 52 percent of the vote in the August 10 poll.

"I am the first president elected by popular vote in our country's history as well as the Turkish nation's 2,000 year-old history," Erdogan said in a later ceremony where outgoing president Abdullah Gul handed him the Cankaya presidential palace.

"I know that it's a much bigger responsibility and a bigger weight on me," said Erdogan, accompanied by his wife Emine.

The election was a triumph for Erdogan -- who first become premier in 2003 -- after surviving a tumultuous 2013 that saw mass anti-government protests and corruption allegations against his inner circle.

Gul, a former close comrade and co-founder of the ruling Justice and Development Party (AKP), appears now to have fallen out with the feisty Erdogan and is expected to play no role in the next government.

Immediately after the handover ceremony, Gul and his wife Hayrunnisa headed to the airport and a life outside of politics in Istanbul.

At the same time, police in Turkey's largest city Istanbul used water canon to disperse around 200 protesters who had gathered at the end of the famous Istiklal Street shouting slogans against Erdogan, an AFP photographer reported.

Erdogan's five-year presidential term means he will have ruled Turkey longer than its modern founder Mustafa Kemal Ataturk, who established the republic out of the ruins of the Ottoman Empire.

He can serve two mandates and so could theoretically stay in power until 2024, which would allow him to see in the 100th anniversary of modern Turkey in 2023, and portray himself as a historic figure to rival Ataturk.

Taking his oath of office, Erdogan swore to "abide by the constitution, the rule of law, democracy, the principles and reforms of Ataturk, the principles of the secular Republic."

In line with tradition, he laid a wreath at Ataturk's vast Anitkabir mausoleum in Ankara, saying that the "bond between president and people" had weakened since Ataturk's death in 1938.

But opponents have accused Erdogan of seeking to undermine Ataturk's secular legacy by imposing a creeping Islamisation of society.

Controversially, he wants parliament to change the constitution after the 2015 legislative election to invest the presidency with more powers.

"We are faced with a man who places himself above the law and does not abide by any rule. This kind of mentality is unacceptable," said CHP leader Kemal Kilicdaroglu.

Altay explained his book-throwing antics, saying: "It was a democratic reaction. I would do it again."

Heads of state from a dozen nations in Eastern Europe, Africa, Central Asia and the Middle East attended the ceremony, the Anatolia news agency reported.

But leaders of top Western states were conspicuous by their absence in a possible sign of suspicion towards Erdogan's strongman tendencies.

The United States only sent its charge d'affaires in Ankara, in what some commentators saw as a clear snub.

Ukraine's President Petro Poroshenko had to cancel his trip due to the advance of pro-Russian forces in the east of his country.

Taking over Erdogan's post of prime minister is Foreign Minister Ahmet Davutoglu, 55, a long standing ally who is expected to do little to challenge the Turkish number one.

Davutoglu was confirmed as party leader on Wednesday at a vast AKP congress at which both men vowed there would be no change in policy, despite the changeover.

He will form a new cabinet by Friday, with intense speculation over who will hold the top jobs, with the head of Turkey's intelligence service Hakan Fidan a possible new foreign minister.

Davutoglu, who became foreign minister in 2009, is a controversial figure blamed by some for pursuing an over-ambitious foreign policy that led to the rise of Islamic militants in Syria.