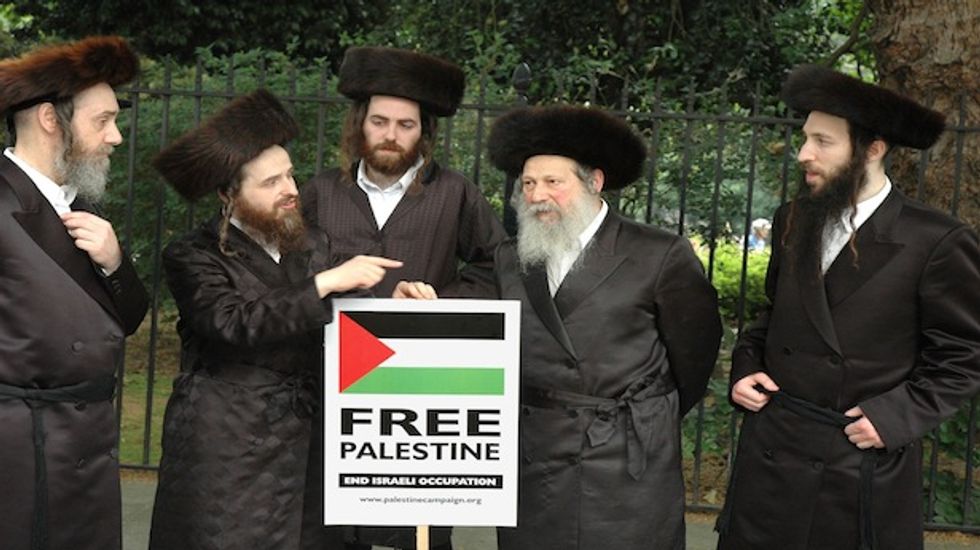 The Right Wing and even  PEPs (Progressives Except on Palestine)  like to perpetuate the lie that any criticism of Israel is essentially or practically anti-Israel or Anti-semitic. This is an absurd argument for many reasons.

1) Being a hawk does not make you patriotic: When the argument comes from PEPs, it's dishonest or delusional, because as any "progressive" or liberal knows, it's more than possible to be critical of a government without being against its people. In the case of the war in Iraq, for instance, people who opposed the war are not "anti-American."

2) Being a hawk on Israel is anti-Israel and anti-Israeli: It could easily be argued, in fact, that the people who did not want America to enter into a war based on lies, which would create more anti-American sentiment abroad, kill and maim and sicken American soldiers and cost trillions of American taxpayer dollars are more "pro-American" than the "USA! USA! USA!" "pro-American" patriots who supported the war. It's a fairly straightforward and simple concept. And one that PEPs should get. And when they defend Israel by asking, "What would the United States do?" I always respond, "They would do something similarly atrocious and you, yes, you would go to a demonstration in Union Square or Washington DC to protest it. But, because it's Israel, you don't."

3) Zionism requires criticism of Israel. Although many of my cohorts on the Left would disagree, you can, I would strongly argue, be a Zionist and be critical of Israel at the same time. I have problems with J Street, the (relatively but not really) left alternative to AIPAC, especially since they have refused to condemn Israel's attack on Gaza. But I think their goal of being "pro Israel, pro peace," is a good tactic and a legitimate position, at least in theory.  But the existence of Israel and the safety and security of its people is possible only with a two state solution, which is impossible under occupation. As the late Holocaust survivor, Zionist and pro-Palestinian, honorary French ambassador Stephane Hessel said,

The future of Israel depends, in my mind, on finding a way to have a neighbor with the Palestinians who can be a good and pleasant neighbor with whom one can work. But as long as one occupies that country, that makes this terrible business of Cast Lead on Gaza—those things are horrifying to my mind.

Though, it must be said, that supporting peace and the current government is impossible. Again, to quote Hessel, "leadership in Israel by people like Netanyahu and Lieberman is just against all basic Jewish and democratic value."

4)  Anti-Zionism is not anti-Semitism. And even anti-Zionism does not mean anti-Semitism. There are, of course anti-Semitic anti-Zionists. But there are also anti-Semitic Zionists, as in Christian Zionists who want Jews to go back to Israel, so they can help fulfill their rapture prophecy, wherein all Jews, except 144,000 who will have converted, will burn in eternal damnation.  A wide range of Jewish groups from the Orthodox Neturei Karta Orthodox Jews, to the left wing International Jewish Anti-Zionist Network embrace a Jewish identity while rejecting Zionism. Are they really all self-loathing? Zionism is not a religion or ethnicity or culture, like Judaism or Jewishness. It is an ideology and political system. In order to prove that an anti-Zionist is anti-Semitic, you would have to prove that his or her opposition is motivated by a hatred of Jews and not, say,  opposition to a religious state, regardless of the religion, and a commitment to human rights and international rule of law, etc. Unfortunately, there are lots of reasons, other than anti-Semitism, for people to have a problem with Israel.

The Arizona Senate’s partisan “audit” last year claimed 282 dead voters cast a ballot in the 2020 general election in Maricopa County, but Arizona Attorney General Mark Brnovich said only one of those was genuine, according to a letter he sent to the Senate on Monday.


“Our agents investigated all individuals that Cyber Ninjas reported as dead, and many were very surprised to learn they were allegedly deceased,” Brnovich wrote in his letter to Senate President Karen Fann.

A California man with serious health problems died in a San Diego jail after his second arrest in three days for being intoxicated, but his daughter said he had diabetes and dementia.

Gilbert Gil lay dead in a jail cell for 15 hours after his second arrest in February, and daughter Jennifer Schmidt said the sheriff's department still hasn't provided any details about his cause of death and the medical examiner hasn't issued a report or surveillance video, reported KFMB-TV.