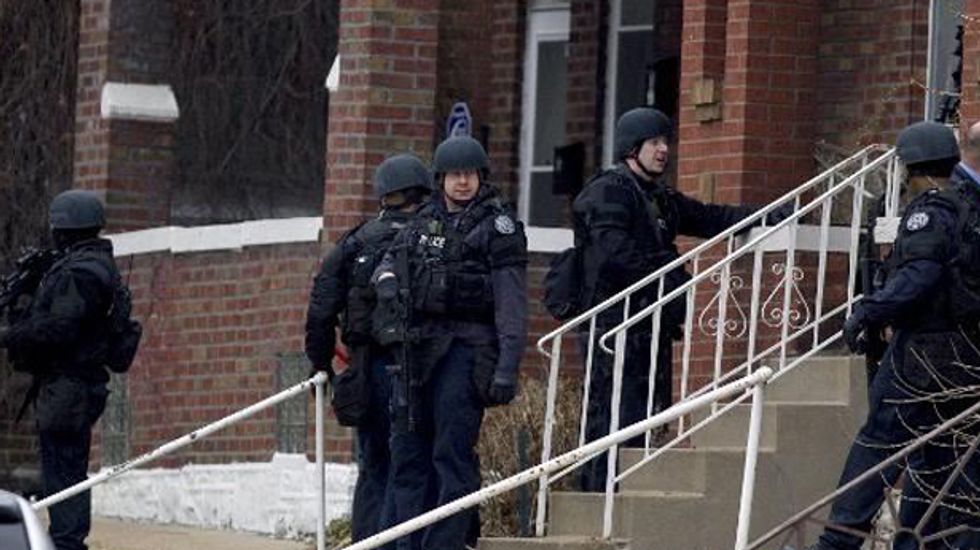 Protesters clashed with police and looted stores in the Midwestern US city of St. Louis, a day after an officer shot dead an unarmed black teen, local media reported on Monday.

Police armed with clubs hurled tear gas and deployed officers with dogs to curb the violence which erupted late Sunday in the suburb in Missouri, media report.

But local law enforcement officers were quickly overwhelmed and had to urgently call for backup from nearby communities, KSDK TV 5 said.

The violence broke out after large crowds of mostly African-American protesters gathered Sunday for a vigil at the spot where police shot and killed 18 year-old Michael Brown a day ago.

Details of Brown's death differ. A witness identified as Dorian Johnson told KMOV News 4 that he was walking with Brown when a police officer confronted them and drew his weapon.

The officer shot Brown, who "turned around and put his hands in the air," Johnson said. "He started to get down and the officer still approached with his weapon drawn and fired several more shots."

St. Louis County Police Chief Jon Belmar however said at a televised press conference that Brown was killed after physically assaulting a police officer and struggling to get his weapon.

Belmar did not say if the officer was white.

The incident brings to light the tension between the mostly white local police force and the African-American community, the Post-Dispatch said.

The St. Louis County chapter of the NAACP civil rights group said in statements that it has launched an investigation, and is calling for a meeting Monday "in response to the recent murder of Mike Brown".

Chapter president Ester Haywood also called on the community to "settle down" in an interview with KSDK 5 TV station.

Brown's family has hired attorney Benjamin Crump to represent them, the Post-Dispatch said.

Crump is the lawyer who represented the family of Trayvon Martin, the black teen shot and killed in Florida by George Zimmerman, a neighborhood watchman in February 2012.

Zimmerman, a mixed-race Hispanic who pleaded self defense, was acquitted the following year of second-degree murder and manslaughter -- sparking anger among many Americans who thought his actions had been racially motivated.