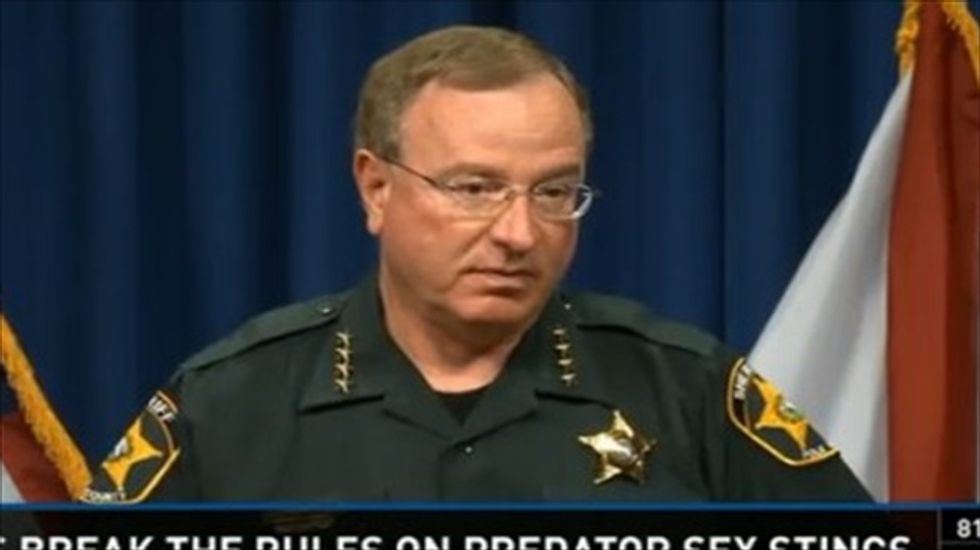 Judges have also criticized the operations, led by Polk County Sheriff Grady Judd, for entrapping suspects. In one case, a judge said it was an undercover agent "who repeatedly steered the conversation back to sexual activity with a minor." The charges in that case were dismissed.

Earlier this month, Judd called a press conference touting the arrests of 132 men in one operation despite the fact that charges were dropped against many of them.

"There is a difference between probable cause and 'beyond and to the exclusion of every reasonable doubt,'" Judd stated at the Aug. 6 press conference. "And let me tell you one thing so there's no misunderstanding -- when we arrest them as 'sexual perverts on children,' I'm going to call them 'sexual perverts on a child.'"

But according to arrest affadavits, several of the cases pursued by Judd's task force involved detectives initiating contact with men on dating sites like PlentyOfFish.com who believe the detectives are actually adult women. The documents stated that after starting a correspondence, detectives would portray themselves as minors and encourage the men to continue communicating. In one case, a detective sent a target of the investigation a picture of a woman wearing a wedding ring.

Judd has also refused to release several public records, including the language used by detectives in their posts used to bait suspects and how they responded when the men with whom they were exchanging messages indicated they did not want to speak to an underage girl, even though he acknowledges that the majority of men targeted by the sting do just that. The sheriff has argued that those individuals are still "under investigation," making them exempt from public record requests.

WTSP also reported that, out of at least 1,200 people arrested in the sting operations since 2008, 97 percent had not committed any sex-related offenses.

Sheriff's departments in Citrus, Manatee, Pinellas, and Sarasota counties have participated in Judd's task force, as have the police departments in Clearwater, North Port, and Orlando.

However, other agencies, like the sheriff's department in Pasco County, have refused to take part in the operations, citing a low jail time for those caught.

"You spend your resources, you arrest somebody and then they walk right out," Pasco County Sheriff Chris Nocco told WTSP. "It's the biggest waste ever."

Watch Part 1 of WTSP's investigation below.