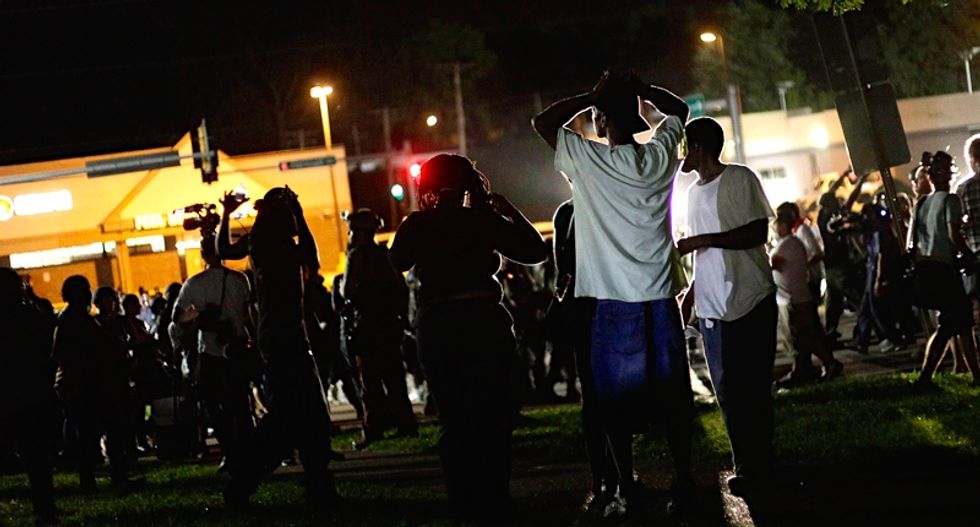 For a third consecutive night, restraint prevailed at protests on Friday in Ferguson, Missouri, as the National Guard began withdrawing from the St. Louis suburb racked by turmoil after a white police officer shot dead an unarmed black teenager.

Hundreds of protesters marched in the hot summer night near the site of the Aug. 9 slaying of 18-year-old Michael Brown, chanting "Hands up, don't shoot," while police vehicles observed the demonstration, without intervening.

After dwindling in numbers, the protesters, marshaled by volunteers from the clergy, made their way to a parking lot across from the police station, where they prayed and chanted while about 20 officers stood in a line outside.

Earlier at St. Mark Family Church, a hub for protest organizers, activists and residents met to pray and work on plans to improve the predominantly African American community of 21,000 in the wake of unrest that has focused international attention on often-troubled U.S. race relations.

Despite a notable easing of tensions in recent days - police made only a handful of arrests on Wednesday and Thursday - authorities braced for a possible flare-up of civil disturbances ahead of Brown's funeral, which is planned for Monday.

Police in Ferguson came under sharp criticism, especially in the first several days of demonstrations, for arresting dozens of protesters and using heavy-handed tactics and military gear widely seen as provoking more anger and violence by protesters.

In the latest embarrassment for local law enforcement, an officer from the St. Louis County Police Department was removed from active duty on Friday after a video surfaced in which he boasted of being "a killer."

Officer Dan Page, a 35-year police force veteran who had also served in the U.S. military, was removed from patrol duties and placed in an administrative position pending an internal investigation.

In the video, Page is seen addressing a St. Louis chapter of the Oath Keepers, a conservative group of former servicemen, saying, "I'm also a killer. I've killed a lot, and if I need to I'll kill a whole bunch more. If you don't want to get killed, don't show up in front of me."

He also made disparaging remarks about Muslims and expressed the view that the United States was on the verge of collapse.

Two days earlier, another St. Louis-area policeman, an officer from the town of St. Ann, was suspended indefinitely for pointing a semi-automatic assault rifle at a peaceful demonstrator and yelling obscenities.

The incidents have highlighted the racial divide in Ferguson, a largely black town where almost all the police force and local politicians are white. Civil rights activists say Brown's death followed years of police targeting blacks.

A grand jury, made up of three blacks and nine whites, met this week to begin hearing evidence in the case.