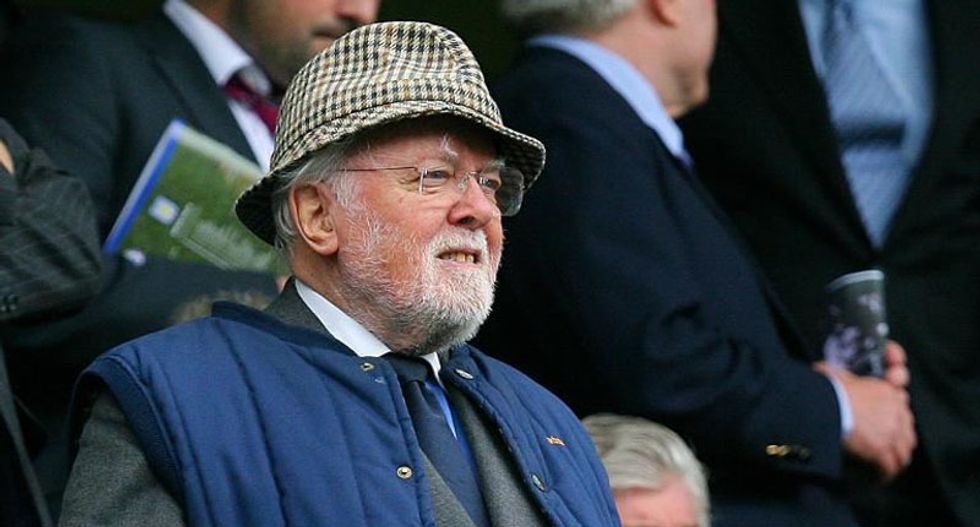 Taking turns as an actor, producer and director and picking up a mantlepiece full of awards along the way, Richard Attenborough, 90, was a much-loved and long admired fixture in the British film industry.

From his first acting role in 1942 war movie "In Which We Serve", the acclaimed "Brighton Rock", through to the multiple Oscar-winning "Gandhi", which he directed, and Steven Spielberg's "Jurassic Park", he dominated the British film industry during a long and hugely successful career.

A member of the House of Lords, he was also tireless in his charity work, including as a goodwill ambassador to UNICEF, was president of the Royal Academy of Dramatic Art (RADA) and life president of Chelsea football club.

A man with strong family ties, he married his wife Sheila at 21, and lived in the same house for five decades in south-west London, an area that was also home to his younger brother David, the famous naturalist and wildlife presenter.

But tragedy struck in 2004 when one of Attenborough's three children, Jane Holland, and her daughter Lucy died in the Asian Boxing Day tsunami. Famously open with his emotions, he said he never quite got over their deaths.

Born in Cambridge in August 1923, he made his big screen debut in 1942 with "In Which we Serve", the Noel Coward-David Lean tribute to the Royal Navy at war, and appeared in more than 60 films over the next 50 years.

The clean-cut young Attenborough became a regular feature in the cheerful, stiff-upper-lip cinema of the postwar years, but he achieved greater distinction in murkier roles, particularly as the villain Pinkie in the 1947 adaptation of Graham Greene's novel "Brighton Rock".

By the 1960s he had come to the attention of Hollywood and obtained regular character roles in such as films as John Sturges's war epic "The Great Escape" and Robert Aldrich's "Flight of the Phoenix".

He had also acquired a taste for production, forming his own company with Bryan Forbes to make "The Angry Silence" and other social realist films such as Forbes' own "The L-Shaped Room".

In 1962 Attenborough was approached by an associate of the family of Mahatma Gandhi about making a film about the life of the founder of independent India. Although he had no familiarity with the subject, or with India, he met Pandit Nehru and his daughter Indira Gandhi the following year.

It would take another two decades for the project to be realised -- by 1980 Attenborough had secured the money, and "Gandhi" became his biggest success.

By this point Attenborough was an old hand at directing -- his first attempt in 1969 was "Oh! What a Lovely War", a satire set on Brighton Pier, and he later delved further into patriotism with the 1972 "Young Winston", the first of what was to become a lengthy series of biopics.

He continued acting occasionally, pausing to direct the 26-million dollar war epic "A Bridge Too Far" (1977) and "Magic" (1978), starring Anthony Hopkins, while picking up a knighthood along the way.

After "Gandhi", he tried his hand at something much more light-hearted in "A Chorus Line" (1985), before turning back to the more weighty, though politically-safe, biopic "Cry Freedom" (1987), about murdered anti-apartheid activist Steve Biko.

Attenborough stayed behind the camera throughout the 1980s, but was enticed back onto the big screen by for Spielberg's dinosaur blockbuster "Jurassic Park" in 1993 and its sequel.

In 1994, he played Santa Claus in the family drama "Miracle on 34th Street", and supporting roles in Kenneth Branagh's "Hamlet" and Shekhar Kapur's "Elizabeth" followed later.

As he passed 80, Attenborough slowed down but kept working, including writing his memoirs, "Entirely Up to You, Darling", with close friend Diana Hawkins.

Towards the end of his life Attenborough moved into a care home with his wife.

Outside the world of movies, Attenborough was a lifelong supporter of Chelsea Football Club and was made life president in 2008 after serving as a director since 1969.