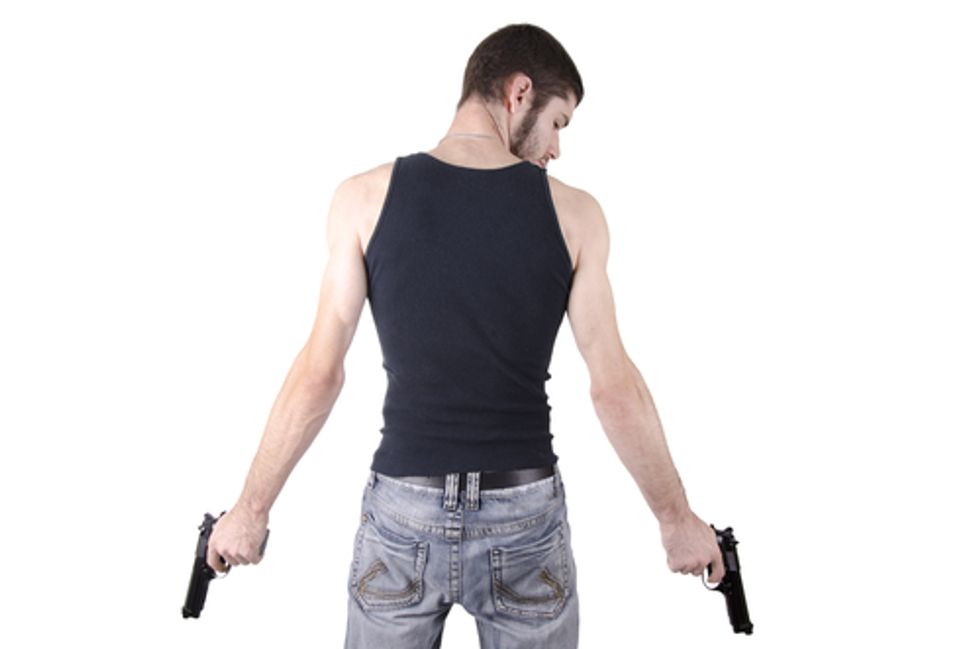 Being seen with your gun is a good motivator for buying more guns.

I've noticed a dramatic uptick in gun nuts talking about how people need to learn to be "comfortable" around guns, which has, in turn, led to this whole "open carry" bullshit, which uses the line that it's good to be "comfortable" around guns as its justification. (However, the emotional motive behind swinging a gun around in public is still the desire to dominate and terrify, but we're all familiar with the glib ease with lying that is widespread on the American right.) There's even a children's book pushing the idea that it's wholesome family fun to "open carry". When I was young and growing up in gun-loving Texas around gun-loving people, the notion that you should just be tossing guns around and displaying them everywhere like some yahoo---the idea that guns are safe and we should feel "comfortable" around them---was strongly discouraged. Guns were locked away and we were told that they are very dangerous. But while that's surely a smarter move if you want to minimize accidental shooting, the correct belief that guns are dangerous had to go because it's clearly stifling gun profits. There's still a little bit of talk about gun safety on the right, but it's just a little ass-covering. The emotional pitch now is that guns are safe and they should be everywhere all the time until you forget how fucking dangerous they really are.

This is all corporate marketing 101. No doubt the very real fear that guns are dangerous---backed by statistical evidence showing that having one in your house raises your chances of being murdered or assaulted by gun, being shot by accident, and committing suicide---is a huge barrier to selling more guns. So just like the ads in the 50s that tried to calm consumer fears of cancer by showing doctors smoking, there's a push to signal that guns are not dangerous. You should just have them laying around all the time. You should strap them to your body! Guns should just be so familiar you completely forget that they can blow your head off if you handle them incorrectly. They're so safe we should have kids firing them to pass on to the next grade! They're just like very expensive action figures and you should collect them all!

The shift from concealed carry to open carry as a focal point is also indicative of how much the discourse on guns on the right is being shaped by the gun industry's desire to sell more guns. Anyone who knows anything about markets knows that conspicuous consumption is a huge driver of profits, and that convincing people that owning your product will say something about them as a person is a really good way to sell widgets. (Anyone who claims they're immune to this is probably lying, and you can find their iPhone on them somewhere---or their Android, with which they signal how they're different and smarter than everyone else.) With guns, the fact that people lock them away or hide them on their person, therefore, is clearly stifling sales. Shifting towards arguments about how people need to be "comfortable" with guns and open carry is better than concealed carry allows people to display their guns. Being able to use guns to signal your identity to others---or to make others believe you are tough---shifts guns directly into the conspicuous consumption category, which is huge for gun sales. Entire industries are built on selling stuff that's main purpose is showing off that you own this particular item, which any purse manufacturer or luxury car salesman can tell you.

Then there is this:

Yes, he's arguing that guns are so safe that blind people should feel comfortable owning them. The NRA commentators always have this disclaimer up top that says the commentary doesn't reflect the organization's views. That said, it's not like it's arbitrary what gets up there. Liberal websites host disagreement but the general principle of advancing liberal values tends to be adhered to.

And this shows, yet again, how much the NRA is not really about "rights" and they have clearly abandoned the commitment to safety that used to be their primary goal. Instead they exist largely as a marketing organization/industry lobby that works mostly to promote the profits of the gun industry, in this case trying to convince people guns are so safe that blind people can use them. This video isn't really about the needs of blind people, but about convincing a mostly non-blind audience that guns are super duper safe, and therefore they should run out and buy some more guns.