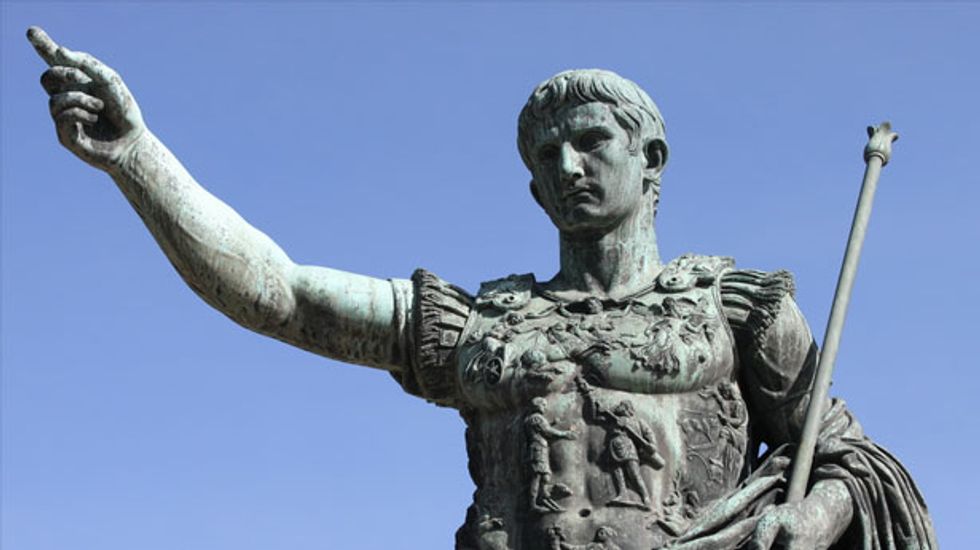 By Alice Borchi, University of Warwick

Augustus, who died 2000 years ago, was the first emperor of Rome. He brought peace after the turmoil in the republic after the assassination of Julius Caesar when he defeated the forces of Antony and Cleopatra. But despite this, two millenia after he bestrode the world, his mausoleum lies in disrepair under piles of rubbish while his celebrated stables, only discovered five years ago, are to be reburied due to lack of funds.

There’s a rich agenda of special and extravagant events in Rome as it celebrates the 2000th anniversary of the death of Augustus. The city is packed with cultural events, from special exhibitions to the re-enactment of ancient Roman rites. But the restoration of these important monuments are a step too far – one that simply can’t be afforded.

The mausoleum of Augustus is the monument that should be a star of the celebrations. Their restoration works, which are part of a larger project that aims to convert the square surrounding the monument into a pedestrian area, began in 2006, but have been interrupted for years. The work was a project of the local government and the negligence of the city council appears to be the cause of the progressive degradation of the area. Rubbish piled up against the pillars of the portico and eventually the restoration site became first a toilet and then a shelter for a group of homeless people.

These inhabitants of Augustus’s burial place converted the fences into clothes hangers and one of them even built a shop for his artworks. Since this spring the situation improved as the square has been partially cleaned; but the mausoleum is still closed to visitors. There are hopes for its reopening at the end of 2014, but I’m certainly not holding my breath.

And then there are Augustus’s fabled stables, discovered during the construction of a new underground car park in the heart of Rome. The plan was to have them open to visitors by the time of the current celebrations, but now they are to be reburied due to lack of funding.

Their discovery in 2009 was deemed an extremely important archaeological find, making for a unique opportunity to study the structure of the stables in the Roman era and the organisation of the games held in the Circus Maximus. But despite the value of this project, the efforts of the society in charge of the excavations have the tragic futility of Sisyphus’ curse.

Five years of work and €5m are to be buried under a thick layer of “pozzolana”, a material made of volcanic ash. The stables will be left to rest there, protected from erosion, until new funds become available – perhaps for the rediscovery of future generations. The car park will be built, but its new location has yet to be decided upon.

There are no public funds for such restorations and there are unlikely to be. But Ialy’s minister of cultural heritage, Dario Franceschini, has been inviting foreign investors to help the country to preserve its artistic and historical beauties. The minister told the New York Times:

Our doors are wide open for all the philanthropists and donors who want to tie their name to an Italian monument … We have a long list, as our heritage offers endless options, from small countryside churches to the Colosseum … Just pick.

Italian luxury shoe brand Tod’s was certainly happy to finance the restoration of the Coliseum – gaining copyrights and incomparible visibility along the way. And Fendi didn’t miss the opportunity to sponsor the Trevi Fountain, where beauty and fashion icon Anita Ekberg took a bath in Fellini’s La Dolce Vita.

But the recently discovered and less famous stables did not attract local or foreign sponsors. Despite its historical importance, the site is not so appealing to corporate brands who look for prestige and visibility in such ventures. The stables require a massive investment of time and money, they cannot be open to visitors before the completion of a long process of excavation and restoration – and they won’t make for a good film location anytime soon.

Worryingly, the growing power of the corporate sector in arts and heritage funding very possibly may bring a serious change in our conception of cultural heritage – from majestic symbols of our past, to expensive advertising gimmicks.

And so the bimillenary of Augustus takes us on a bizarre tour from car parks to cardboard boxes. As we celebrate Rome’s past grandeur we find the Divus Augustus’s tomb covered in not very divine garbage, and consign an archaeological gem to rest under the streets. Until, perhaps, a mega fashion brand from the future decides to dig it up for some fabulous campaign or other.

Alice Borchi does not work for, consult to, own shares in or receive funding from any company or organisation that would benefit from this article, and has no relevant affiliations.