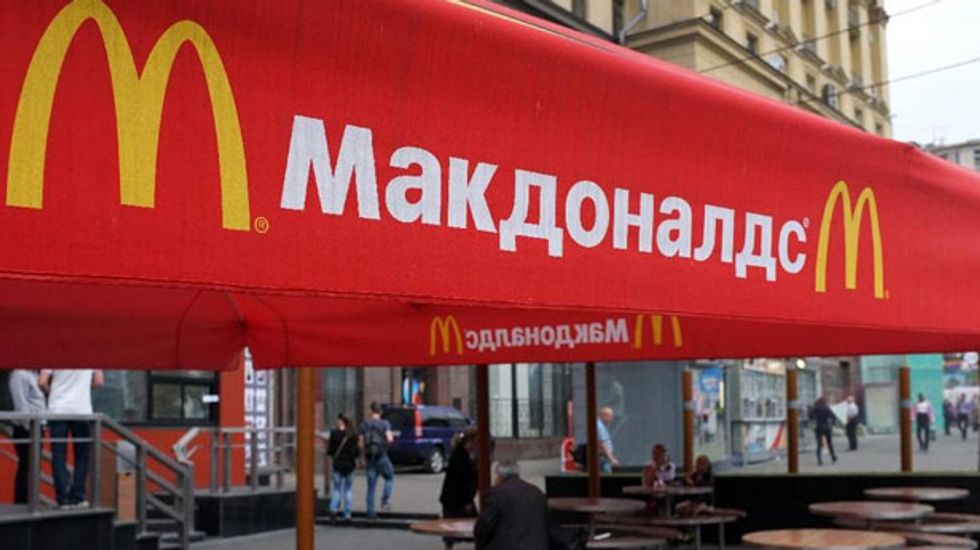 People sit on the terrace of a closed McDonald's restaurant, the first to be opened in the Soviet Union in 1990 (AFP)

It was the latest and arguably most resonant salvo in an escalating and economically-bruising trade war over a bloody conflict in Ukraine that has plunged East-West relations into what some have dubbed a "new Cold War".

Russia has a long and varied history of using sudden food safety concerns as a political weapon against unfriendly states.

It has cited health grounds to ban Ukrainian products and halted imports of Georgian wine months before going to war with the Caucasus nation in 2008.

Washington and its EU allies have imposed restrictions on broad sections of Russia's economy in response to the Kremlin's perceived attempts to carve up Ukraine as punishment for its decision to anchor its future with the West.

Russia responded by blacklisting nearly all US and European food imports and threatening even more drastic measures that could effectively cut off the country from Western goods for the first time since the Soviet era.

But the most emotive attack on the United States came Wednesday when Moscow health authorities locked up a McDonald's restaurant that had opened its doors in the final years of Communism and because a symbol of Russia's gradual acceptance of the West.

The iconic central Pushkin Square location had a "closed for technical reasons" sign greeting customers who approached its front door.

"This is a perfectly logical step," said one Muscovite as he shaded himself from the late summer sun at one of the restaurant's outdoor picnic tables.

"They close our businesses abroad -- why not do the same to them here?"

The federal office of the Rospotrebnadzor consumer safety watchdog took the campaign to a new level by ordering checks of McDonald's outlets stretching from the European portion of Russia across the Ural Mountains and into Siberia.

"We have a letter -- it is an order from the federal (Rospotrebnadzor) service that is based on a government decree," an official at the consumer watchdog's Ivanovo district office in central Russia told Interfax.

Moscow's Kommersant business daily suggested that the authorities had no immediate complaints against Burger King because the Russian operations of the number two US fast food chain is nearly half-owned by the investment arm of the state bank VTB.

The paper cited a senior source as saying that the McDonald's probe was being conducted on government orders that apparently had little relation to health or consumer safety concerns.

"That is why the (Moscow) restaurants were immediately closed, even though when scheduled (safety) checks are conducted, first a written warning is issued," the unnamed source in one of Russia's federal agencies told the paper.

Deputy Prime Minister Olga Golodets -- the only senior official to have spoken publicly about Russia's Big Mac attack -- appeared either evasive or uncertain about the formal nature of the investigation.

"These checks are being conducted both according to plan, and because of certain detected cases of violations of health and disease regulations," Golodets said.

McDonald's itself has said little about the investigation and is promising to cooperate with the authorities.

The company -- an engine of numerous local economies that relies almost exclusively on Russian-produced food -- said in a statement it was studying the complaints and remained committed to serving "safe and quality products".

Russia is one of McDonald's most important foreign markets and a target of future expansion. It generated 63.35 billion rubles ($1.7 billion, 1.3 billion euros) in revenue across 438 stores last year.

But analysts said the world's biggest restaurant chain was being subsumed by a wave of state-driven patriotic propaganda that would likely force bureaucrats across the vast country to find fault with its stores.

"Notice how they started with restaurants that are in the heart of Moscow and near the Kremlin," said Restcon consulting company head Andrei Petrakov.

"For us, they are a symbol of the American way of life."