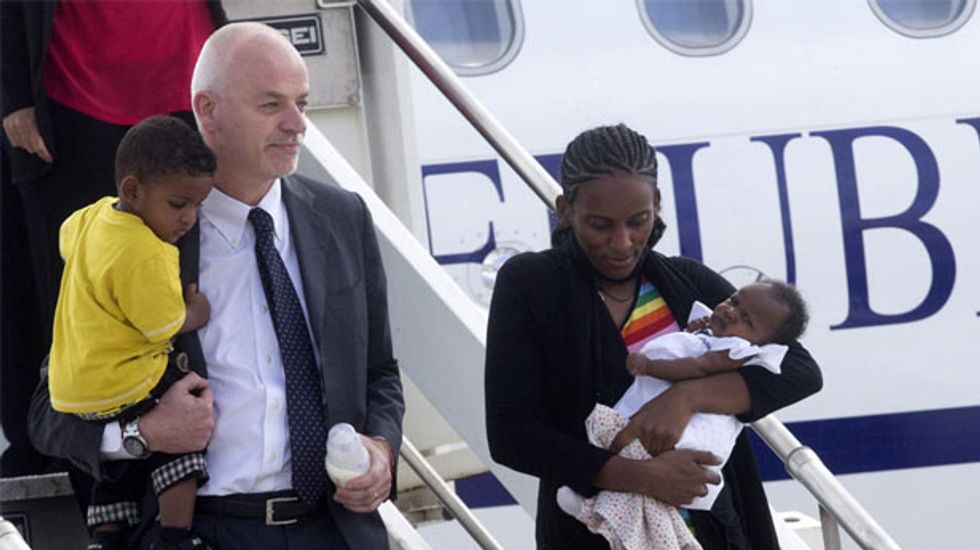 A Sudanese Christian woman -- sentenced to death for renouncing Islam but acquitted after international pressure on Khartoum -- has arrived in the United States with her family.

Meriam Ibrahim Tehya Ishag flew first into the east coast city of Philadelphia Thursday, where she was welcomed by the mayor as a "world freedom fighter," media reports said.

The mayor presented her with a model of the Liberty Bell, a symbol of US independence, the reports said.

The 26-year-old, her two infant children and her US citizen husband Daniel Wani later continued on to New Hampshire, where Wani has family, and was greeted by cheering supporters with balloons and US flags, the reports added.

After leaving Sudan, the family had spent eight days in Rome, where Ishag met Pope Francis, visited the Colosseum, shopped and "learned how to live again," she said.

The White House last week said it was delighted at Ishag's release and looked forward to welcoming her to the United States.

A global outcry erupted in May after Ishag was sentenced under sharia law to hang for apostasy.

Days after her conviction, she gave birth to her daughter in prison.

Ishag's conviction was overturned in June, but she was immediately rearrested while trying to leave Sudan using what prosecutors claimed were forged documents.

Two days later, Ishag was released from prison and she and her family took refuge in the US embassy because of mounting death threats.

Ishag was born to a Muslim father who abandoned the family, and was raised by her Ethiopian Orthodox Christian mother. The Roman Catholic Archdiocese of Khartoum says Ishaq joined the Catholic church shortly before she married in 2011.

She was convicted under Islamic sharia law that has been in force in Sudan since 1983, and that says Muslim conversion to another faith is punishable by death.

The court had also sentenced her to 100 lashings because under sharia law it considered her union with her non-Muslim husband to be adultery.

The case has re-focused attention on a country which has slipped from the international spotlight but where war continues with millions of people in need of humanitarian aid.