Syria ready to cooperate with U.S. and others to stop Islamic State 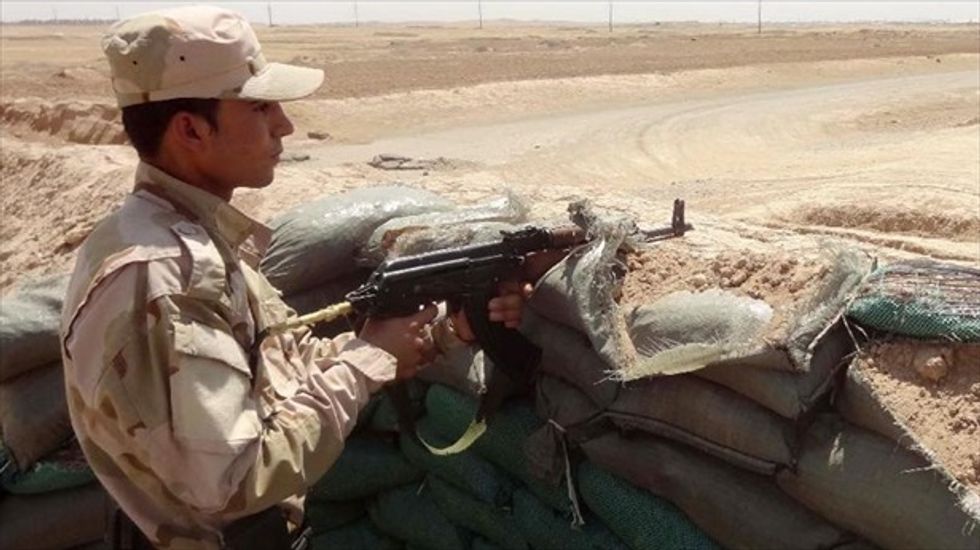 A Kurdish Peshmerga fighter takes a position to monitor security and movements around Kirkuk, northern Iraq on Aug. 24, 2014 [AFP]

Baghdad (AFP) - The UN on Monday accused jihadists in Iraq of "ethnic and religious cleansing" as the most senior U.S. military officer warned they will soon threaten America and Europe.

As condemnation of the Islamic State (IS) jihadist group mounted, Syria -- a pariah over its bloody crackdown on opponents of President Bashar al-Assad's rule -- said it was ready to work with the global community against "terrorism."

"They are systematically targeting men, women and children based on their ethnic, religious or sectarian affiliation and are ruthlessly carrying out widespread ethnic and religious cleansing in the areas under their control," Pillay said.

"Such persecution would amount to crimes against humanity," she added, in a statement.

Iraq is struggling to regain huge tracts of the country after the jihadists led a lightning militant offensive, seizing second city Mosul in June and sweeping through the country's Sunni heartland, as security forces fled.

The IS militants have also taken control of swathes of neighbouring Syria contiguous to the land seized in Iraq, declaring an Islamic "caliphate" straddling both countries.

General Martin Dempsey, chairman of the US Joint Chiefs of Staff, believes that the threat posed by the group will "soon" expand to both the United States and Europe, his spokesman said on Monday.

"He (Dempsey) believes that (IS) must be pressured both in Iraq and in Syria," Colonel Ed Thomas added.

Syria, locked in a civil war with various rebel groups including IS since March 2011, said Monday for the first time that it will work with the international community, including the United States, to tackle the problem.

Foreign Minister Walid Muallem insisted at a news conference in Syria's capital, however, that any strikes on its territory must be coordinated with Damascus.

"Syria is ready for cooperation and coordination at the regional and international level to fight terrorism and implement UN Security Council resolution 2170," Muallem said.

The resolution, passed earlier this month, seeks to cut funds and the flow of foreign fighters both to the Islamic State and to Al-Qaeda's Syrian affiliate, Al-Nusra Front.

Western powers fear the IS "caliphate" -- a successor state to historic Muslim empires -- could become a launchpad for a new round of global terror attacks.

Those fears were exacerbated by the grisly IS beheading of American journalist James Foley, who was abducted in Syria.

Washington has ramped up its rhetoric following the beheading, calling it "a terrorist attack against our country" and said operations against the group in Syria may also be necessary.

But the White House said on Monday that President Barack Obama has yet to make a decision on the Syria strikes.

Citizens from various western countries are fighting for IS, further raising fears that they could carry out attacks at home.

In a statement Sunday claiming a string of attacks in the northern Iraqi city of Kirkuk that killed 24 people the previous day, IS identified two of the three suicide bombers as German.

In Syria, the jihadists on Sunday won a bloody battle for the Tabqa military airport, the last stronghold of the Damascus regime in the northern province of Raqa, a monitoring group and state media said.

The Syrian Observatory for Human Rights said 346 jihadists and almost 200 Syrian troops were killed in the six-day battle for the airport.

The victory gives the IS jihadists full control of Raqa, the heartland of their "caliphate".

On Monday, a suicide bomber attacked Shiite worshippers during prayers in eastern Baghdad, killing 11 people, while at least eight died in two car bombs in the capital's north, security and medical officials said.

The violence comes three days after suspected Shiite militiamen gunned down 70 Sunni worshippers at a mosque northeast of Baghdad.

In the wake of the mosque attack, premier-designate Haidar al-Abadi said there is no place for weapons or armed groups outside Iraqi state control.

"I confirm that weapons must remain in the hand of the state -- there is no place for any armed group," he told a news conference on Monday.

Abadi said he welcomes irregular forces fighting against militants, but they "must all be inside the framework of the state, and under the direction of the state, under control of the military and security forces."