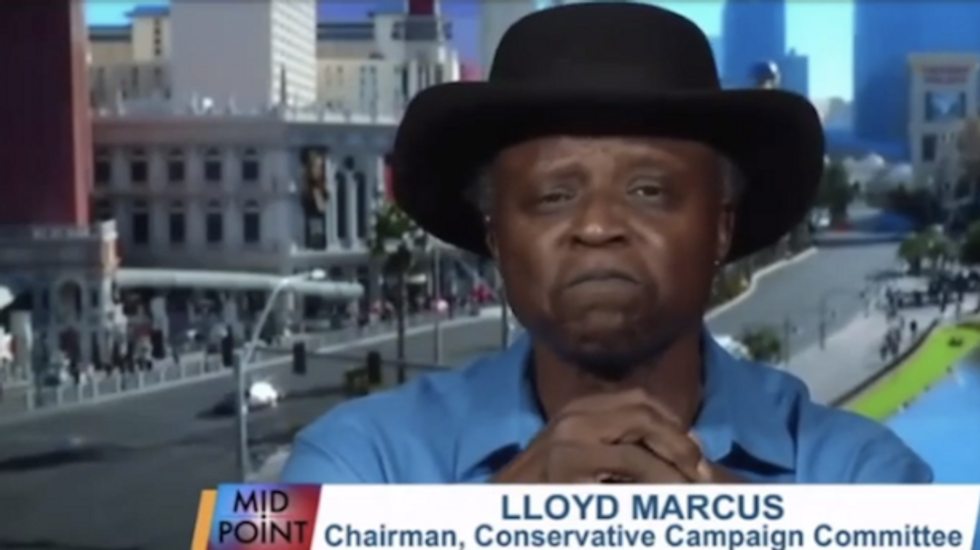 In this culture of hyper-masculinity, it's refreshing to see a man who's not afraid to show his emotions. So, let's give a round of applause to Lloyd Marcus, the emotionally evolved Tea Party spokesman, and chair of the Conservative Campaign Committee, who broke into tears during an interview today with the right wing "news" outlet Newsmax.

Now, those of us who are fans of Marcus, who describes himself as "not an African-American," but rather "An Americaaaaaaan!" know that he's very capable of expressing his emotions. After all, who can forget his compelling headline warning that, "Because [Obama] is Black, Americans Suffer and Die."

The lyrics deserve attention, because they express Lloyd's sensibility, his creativity and his innovation. Look at how he employs an experimental second person shift. I certainly wasn't expecting that. Were you?

Your stimulus is sure to bust.

It's just a socialistic scheme,

The only thing it will do

Is kill the American Dream.

You wanna take from achievers [still talking to President Obama]

And redistribute to those folks

Who won't get out of their easy chair.

We're havin' a tea party across this land.

If you love this country,  [Is he still talking to President Obama?]

Come on and join our band.

We're standin' up for freedom and liberty,

'Cause patriots have shown us freedom ain't free.

So when they call you a racist cause you disagree, [HEYO! Not talking to President Obama anymore!]

It's just another of their dirty tricks to silence you and me.

I believe in the Constitution and all it stands for.

What provoked his tears? Hard to tell. But something hit a nerve, that's for sure. He seemed anguished by interviewer Ed Berliner's suggestion that Tea Party activists refuse to compromise. How painfully insulting! Or perhaps he moved himself to tears, becoming verklempt as he recounted the decency, the wholesome goodness that is the Tea Party.

Or, maybe it's because he had absolutely nothing to say to refute the suggestions made by Berliner. And when in doubt, or caught in an argument you can't win, distract!

Because, let's be honest: the claim that the Tea Party is unwilling to compromise is  pretty hard to refudiate, given  how the they kinda pride themselves on it: "No Compromise. No Surrender. Total Victory."

If this is how he responds to a fellow right-wing wing-nut, I don't even want to imagine the way he would respond to some genuine criticism from someone way to the left, like, just to get a sense of perspective, John Boehner. I can only imagine it would include an even greater outpouring of emotion and, quite possibly, other outpourings, like projectile vomiting and explosive diarrhea.