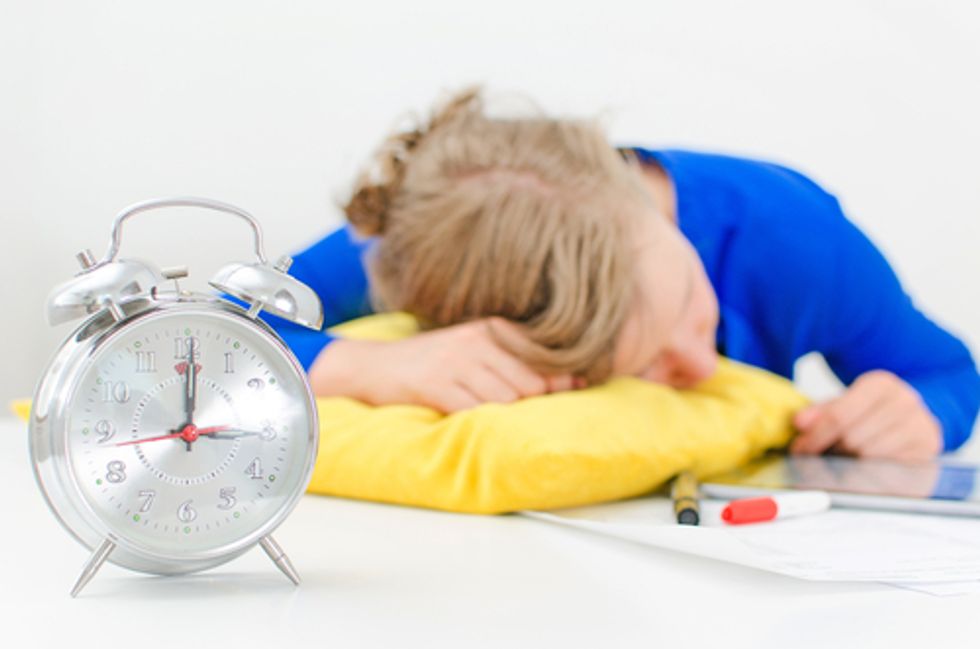 Just give up hope is not real advice.

Sexual harassment is a real obstacle for women who are trying to build up their careers. If you work in an industry where sexual harassment is common and there's few, if any, consequences for men who harass, women are put in an impossible situation of having to choose between their personal safety and their opportunities for advancement. For instance, if going to networking events means getting groped and leered at, you are in a no-win situation. You can go, but you risk being humiliated or even traumatized. But if you don't go, you are basically abandoning any hope of advancing your career. In many cases, this is why some men sexually harass. They aren't horny idiots who don't know any better, but are sexists who want to make sure that women are always second class citizens in their industry, by either wedging women out altogether or making sure the price of entrance for women always remains significantly higher than for men.

An anonymous writer for Forbes explained how this barrier to entry is really high when it comes to trying to raise money for start-ups. If you're male, to earn venture capital, you need to talk investors into believing in your start-up. For many women, however, you have to do that and also you have to put up with sexual harassment, as well. She started to pretend to be married in an attempt to fend off the sexual demands of men who wish to exploit a start-up manager's need for money. In response, one message board started to ask for names of venture capitalists who try to use your money needs to get sex. I don't personally approve of that kind of response, both because of the problem of anonymous accusations and because it perpetuates the problem of putting the responsibility on women to avoid harassment rather than on men not to harass, but that is no excuse for what happened next.

And what happened next is baffling. Some pompous asshole jumped into the thread to lecture women---his advice, as you'll see, amounts to giving up and accepting second class status---and Alyson Shontell of Business Insider, in a bizarre move I don't get at all, endorsed the "give up" advice like it was some kind of genius. 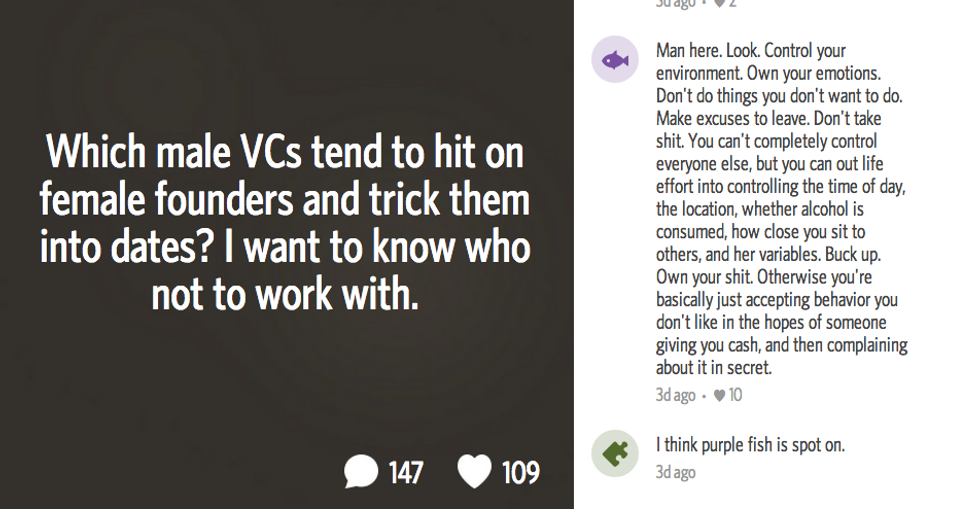 This bit of pompous assholery really needs to be broken down to fully understand how society has done this man wrong by allowing him to persist in his erroneous levels of self-regard.

OMG an actual MAN is talking, ladies! You are so #blessed to be the recipient of his mighty wisdom, which is godlike and amazing because, you know, a man.

Wave your magic wand and make that asshole stop harassing you.

Indeed. I would say that admitting that you don't want to have some guy groping you is owning your emotions.

Don't do things you don't want to do. Make excuses to leave. Don't take shit. You can't completely control everyone else, but you can out life effort into controlling the time of day, the location, whether alcohol is consumed, how close you sit to others, and her variables.

Buck up. Own your shit.

A man reaching out and grabbing you is "your shit". Because you did it. We're back to the idea that women secretly control men's choices through magic.

Otherwise you're basically just accepting behavior you don't like in the hopes of someone giving you cash, and then complaining about it in secret.

Indeed, the problem is that the investors are telling them that if they want cash, they must endure harassment. That bullshit choice is why women are so upset. I don't know how parroting back what women say, but in contemptuous terms, somehow makes you the great giver of wisdom.

In all seriousness, taking his comment together, he's basically saying that women's reaction to sexual harassment should be to give up and just let men have all the money. In other words, to let sexual harassment work as intended. The irony here is that his advice to women to simply give up hope with certain investors is what the thread he's complaining about was trying to do! This thread was about women sharing the names of certain harassers so that you could just avoid asking them for meetings and money.

So we have a man telling women that they should react to sexual harassment by first allowing it to work its magic and letting a certain percentage of venture capital basically be marked as male-only. But he doesn't think they should be efficient at this task by making a "don't bother" list, but instead should all have to learn individually what money is marked male-only by having to put up with the harassment first before giving up and realizing that you'll never be allowed to compete with men. The advice is to give up, blame yourself, and be quiet about it.

This advice is not advice. This is an attempt to bully women into accepting the status quo and shaming them for even thinking that it's unfair that women have to put their bodies on the line when they ask for money but men don't. If you think it's awesome to perpetuate a system where women are kept out of leadership roles forevermore, then I can see why you like this comment. But it's not advice, not by any stretch of the imagination.