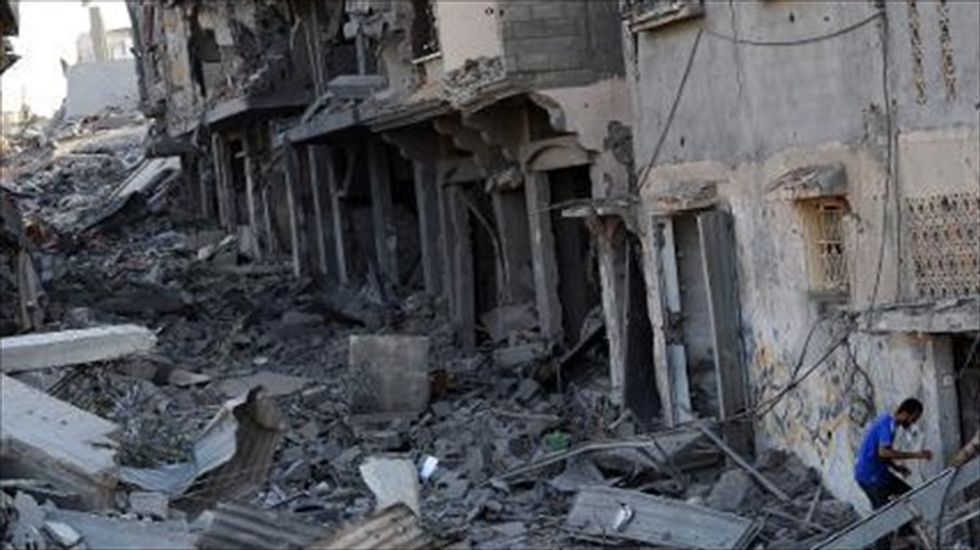 Gaza City (Palestinian Territories) (AFP) - Fears rose that the Gaza conflict could resume Friday as a temporary ceasefire entered its final stretch and Palestinians accused Israel of stalling at truce talks in Cairo.

Israel has said it is ready to "indefinitely" extend the 72-hour lull, due to expire at 0500 GMT on Friday.

Hamas has so far hedged its bets, with an official on the negotiating team saying a decision would be taken later.

But as night fell, a senior Palestinian official accused Israel of procrastinating, warning it could lead to as resumption of the fighting when the deadline runs out.

"The Israeli delegation is proposing extending the ceasefire while refusing a number of the Palestinian demands," he said, without elaborating.

"If Israel continues its procrastination, we will not extend the ceasefire."

A spokesman for Hamas's armed wing, the Ezzedine al-Qassam Brigades, warned just hours before the truce expired that fighting would resume if their demands were not met, first and foremost to open a sea port to the blockaded Palestinian enclave.

"If there is an agreement, it will be possible to extend the truce, but if there is not, we will ask the delegation to withdraw from the talks," a spokesman using the nom-de-guerre Abu Obeida said in a televised address.

In Gaza, residents resigned themselves that the truce could be in jeopardy. Many are still sheltering in schools, reluctant to return to their damaged homes without a lasting truce.

"Everything is possible, everything is ready, if there are no demands (met at the talks), there will be more destruction," said Najib Habib, 35, a labourer from Shejaiya, one of the worst-hit areas.

Four weeks of bloodshed between Israel and Hamas killed 1,890 Palestinians, and 67 people on the Israeli side, almost all soldiers.

A former spokesman for Hamas -- the son of one of the group's founders -- was found dead Thursday in a neighbourhood of the city that was heavily bombed by Israel, the movement said.

Ayman Taha was killed when Israeli forces "targeted him in the apartment where he was with several others in Gaza City" in the Shejaiya neighbourhood, the group said in a statement.

UN figures indicate that 73 percent of the Palestinian victims -- or 1,354 people -- were civilians. Of that number, at least 429 were children.

Hamas and Palestine Liberation Organisation (PLO) officials have laid out a number of demands, starting with the lifting of Israel's eight-year blockade on Gaza.

They also want the release of around 125 key prisoners held in Israeli jails.

In Gaza, Hamas spokesman Fawzi Barhum said there was no official stance on either renewing the truce or resuming the fighting, but an anonymous official familiar with the talks was pessimistic.

"The factions currently think they will resume fighting tomorrow morning," he told AFP on Thursday.

"Right now there is uncertainty; on the one hand the public in Gaza and in the region and the international community is telling (Hamas) not to... leave negotiations," a senior Israeli military official said.

"On the other, the military wing of Hamas is warning they could restart the rocket launches."

Despite the withdrawal of all its troops from Gaza by the time the three-day truce began early on Tuesday, Israel has retained forces along the border who are ready to respond to any resumption of fighting.

Netanyahu's handling of the conflict is getting broad support from the Israeli public, Israeli newspaper Haaretz said on Friday.

It cited a poll it conducted before the ceasefire that showed 77 percent of respondents thought his handling of events was "excellent or good" and pointed out that since then there were no public marches or rallies against the decision to withdraw troops without a decisive victory.

Speaking in Jerusalem after a visit to Gaza, International Committee of the Red Cross president Peter Maurer said he was "deeply distressed and shocked" at the impact of violence, saying the scale of the civilian losses must not happen again.

And he suggested there may have been violations of international humanitarian law.

In some areas, there are scenes of utter devastation, with certain districts reduced to a sea of rubble and shattered hulks of buildings, an AFP correspondent said.

U.S. President Barack Obama upped the pressure on the talks by saying Gaza could not remain forever cut off by Israel's blockade which has been in place since 2006.

"Long-term, there has to be a recognition that Gaza cannot sustain itself permanently closed off from the world," he said, adding the Palestinians needed to see "some prospects for an opening of Gaza so that they do not feel walled off".

And London, Paris and Berlin submitted an initiative offering an outline for rebuilding Gaza while ensuring Israel's security concerns are properly addressed, a diplomatic source said.

The proposal aims to strengthen the hand of Palestinian president Mahmud Abbas and his Palestinian Authority while clamping down on Gaza-based militant groups.

It also envisages opening the Rafah border crossing with Egypt, then eventually opening other crossings to Israel. It also refers to the opening of a commercial port in Gaza, the source said.