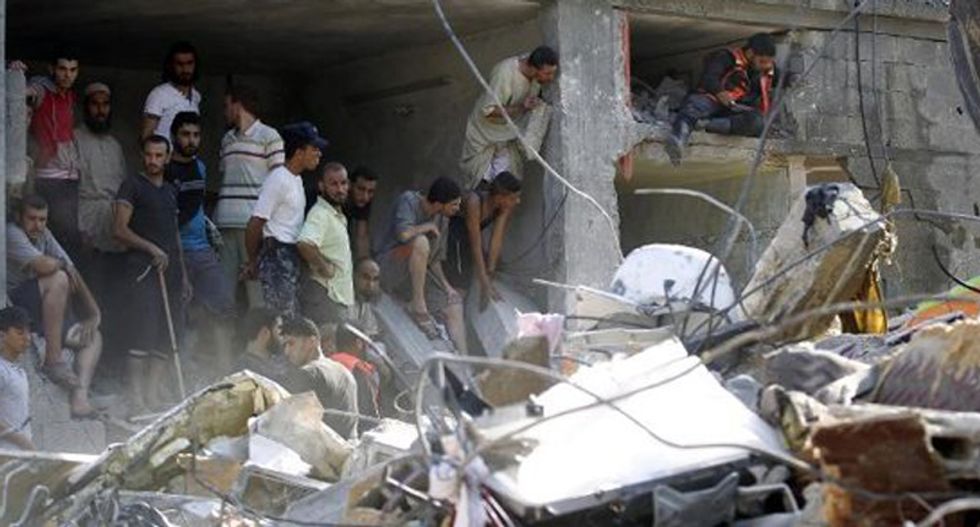 Palestinians gather around the rubble of a building destroyed following an Israeli military strike in Rafah, southern Gaza on August 21, 2014

Three senior Hamas commanders and four children were among at least 15 Palestinians killed in Gaza Thursday as Israel stepped up air strikes on day 45 of the bloody conflict.

The leaders in the Ezzedine al-Qassam Brigades were among at least seven people killed when Israeli missiles totally destroyed a four-storey home in the southern city of Rafah before dawn, emergency services spokesman Ashraf al-Qudra said.

The Brigades, the military wing of Hamas which holds de facto power in Gaza, identified the three as Mohammed Abu Shamala, Raed al-Atar and Mohammed Barhum.

The deadly raid came 36 hours after the wife and infant son of the Brigades' top military leader, Mohammed Deif, were killed in an Israeli strike on Gaza City late Tuesday.

Shortly afterwards, another person was killed in a raid on Nusseirat refugee camp in central Gaza.

During the morning, two strikes targeted groups of people in the street in the northern town of Beit Lahiya and in Gaza City, killing another seven Palestinians, four of them children, Qudra said.

The strike in Beit Lahiya killed a man and a 13-year-old boy, while five people, including three children died in Gaza City, he said, without giving their ages.

As well as the 15 killed in air strikes, another person in Nusseirat camp died of injuries sustained earlier in the conflict, Qudra said.

The latest deaths bring to 2,065 the number of Palestinians who have been killed during six weeks of fighting between Israel and Hamas.

The UN says around three-quarters of the victims in Gaza are civilians. Sixty-seven people have died on the Israeli side.