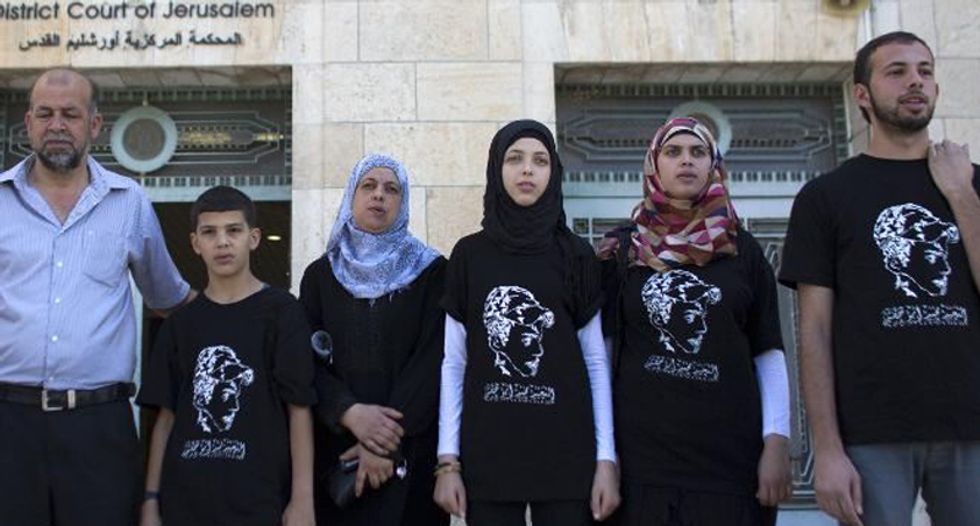 The family of 16-year old Mohammed Abu Khder, who was kidnapped from east Jerusalem on July 2 and burned to death, stand outside the District Court in Jerusalem, on August 6, 2014

The United States on Wednesday charged Israel had targeted members of a Palestinian family whose teenaged son was kidnapped and killed in July along with two cousins, who are US citizens.

Tensions between Palestinians and Israelis in annexed east Jerusalem plunged to a new low on July 2 when 16-year-old Mohammed Abu Khder was snatched from an east Jerusalem street and later found burned alive.

The death of the Palestinian teen -- thought likely in retaliation for the abduction and killing of three Israeli Students in late June -- sparked rioting and helped unleash the conflict under way in Gaza between Israel and Hamas.

Three days after his death, on July 5, the United States slammed Israel's arrest of a 15-year-old cousin, Tarek Abu Khder, 15, a US citizen. He was beaten in detention and has since been freed and returned to Florida.

On July 28, another cousin of Abu Khder, also American, was arrested in Israel as well, the State Department said Wednesday.

Deputy Spokeswoman Marie Harf identified him as "Mohammed Abou Khdeir," which would mean his name is the same as his murdered cousin's.

"We can confirm that Mohammed Abu Khdeir, a US citizen, was arrested on July 28. The US consulate general in Jerusalem is providing consular assistance. A consular official visited him on August 14th. The consulate is also in contact with Mr. Khdeir's family and his lawyer," Harf said.

Yet "we are concerned that the US consulate general in Jerusalem was not notified of his arrest by the government of Israel.

And "we are also concerned about the fact that members of the Khdeir family appeared to be singled out for arrest by the Israeli authorities," Harf added.