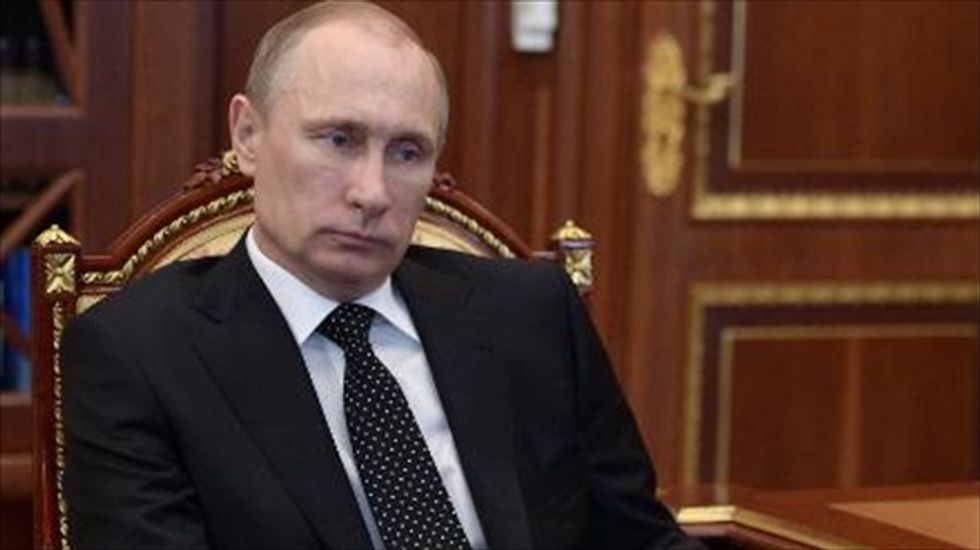 Russia's President Vladimir Putin attends a meeting in the Kremlin in Moscow, on April 23, 2014 [AFP]

Donetsk (Ukraine) (AFP) - Ukraine's president said he will "talk peace" with his Russian counterpart Vladimir Putin by demanding the withdrawal of pro-Kremlin militants from the war-torn east when they meet next week for the first time in months.

President Petro Poroshenko said on Thursday that "the whole world is tired of war" and that he would "call for militants to be pulled out of Ukraine" when he meets Putin for crunch talks in Minsk alongside top EU officials.

His strident tone reflects the fact that government forces have made significant gains against the pro-Russian rebels in recent days. A fierce offensive continued on Thursday, with Kiev hoping for a knock-out blow ahead of the fresh round of diplomacy.

Meanwhile, a controversial Russian aid convoy inched closer to the border with rebel-held areas. Ukraine's customs officials said they had started processing the first of the lorries after a week of wrangling caused by fears that the convoy could be used to smuggle in military supplies to the rebels.

Kiev has accused Moscow of ramping up support to the rebels as their situation grows more desperate, and the West fears the Kremlin could even launch a full-scale invasion as a last roll of the dice.

Russia has persistently denied allegations that it is arming and effectively running the rebellion. It says it wants an end to the Ukrainian offensive and to four months of fighting that has killed over 2,200 people.

It ridiculed claims from Kiev that Russian military documents had been found in armoured vehicles captured following a battle near the rebel stronghold of Lugansk.

On the ground, fighting continued in a string of key rebel towns as government forces refocused attempts to cut off alleged supply routes from Russia.

Shelling near the main separatist city of Donetsk left two civilians dead on Thursday, while an interior ministry official said 16 servicemen were killed in fierce battles for control of a railway hub in the region.

The United Nations on Wednesday increased its estimate of the number of people who have fled the fighting since April to at least 415,800.

In Lugansk, a city without communication, water or power for the past 19 days, authorities said residents were "on the brink of survival".

The International Committee of the Red Cross (ICRC) urged both sides to "take constant care to spare the civilian population" after a small team of aid workers visited the city.

Meanwhile the week-long dispute over a mammoth Russian aid convoy parked at Ukraine's border appeared to be nearing resolution.

Kiev and the West fear that an attack on the convoy in Ukraine could be used by Russia as a pretext to invade, which Moscow has denied.

The Red Cross has spent the past few days scrambling to nail down security guarantees from all sides for the convoy's journey.

A day after the national currency tanked to a new record low, Economy Minister Pavlo Sheremeta announced his resignation citing prolonged disputes over how to fix the country's disastrous financial situation.

Sheremeta has been at loggerheads with Prime Minister Arseniy Yatsenyuk, who criticised the slow pace of reforms needed to unlock $1.4 billion (one billion euros) in international aid due later this month.

The money is part of a broader $27-billion rescue package to salvage the economy but questions remain over failures by the authorities in Kiev to push through key anti-corruption legislation.