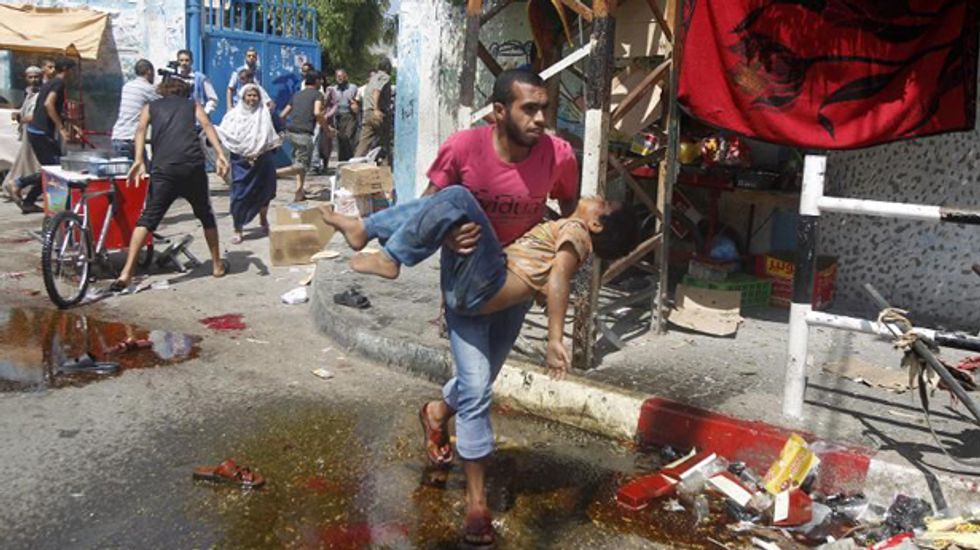 The UN expressed outrage after another deadly strike on one of its schools Sunday as Israel began pulling some troops back from Gaza in a step towards unilateral withdrawal.

The strike killed 10 people at a school in the southern city of Rafah where around 3,000 Palestinians made homeless by the violence had been sheltering, in the third such incident in 10 days.

Washington said it was "appalled" and called for a "full and prompt" investigation.

"Israel must do more to meet its own standards and avoid civilian casualties," US State Department spokeswoman Jen Psaki said.

Israel's military, hours after the attack, confirmed it had targeted three Islamic Jihad militants on a motorbike "in vicinity of an UNRWA school in Rafah. The IDF is reviewing the consequences of this strike."

"This madness must stop," he said.

The strike came as Palestinian factions gathered for truce talks with Egypt in Cairo and world powers voiced increasingly urgent calls for both sides to cease fire.

"The bloodshed needs to stop," said a statement signed by the European Union and the European Commission presidents on behalf of the bloc's 28 members.

"We deplore the terrible loss of lives, including innocent women and children," it said, condemning the "intolerable violence" in Gaza as Israel presses its assault aimed at halting Hamas rocket fire.

And in Cairo, China's top diplomat Wang Yi demanded both sides in the conflict which erupted on July 8 "immediately" halt their fire.

But there was little respite on the ground, where more than 71 people were killed in Rafah alone as more bloodshed sent the death toll soaring over 1,800.

At the school, an AFP correspondent witnessed scenes of chaos, as adults sprinted frantically away through pools of blood, young children clutched in their arms.

With hospitals and clinics under increasing pressure, Gaza's medical services have reached the brink of collapse, the UN warned.

Rafah's main Najjar hospital is closed after being hit and only two clinics were functioning, with medics rapidly running out of space.

In one, an AFP correspondent saw the bodies of four small children packed into an ice cream freezer.

Intensive international attempts to broker a diplomatic end to the fighting have so far proved fruitless, but efforts are continuing with a Palestinian delegation in Cairo for talks with US and Egyptian officials.

Israel's security cabinet decided not to send a representative.

The Palestinians, who met Sunday to hammer out a common position, want "a ceasefire; Israeli troop withdrawal from Gaza; the end of the siege of Gaza and opening its border crossings," said Maher al-Taher, a member of the delegation.

Israeli Prime Minister Benjamin Netanyahu said late on Saturday: "We will take as much time as necessary, and will exert as much force as needed.

"I don't plan on saying when we'll finish, we have no obligations apart from our security interests," he said in a speech seen as being the harbinger of a unilateral Israeli withdrawal.

"Israel has taken the initiative into its hands," wrote Sima Kadmon in the top-selling Yediot Aharonot.

"It will decide when and how to act, with what degree of force and against which targets... in other words: unilateral withdrawal of the IDF and a return to the same simple formula of 'quiet will be met with quiet'," she wrote.

Earlier Sunday, the army confirmed it had begun withdrawing some troops from Gaza.

"We are removing some (forces)," Lieutenant Colonel Peter Lerner told AFP, saying troops were "extremely close" to completing a mission to destroy a network of attack tunnels.

"We are redeploying within the Gaza Strip, taking out other positions," he said, indicating the military was "changing gear".

Witnesses had on Saturday reported seeing troops leave Beit Lahiya and Al-Atatra in the north as well as from villages east of Khan Yunis in the south.

On Sunday, AFP correspondents reported around 100 tanks gathering in the border area outside Gaza where they had not been before, having just pulled out, while others were seen driving away from the border.

Meanwhile, Israel said that a soldier believed snatched by militants in Gaza on August 1 was dead.

Analysis of remains found in a tunnel near Rafah showed that they contained the DNA of 23-year-old Lieutenant Hadar Goldin, the army said.

His suspected kidnapping had triggered a brutal Israeli assault on Rafah and the surrounding area which medics said killed more than 200 people in just 26 hours.

Hamas's armed wing the Ezzedine al-Qassam Brigades acknowledged its militants had staged an ambush in which two other Israeli soldiers were killed, but denied holding Goldin.