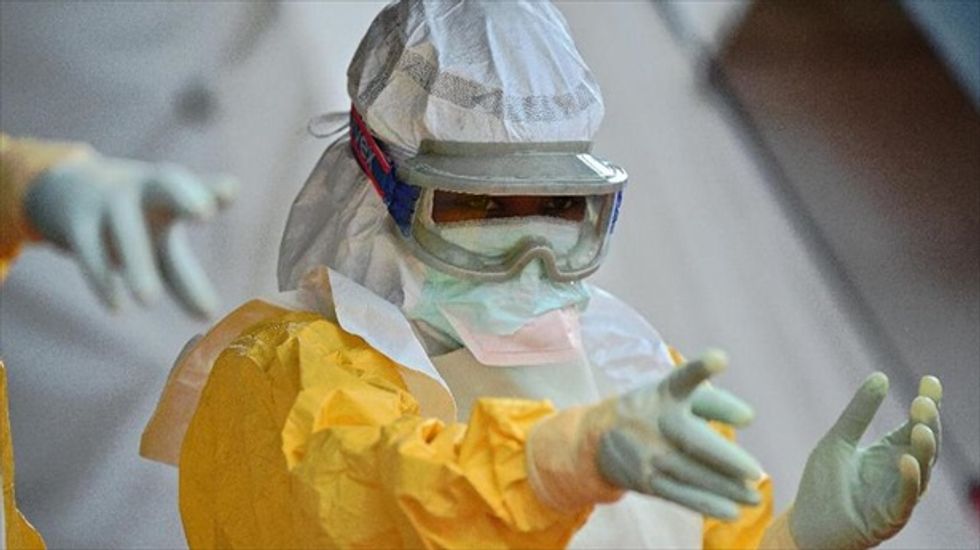 Freetown (AFP) - The UN's Ebola envoy said Monday the fight against the epidemic was a "war" which could take six more months, as its global health body claimed the disease was affecting an "unprecedented" number of medical staff.

David Nabarro, a British physician the United Nations appointed to coordinate the global response to the crisis, was in Sierra Leone's capital Freetown for the fifth day of a tour of the region.

"The effort to defeat Ebola is not a battle but a war which requires everybody working together, hard and effectively," he told a news conference.

"I hope it will be done in six months but we have to do it until it is completed."

UN officials have pledged to step up efforts against the lethal tropical virus, which has infected more than 2,600 and killed 1,427 since the start of the year.

The World Health Organization in fresh figures on Monday said more than 120 health workers across west Africa have died during the "unprecedented" outbreak, and more than 240 had been infected.

"The outbreak of Ebola virus disease in west Africa is unprecedented in many ways, including the high proportion of doctors, nurses, and other health care workers who have been infected," said the WHO statement.

"To date, more than 240 health care workers have developed the disease in Guinea, Liberia, Nigeria, and Sierra Leone, and more than 120 have died."

It added that "Ebola has taken the lives of prominent doctors in Sierra Leone and Liberia", depriving those countries of badly needed experienced medical care.

Adding to the crisis, the Democratic Republic of Congo on Sunday confirmed its two first cases of Ebola this year, claiming they were unrelated to the epidemic in west Africa.

And in Liberia, the death of a doctor treated with an experimental serum cast doubt on hopes that new drugs could help to contain the worst-ever outbreak of the deadly disease.

Nabarro, who has been charged with revitalising the health sectors of Ebola-hit Liberia, Guinea, Sierra Leone and Nigeria, said bans on flights to afflicted countries were hampering UN efforts to stop the epidemic.

Almost all airlines running services to and from the three hardest-hit nations' capitals have announced a temporary suspension until the spread of the disease is brought under control.

"By isolating the country, it makes it difficult for the UN to do its work," said Nabarro.

"Pilots and others, as well as passengers, generally have very low risk of Ebola infection," Keiji Fukuda, the WHO's Assistant Director-General on Health Security, told the news conference.

Liberia has suffered most since the outbreak of the deadly virus erupted earlier this year, with 624 deaths.

Guinea, where the disease was first discovered, has reported 406 deaths, Sierra Leone 392 and Nigeria five, the World Health Organization (WHO) said on Friday.

The news conference followed an announcement by Liberia that a doctor treated with experimental American anti-Ebola serum ZMapp had died.

Japan had said earlier that it was ready to offer an experimental drug developed by a Japanese company to help stem the global tide of Ebola.

The WHO has been discussing the use of unapproved drugs as a way of containing the outbreak.

"Given the overall situation, it is reasonable to go ahead and use these medicines but in a very controlled and very careful way," Fukuda said.

"We also don't want to be in a situation where something potentially life-saving cannot be used," he added.

The clamour for untested drugs is expected to intensify after DR Congo on Sunday confirmed two of eight samples taken from victims of a mystery fever had tested positive for Ebola.

The confirmation marks the seventh outbreak of Ebola in DR Congo, where the virus was first identified in 1976, near the a river after which it is named.

Meanwhile Britain's first Ebola patient, a male nurse who contracted the disease in Sierra Leone, was admitted to the country's only specialist Ebola isolation unit in London at the weekend.

The patient, named in British media as 29-year-old William Pooley, is not "seriously unwell" according to the Department of Health.

The WHO has echoed Nabarro's warning that it could take several months to bring the epidemic under control.

The agency estimates its count of the infected and dead is likely far too low, due in part to community resistance to outside medical staff and a lack of access to infected areas.