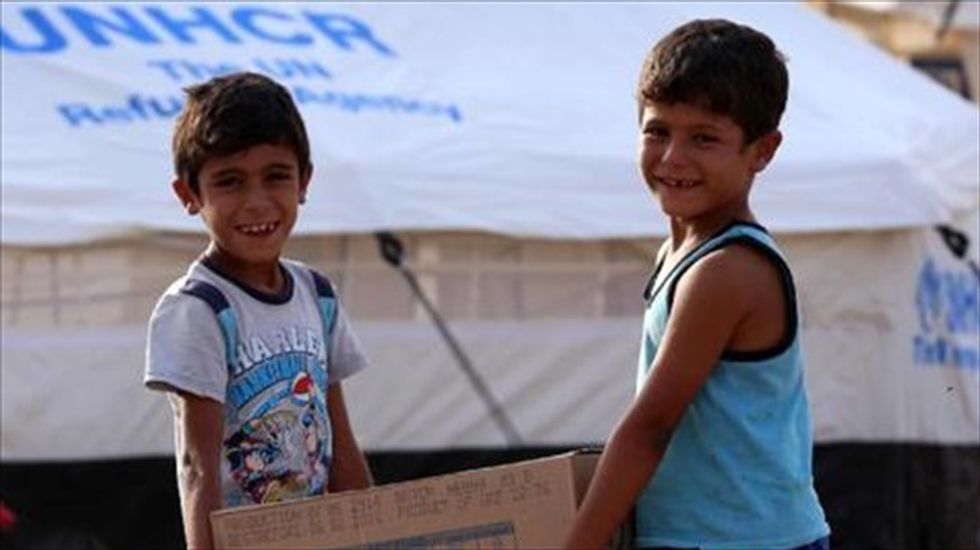 Young Iraqis who fled violence carry a parcel of food at the Bahrka camp on Aug. 20, 2014 [AFP]

Geneva (AFP) - The UN food aid agency said Wednesday that a convoy of supplies had reached 2,000 desperate families, crammed into the Iraqi city of Karbala after fleeing jihadist attacks.

It said the delivery brings to 700,000 the total number of Iraqis receiving World Food Programme assistance since June, when Sunni jihadists who already held part of Syria swept across swathes of Iraq.

The WFP trucks travelled to the southern city from Arbil in Iraq's northern Kurdistan region, whose fighters have battled to hold off the jihadists.

The convoy used a corridor along the Iranian border, considered relatively safe compared with high risk routes deeper inside Iraq.

More trucks were set to depart daily until all 15,000 families registered as having fled to Karbala have received assistance, WFP said.

Karbala is a holy city for Shiite Muslims, who have fled in their thousands after being targeted by the Sunni jihadists from the feared Islamic State militia.

The United Nations estimated that 1.2 million Iraqis have been displaced by violence so far this year in 2014.

Of those, 700,000 have fled since the June offensive began in the north, including Shiites and members of Iraqi religious minority groups such as Christians and Yazidi.

Another 500,000 had already fled fighting in the western Anbar region which erupted in January.

Before the latest wave of displacement, WFP was already assisting about 240,000 people displaced from Anbar, as well as more than 180,000 refugees from the conflict in Syria who are sheltering in Iraq.

Many of the displaced lack access to food, water or other basics, and are living in unfinished buildings, mosques, churches, parks and schools.

"Our team met an Iraqi woman who arrived in Karbala from Mosul in July with her five children and three grandchildren. She said that until she got her food parcels from WFP this week, she had been living hand-to-mouth through random meal donations from citizens," said Jane Pearce, WFP's country director for Iraq.