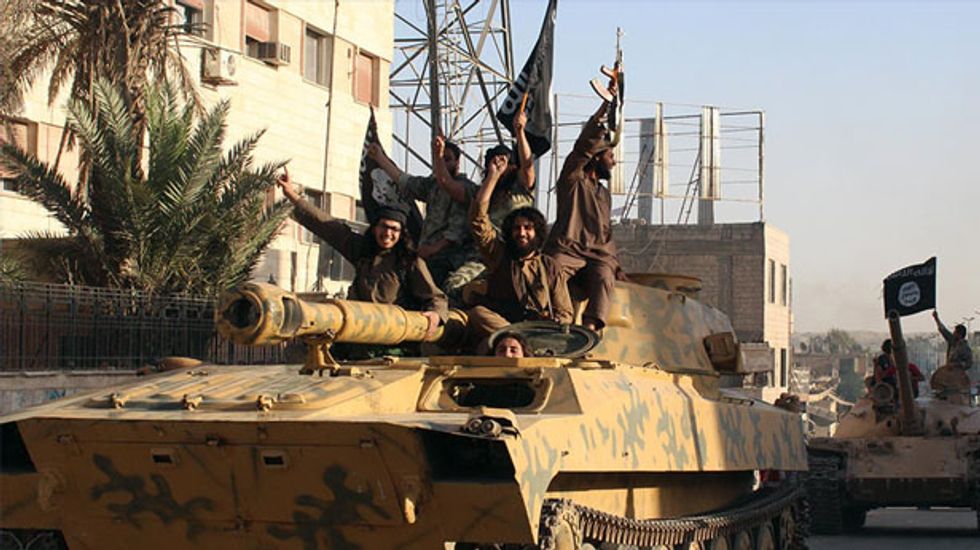 The Obama administration is considering aerial strikes and humanitarian air drops to help besieged religious minorities chased up a mountain by militants in Iraq.

The move comes as Iraq's largest Christian city was all but abandoned as the jihadist group Islamic State (Isis) advances through minority communities in the country's north-west and towards the Kurdish stronghold of Erbil.

The US military is already helping the Iraqi government coordinate air drops of vital supplies to at least 40,000 Iraqis, mostly from the Yazidi minority, trapped on top of Mount Sinjar in the north after death threats from the Islamists who have overrun much of Sunni and northern Iraq.

Internally, the Obama administration was said to be studying what additional steps it could take directly, to include direct US air drops to those Iraqis stranded on the mountain.

"We have been working urgently and directly with officials in Baghdad and Erbil to coordinate Iraqi airdrops to people in need," a US defense official said on condition of anonymity.

The official said the US was in constant coordination with the Iraqi government on "how we can help coordinate additional relief, enhance their efforts, and provide direct assistance wherever possible."

If the US opts to intervene directly, it would represent the first aerial mission over Iraq since 2011 for a purpose beyond conducting surveillance on Isis, providing long-scheduled military sales, or transporting the extra hundreds of US special-operations "advisers" that Barack Obama ordered into Iraq to help Baghdad confront the threat from Isis.

UN officials say an estimated 200,000 new refugees are seeking sanctuary in the Kurdish north from Islamic extremists who have pursued them since the weekend. The city of Qaraqosh, south-east of Mosul, home to around 50,000 Christians was the latest to fall, with most residents fleeing before dawn on Thursday as convoys of extremists drew near.

Other Christian towns near Mosul, including Tel Askof, Tel Keif and Qaramless have also largely been emptied. Those who remained behind have reportedly been given the same stark choice given to other minorities, including Yazidis: flee, convert to Islam, or be killed.

Christians, Yazidis and Turkmen have been at the frontlines of Iraq's war with Isis ever since the jihadist group stormed into Mosul and Tikrit and mid-June. The Iraqi army capitulated within hours, with at least 60,000 officers and soldiers fleeing on the first day of the assault alone.

Ever since, the jihadists have continued to make advances, while Iraqi troops have concentrated on defending Baghdad and the Shia south, leaving the defence of minorities in the north to the Kurdish peshmurga.

However, even the much vaunted Kurdish forces were no match for the heavy weapons wielded by the jihadists as they advanced in recent days. Peshmurga officers ordered troops to withdraw to areas administered by the Kurdish regional government – a clear sign of priorities and of where the battle lines are being drawn.

Without any protection, Yazidis, Christians and Turkmen are being uprooted from communities they have lived in for millennia and the geo-social fabric of Iraq is being rapidly shredded.

While those who have managed to flee the Christian areas have so far had a relatively safe passage to Erbil, the tens of thousands of Yazidis remain besieged near Sinjar, with little food or water.

The UN said it was able to get some supplies overland to the stranded hordes – avoiding Isis fighters who have surrounded most of Mount Sinjar. Turkish foreign minister Ahmet Davutoglu announced that Turkish helicopters had dropped food and water on the mountain top. Iraqi helicopters have also made food drops, but stranded Yazidis say they do not have enough to survive.

The Chaldean archbishop of Kirkuk, Joseph Thomas, described the situation in northern Iraq as "catastrophic, a crisis beyond imagination". He demanded urgent intervention to save what remained of the area's Christian heritage.

Kurdish officials on Thursday demanded more help in catering for refugees. The Kurdish administered areas have seen staggering numbers cross their notional border since the original Isis onslaught two months ago. In the first week alone, some 500,000 people are thought to have fled towards Erbil.

The capital of the Kurdish north is already home to a new Chaldean Christian community, which fled Baghdad in the wake of an Isis-led massacre inside a cathedral in October 2010. Many fleeing Christians have headed for the Ainkawa neighbourhood, which is home to Baghdad's Christian exiles.

The past 11 years of war and insurrection since the US invasion have led to most of Iraq's Christians fleeing. Numbers have plummeted starkly from an estimated one million before 2003 to around 150,000 now. A large number of those who remain are now displaced.

Miriam Dagher, 53, from Qaraqosh, said churches in the city had already been torched and religious insignia smashed. "We stayed as long as we could," she said. "But nothing could save us. This is the end of our community."

Isis has threatened to redraw the unitary borders that were carved out of the ruins of the Ottoman empire. The group's rampant insurgency and the inability of state actors to stop it has rendered the frontier between Iraq and Syria evermore irrelevant.

Iraq's beleaguered prime minister, Nour al-Maliki, no longer has the authority to unite the country's disparate sects. Maliki, a Shia Muslim, had disenfranchised much of the country's Sunni community over the past three years, some of whom have turned to Isis as a means of reasserting themselves.

After digging in for the past two months, Maliki now faces a desperate battle to form a government, with his key backer Iran understood to have told him that it no longer supports his bid to lead the country for a third term.

Kurdish leader, Massoud Barazani, has said he is moving towards holding a referendum that could pave the way for an independence bid, a move that could spell the end of Iraq, and unsettle surrounding countries, including Syria, Turkey and Iran.