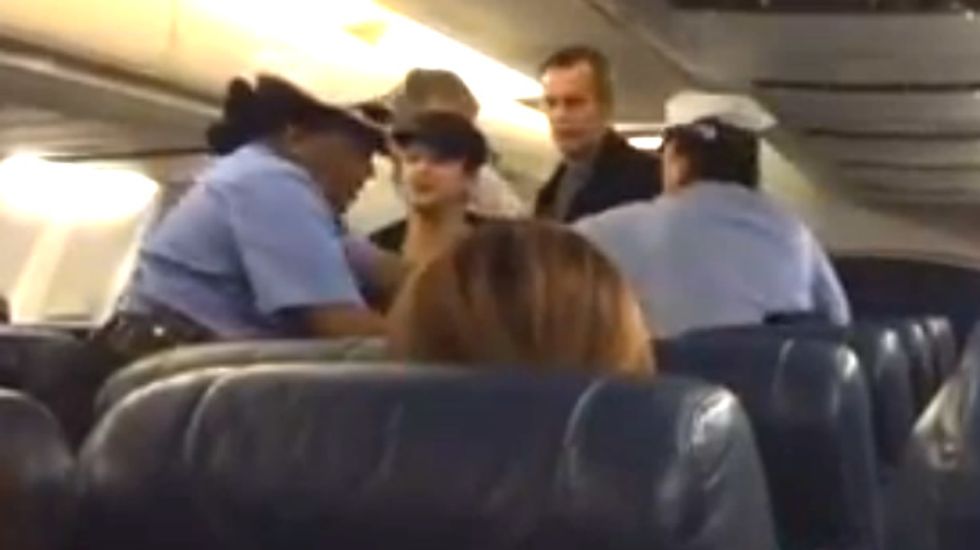 A woman being forcibly removed from a flight to Portugal accused the airline personnel and airport security of being racist and bigoted, according to a video posted on Reddit by user mikeirvingmedia yesterday.

The Reddit user said that the woman entered the cabin already irate, as she had just learned that the flight was bound for Portugal instead of Brazil. "She continued being loud and obnoxious and I'm assuming that some of the families with younger children told the flight attendants, who then called the police," the Reddit user wrote, "When the police came, she refused to move, started screaming at them and telling them she would sue, and when they told her she would be arrested if she didn't cooperate that just egged her on more."

"This is harassment! I didn't do anything wrong! I'm going to sue the shit out of you!" the unidentified woman can be heard screaming on the tape.

"I said, 'Calm down and put your hands behind you,'" one of the officers arriving on the scene said.

As she is being escorted out of the cabin, she again insisted she "did nothing wrong."

Kent Parson, who was on the flight, told The Portugal News “she was yelling on the plane, swearing a bunch. People didn’t want on her on and when police tried to escort her off the plane, she started yelling at them and went crazy.”

The woman's identity is not known, but the plane -- a US Airways flight departing from Philadelphia for Lisbon, Portugal -- took off more than an hour after it had been scheduled to leave.

Watch video of the incident via mikeirvingmedia below.