'We are hurting': After unrest, Ferguson businesses hope for a return to normalcy 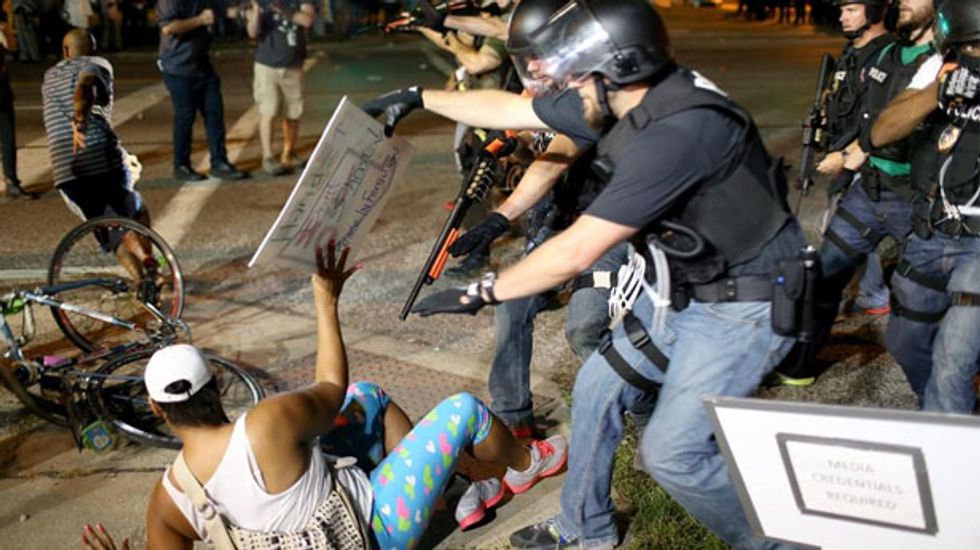 Police officers arrest a demonstrator on August 18, 2014 in Ferguson (AFP)

The Swiish Bar and Grill that she owns in the St. Louis suburb of Ferguson was forced to shut for 17 days after the police shooting of an unarmed black teen on Aug. 9 sparked violent clashes between police and protesters and led law enforcement to close the area in front of her building.

"We have not earned one cent" since the shooting, Clark told the 10-member council on Tuesday in an emotional plea for compensation from the city. "We are hurting and it's unfair."

Clark's concerns are echoed by small independent business owners along the half-mile (0.8-km) stretch of West Florissant Avenue, the four-lane street that became the epicenter of protests after 18-year-old Michael Brown was shot by Darren Wilson, a white police officer. The ensuing violence, which included looting of local stores, exposed the racial tensions in this depressed neighborhood and led to worldwide condemnation of heavy-handed police tactics.

While the protests have died down in recent days and many businesses are trying to return to normal, store owners whose properties were looted during the unrest or who have lost trade because of it fear they will not survive.

Theirs is just a slice of the turmoil that has upset this normally quiet, mostly black community. The past two weeks have opened the lid on a litany of issues besetting Ferguson and many other neighborhoods across the United States. Mistrust between police and the black community, a lack of racial diversity in the police force and among elected officials, and low-level voter registration have all emerged as problems that will take time to fix.

"We need to diversify the police department, we need to educate the voters, we need to show them the importance of voting," said St. Louis County Council chair Hazel Erby, who represents the county's first district, which includes Ferguson.

The council plans to introduce an emergency ordinance that would provide relief for affected businesses in Ferguson, it said at the Tuesday meeting. Another private fund of more than$100,000 has been set up by economic development body Reinvest North County and the Regional Business Council to support local schools and businesses.

Meanwhile on West Florissant, much has returned to normal. The marches have thinned out, the T-shirt sellers have gone and the police presence has diminished.

Left, however, are the boarded-up stores and their fretful owners. Many have insurance policies that do not cover the damage or the lost business. Others are not insured at all.

None of the people interviewed were aware of a telephone line that has been set up by the state for businesses to seek help for their damages.

"I feel scared about my business," said Rokhaya Biteye, 44, owner of Daba African Hair Braiding located in one of the modest strip malls that line West Florissant. Profits have evaporated to almost nothing since the shooting - in a normal week she generally makes about $800, but is now bringing in less than $100.

"I don't think it will work anymore," she said as she made fish tail braids in a customer's hair. She has no insurance.

Ikino Jones, 38, an independent hairdresser working at Clip Appeal barber a few doors down, stopped cutting a customer's hair and gestured around him: "Look at it, I'm empty. People are too scared to come down, maybe they've gone somewhere else."

City officials had visited Jones at the barber shop, he said, and recommended that he take out a small business loan, but he does not want to get into debt. "That doesn't make sense," he said.

The returning calm has brought with it a quiet desperation. On the boarded-up storefronts, owners spray painted "we are open". Others wrote "in God we trust" and "stop the violence." The hope now is that business picks up again, fast.

"It is a struggle just to stay ahead and pay the bills," said Antonio Henley, 43, owner of Prime Time Beauty and Barber Shop on West Florissant. He said he lost about 70 percent of his business over the last two weeks. He has insurance but the policy does not cover damage from rioting.