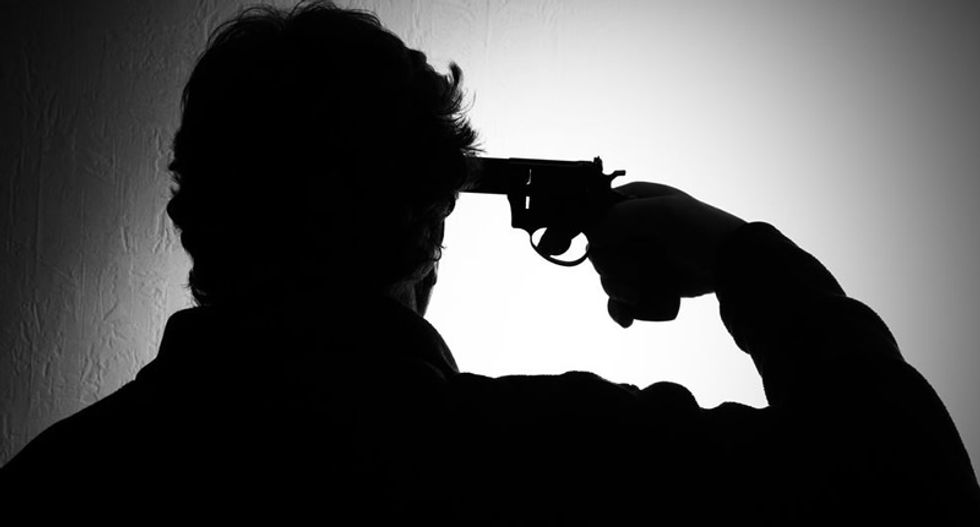 ["Suicide, a man put a gun to his head, black and white" on Shutterstock]

The winner of a game of Russian roulette was arrested on Monday on charges related to the death of the loser, The Hartford Courant reports.

According to police, John Dybowski and Armand Cyr were video-chatting with Kevin Hogg via Google on July 13, 2014.

"Dybowski was spinning the revolver's cylinder and trying to snap the gun closed with the flip of his wrist," Hogg told police. He then "observed that the revolver wasn't locking closed while Dybowski did that and that something fell out of it." Dybowski did "this a few times before the gun finally locked closed [then] immediately put the gun to the side of his head and pulled the trigger."

The gun clicked, but did not fire.

Hogg told police that he asked Dybowski and Cyr what they were doing, and repeatedly told them that they needed to stop doing it. As he was saying this, Cyr took the gun from Dybowski and "without either spinning its cylinder or otherwise manipulating the gun, put it [to the] right side of his head and pulled the trigger."

The gun fired, and Cyr slumped back into his seat.

Dybowski began "freaking out." After reviewing chat logs, police determined that the shooting occurred at 5:42 p.m., but Dybowski did not call 911 for another fourteen minutes.

Because of a previous felony conviction, Dybowski was not permitted to possess the handgun used in the shooting, and when emergency medical technicians arrived on the scene, they said they found both drugs and drug paraphernalia in the house.

Dybowski has been charged with criminal possession of a firearm, reckless endangerment, tampering with evidence, and possession of illegal narcotics. He is being held on $100,000 and will return to court on September 24, 2014.

["Suicide, a man put a gun to his head, black and white" on Shutterstock]