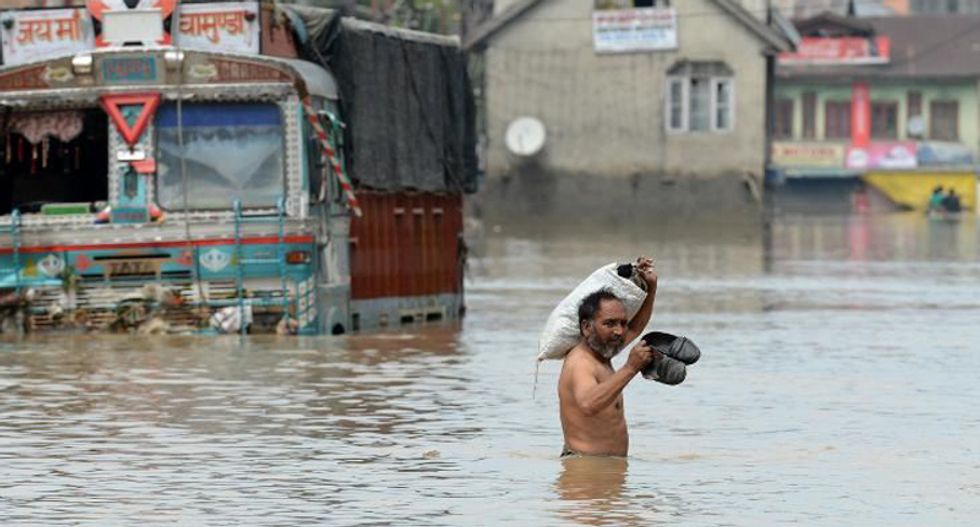 A Kashmiri resident carries belongings through floodwaters past an inundated truck in central Srinagar on September 12, 2014

The floods and landslides from days of heavy monsoon rains have now claimed at least 480 lives in Pakistan and India, with rescuers struggling to cope with the massive disaster.

"There's no milk for children and they're crying day and night. The authorities supply us with rice but children need bread and milk," one survivor, Fizza Mai, 45, who was at a Pakistani relief camp, told AFP.

Pregnant women were also suffering from an "acute shortage of water and medicines" along with "hygienic food", said relief camp gynaecologist Robina Akhtar.

In both countries, security forces were using boats and helicopters to deliver food supplies and evacuate survivors. People waved from rooftops and upper-storey windows to attract rescuers' attention.

In flood-hit areas, people waded through knee-deep water to escape with many carrying children and household belongings on their backs while others led livestock.

Two dykes on a flooded river were blown up to save the historic southern Pakistani city of Multan from the muddy, swirling floodwaters that have caused widespread crop damage.

Some 280 people have died from the heavy rains and flooding in the Punjab, Kashmir and Gilgit Baltistan regions, Ahmed Kamal, a spokesman for the National Disaster Management Authority (NDMA), told AFP, while over 214,000 people had been evacuated.

Pakistan, which has suffered a series of annual flood diasters, says as many as 2.29 million people have been affected by the flash floods.

In Indian Kashmir, as the brown waters subsided, emergency officials were able to reach more stranded people in Srinagar, the main city of Indian Kashmir, and surrounding areas afflicted by the worst flooding in a century.

"Rescue teams are now able to go inside houses and get out those still trapped inside and account for the dead bodies," Shantmanu, divisional commissioner of Jammu region, who uses one name, told AFP.

In some areas, television footage shows entire villages wiped out, their flimsy houses smashed by floodwaters that swept away their occupants. Strewn on the ground are household items like saucepans and cups and soggy clothing.

The Indian government estimates at least 200 people died and 130,000 people have been rescued in restive Indian Kashmir where militants have been fighting Indian rule since the late 1980s.

"More than 200,000 people are still stranded, but the exact number is hard to assess," Shantmanu said.

But health worries were mounting about water-borne diseases with local media reporting animal carcasses in the streets.

State chief minister Omar Abdullah, a target of mounting public anger over the government's slow response to the catastrophe, said houses would be rebuilt before "the immense cold" of winter strikes.

"There's no question of people living in tents in winter," he said in Srinagar, according to the Press Trust of India, adding 137 relief camps were operating in the Kashmir valley alone helping over 100,000 people.

Abdullah said disinfectants like chlorine were being used to avert water-borne diseases.

"Clean drinking water is a problem. I've asked authorities to use medicine liberally to reduce chances of disease," Abdullah said.

Health Minister Harsh Vardhan told India's NDTV now "we are bound to have water-borne diseases such as diarrhoea gastroenteritis" but "we're very alert to everything".

As the water-logged streets were being cleared, a "continuous flow" of visitors who had been stranded -- mainly from the rest of India -- headed for Srinagar airport, but there were not enough flights, Shantmanu said.

Abdullah has defended the long time it took for authorities to help some people stricken by the floods, saying no one could have anticipated the ferocity and magnitude of the disaster.