Baghdad propaganda series mocks belief that IS was created by CIA, Israel 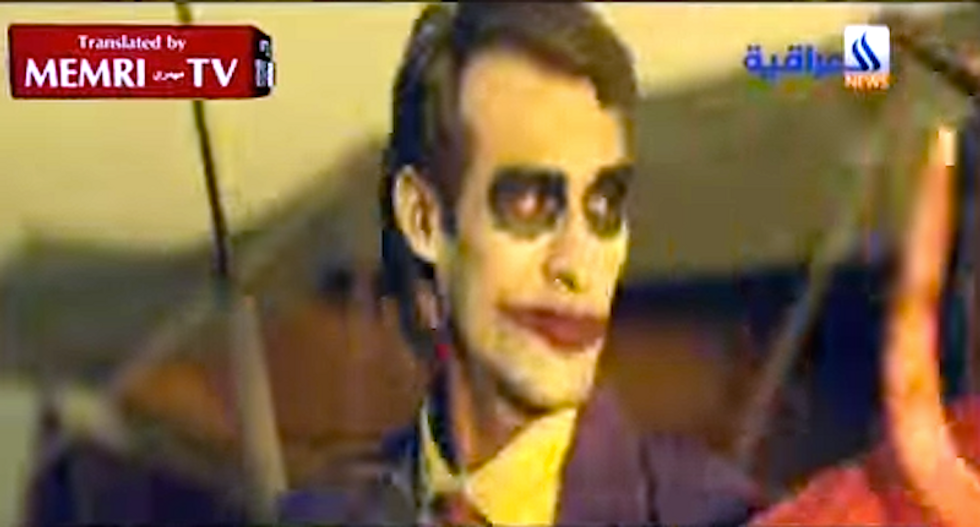 As Iraqi forces struggle to pin back the Islamic State group on the ground, Baghdad is taking its war against the jihadists to the airwaves with a television comedy series.

The usually elusive Abu Bakr al-Baghdadi features prominently in the show, whose promoters argue that ridiculing the jihadist supremo can help dent his aura of almost supernatural villainy.

The fear factor -- fed by online videos of mass executions, beheadings and abductions -- has been a key aspect of IS strategy, often handing it victory before the battle had even started.

The goal of the show is "to remove this phobia that has taken root in a lot of people's minds," chief supervisor Thaer Jiyad told AFP on the set between two scenes.

But if the show is Baghdad's new weapon in the war against IS, then its very first shots were a friendly fire blunder that sparked controversy even as the series premiered on Saturday.

The trailer that Iraqiya state TV had been showing several times a day for weeks plays on a belief widely held in Iraq that IS was created by the CIA, Israel and Gulf monarchies to sow chaos.

With the United States now leading an aerial bombing campaign which also involves several Gulf countries against IS in Iraq and Syria, the Iraqi Media Network production company had to order a last-minute reshoot.

The first version of the trailer, which is still widely available on the Internet, opens with a cartoon-like devil character brandishing a fork leading a column of jihadist fighters through the desert.

He is met with open arms by an ostensibly American character in full cowboy attire who leads him into a tent for an arranged marriage.

The bride is a Jewish princess -- a large star of David hangs around her neck to make that clear -- who is escorted to her nuptial nest by a woman whose sunglasses and bright green pantsuit are an unmistakeable reference to Qatar's first lady Sheikha Mozah.

She and the cowboy were dropped from the new version of the opening clip for the series, whose title loosely translates as "State of Superstition" and is a play on the Arabic word for caliphate.

The Joker of Batman fame, Dracula and a dwarf are among the random mix of characters in the background, all dancing to the series' catchy theme song, a parody of a known IS anthem.

The next scene shows the result of the union between the Jewish bride and the devil.

"The egg hatched, a little IS-ling emerged," the song goes.

The Baghdadi figure that grows out of the shell then leads a choir of officers from Saddam Hussein's ex-ruling Baath party into reciting his programme of blood-letting for Iraq with the refrain: "O beheader, where are you?"

In a "Pulp Fiction"-style slow-motion finale, the "caliph" ends up shooting all the Baathists one by one, a not-so-subtle Faustian warning that he who bargains with the devil chooses his own demise.

"Ultimately, with fundamentalist organisations, the only solution is to confront them, and that starts with the leaders," said Jiyad.

The show's first episode is lighter on satire and relates the day jihadists march into a model Iraqi town, with its candy-coloured buildings and honest denizens.

Despite the show's declared goal of encouraging Iraqis to overcome their fear, the thought of possible retribution for mocking the jihadists caused a collective bout of stage fright among the cast.

"We encountered many difficulties, notably when some of the artists were too afraid to take part in the shooting out of security concerns," director Ali al-Qassem said.

But those who stuck with the project feel they are participating in the war effort, he said.

"We all have a duty to defend this country. We are not good at using weapons but we can also help defeat IS through our work."

Watch a trailer for the show posted online by MEMRITVVideos: