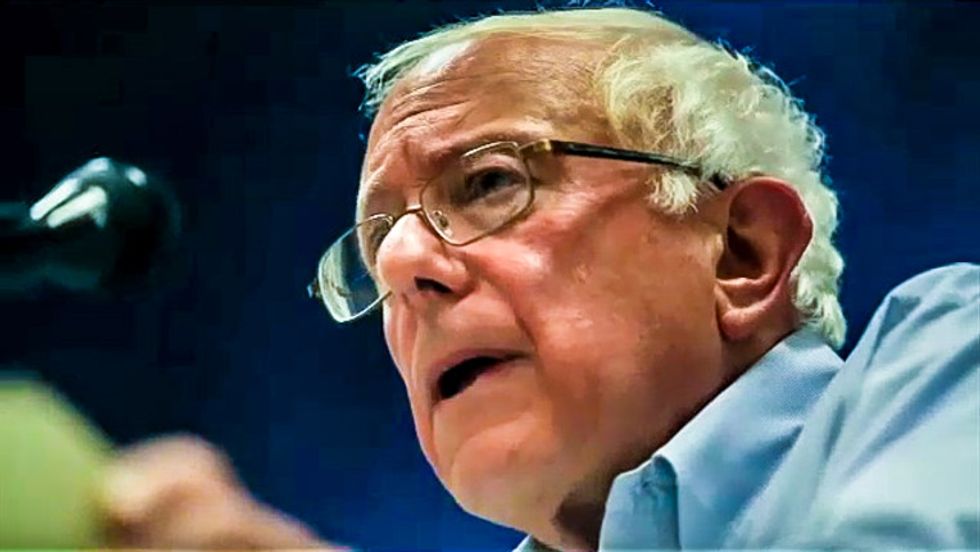 Sen. Bernie Sanders (I-VT) said over the weekend that his top priority was overturning the Supreme Court's Citizen's United decision because he did not believe that U.S. armed forces had "fought and died for democracy so that billionaires can buy elections."

In a speech at Clarke University in Dubuque, Iowa on Saturday, Sanders laid out what many in the audience hoped was an agenda for a 2016 presidential run, according to CNN.

"We need a political revolution in this country," Sanders reportedly told the crowd. "Politics is terribly important, and what happens in Washington and state capitals is also enormously important."

He pointed out that there was a lot of "moaning and groaning" from corporate America about high tax rates.

"In 1952, corporations contributed about 32 percent of all federal revenue," the Vermont senator remarked. "Today they contribute less than 10 percent. One out of four large corporations pay zero in taxes."

"And corporations and the wealthy are stashing huge amounts of money in the Cayman Islands and in other tax havens in order to avoid paying their fair share of taxes, let alone as our panelists talked about, running to Switzerland or elsewhere in terms of tax inversion -- trying to combine with another company to avoid paying taxes."

Sanders noted that the middle class was disappearing, the rate of childhood poverty was rising, families could not afford to send their children to college, but "the wealthy and large corporations are doing phenomenally well."

He said that the first item on his agenda would be to "restore democracy to the United States of America by overturning this disastrous Citizens United Supreme Court decision."

"Why do I put that issue first? Why not health care, why not jobs?" the senator asked. "Because if you end up with a Congress or with governors or legislatures who are beholden to the billionaire class, we are never going to make progress on any issue that impacts working families."

The Koch brothers, Sheldon Adelson, and others were spending billions to elect candidates who supported their interests, he insisted.

"And in my very strong opinion -- and I speak to you as chairman of the veterans committee in the Senate -- I do not believe that people fought and died for democracy so that billionaire can buy elections," Sanders told the audience.

[Correction: This article has been updated to note that Sanders said that corporations were stashing money in the Cayman Islands to "avoid" paying taxes.]

Watch the video below from the Telegraph Herald.