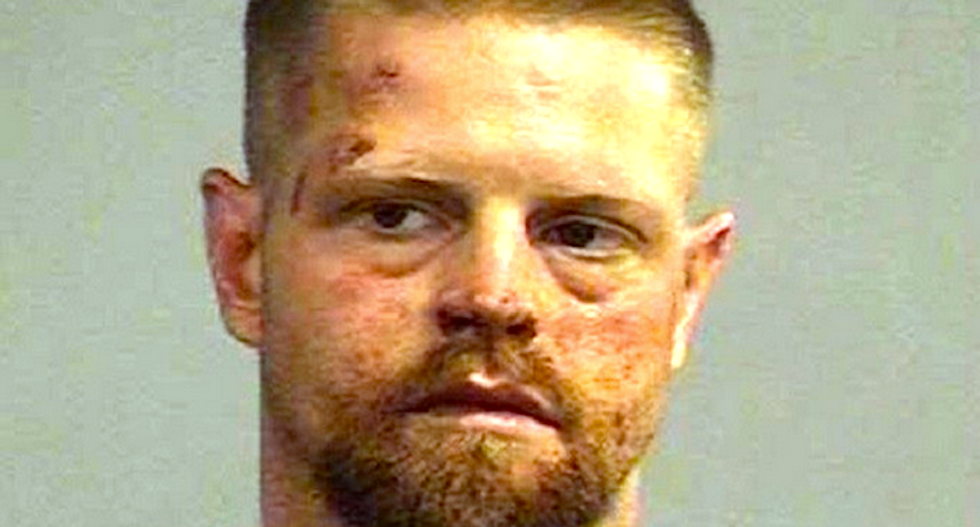 A convicted killer from Indiana is accused of fatally stabbing his ex-girlfriend and eating portions of her brain after she bailed him out of jail.

Joseph Oberhansley was charged with murder, abuse of a corpse, and breaking and entering in the gruesome slaying of 46-year-old Tammy Jo Blanton at her Jeffersonville home.

The 33-year-old Oberhansley – who was previously convicted of manslaughter as a teenager in Utah – was arrested Thursday after Blanton’s co-worker’s called to report she had not come to work.

Officers said Oberhansley had fresh cuts on his knuckles and was acting suspiciously.

A search turned up a folding knife in his back pocket that was covered with blood and hair, and police found Blanton’s mutilated body under a vinyl camping tent in the bathtub.

An autopsy revealed Blanton died from multiple stab wounds to her head, neck, and torso.

Her skull had been crushed, and portions of her heart, lungs, and brain were missing.

Oberhansley told police he cooked and ate the missing organs, and police found a skillet and bloody tongs and some human tissue in the garbage.

"After you've been prosecuting for so long, you think you've seen everything,” said Prosecutor Steve Stewart. “I've never seen this."

Oberhansley appeared Monday in court, where he denied involvement in Blanton’s slaying and disputed his identity.

“That's not my name,” he said when the charges were read. “Obviously you've got the wrong guy."

Oberhansley told the court his name was actually “Zeus Brown,” and he said he did not know his age or whether he was a U.S. citizen.

He remains held without bond, and a public defender will be assigned to him.

Oberhansley was convicted in 2000 of manslaughter and attempted murder in the killing of his girlfriend, 17-year-old Sabrina Elder – who had given birth to his child just days earlier -- and the critical wounding of his mother.

He then put the gun under his chin and fired, and the bullet caused brain damage to his frontal lobe.

Oberhansley was released from a Utah prison on parole in 2012 and arrested again a year later in Indiana for choking another bar patron. Police said he was naked during that attack and resisted arrest.

He was arrested in July after leading Jeffersonville police on a slow-speed chase across the Ohio River into Louisville.

Clark County Prosecutor Jeremy Mull requested a $25,000 full-cash bond after learning of Oberhansley’s criminal record and determining he was a “danger to the community.”

But a deputy prosecutor who was not under Mull’s supervision met with Oberhansley’s attorney and agreed to reduce the bond.

Blanton paid about $500 to bail out Oberhansley, telling the court she was his fiancée.

"I felt he was dangerous,” Mull said. “I was right; he was, and he was released without my knowledge. That devastates me."

The deputy prosecutor who agreed to the reduced bond has resigned.

Police were called to Blanton’s home about seven hours before they discovered her body.

Officers went to the house about 3 a.m. Thursday after Blanton called to report Oberhansley was attempting to break in.

Police said he agreed to leave, but complained officers "always side with women.”

Oberhansley’s mother, Brenda Self, said he woke her up about a half hour later upset about his job and the incident at Blanton’s house.

She went outside to talk to him in his 2002 Chevrolet Blazer, and he left alone a short time later.