Cuban couple reunited in US after year-long sea odyssey 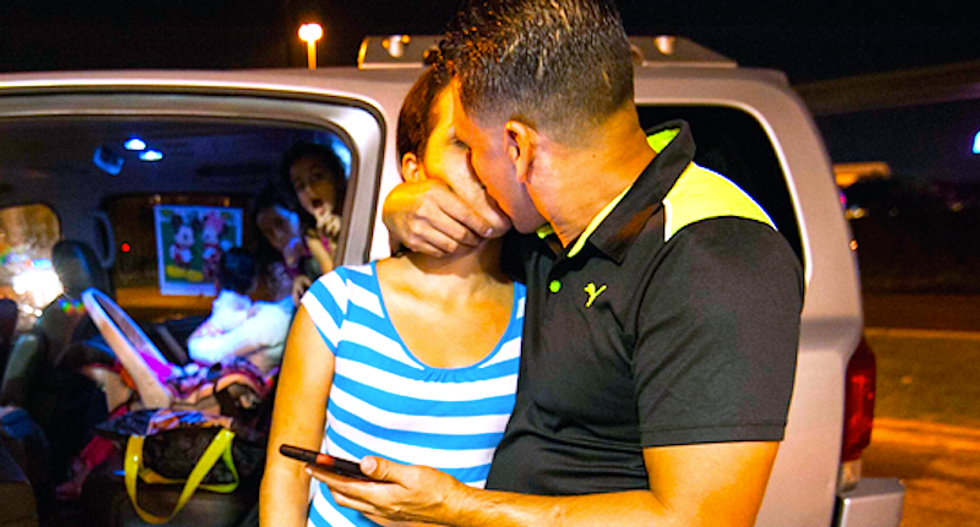 Almost a year after he smuggled his way out of Cuba on a homemade boat, Jose Caballero was reunited late Thursday with his wife who survived a harrowing sea voyage of her own last month.

The two embraced tightly at the Greyhound bus terminal in Austin, Texas, hours after Mailin Perez crossed the border from Mexico, taking advantage of a U.S. policy that allows entry to Cubans arriving by land.

"Right now we're so happy, but exhausted from all the tension. There were so many desperate moments," said Caballero.

Perez, 30, was one of a group of Cuban migrants rescued at sea by Mexican fishermen this month off the Yucatan peninsula badly sunburned and dehydrated after three weeks adrift.

Only 15 of the 32 passengers of her boat survived the journey from Manzanillo in eastern Cuba, with 15 dying at sea, and two more dying after they were rescued.

"It was such a battle to get here," Perez said later, as she sat down to a traditional Cuban dinner of chicken, and "congri" (rice and beans) prepared by her husband. "I'm happy, but sad for the ones who didn't make it."

The group set off on August 7, and were forced to fashion a makeshift sail for their vessel after the motor failed early in the journey. One by one the passengers died as supplies of food, and then water, ran out. Their bodies were thrown overboard.

Caballero, 40, said his wife lost eight cousins on the boat, adding that she had been an assistant at a blood bank in Cuba and brought medical supplies with her.

"For her it's going to be hard. Right now she is happy she made it, but imagine the trauma she feels," he said.

Caballero left Cuba by the same route in December on a boat carrying 47 people, and is now a maintenance worker at a trucking company in Austin. "We were at sea for only nine days and I still have nightmares about drowning," he said.

Mexican officials detained the Cubans for two weeks before releasing them, saying Cuba had not recognized them as its citizens.

Under the "wet foot, dry foot policy" of the United States, Cuban migrants who make it onto U.S. soil are allowed to remain while those intercepted at sea are turned back.

Cubans seeking to flee the communist-run island are heading in increasing numbers to Central America or southern Mexico and then making a long journey overland to reach the United States.

U.S. authorities say 16,200 Cubans arrived without visas at the border with Mexico in the past 11 months, the highest number in a decade.

Caballero said his wife had previously tried unsuccessfully to leave Cuba four times by boat and he tried to persuade her not to try again. "But there was no stopping her," he said.

The couple left two children behind with relatives in Cuba, a boy aged 11 and a girl aged four.

"That's our hope now, to bring them to the United States," said Caballero. "But not the way we came. Not by sea."