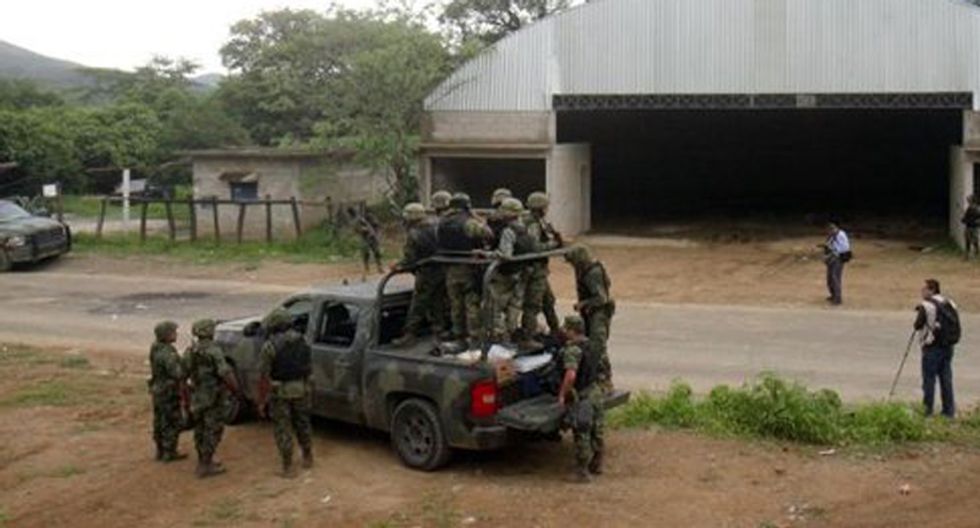 Mexican soldiers patrol the entrance to the Tlatlaya community where 22 people, alleged members of a Drug Cartel, were killed in a confrontation with soldiers of the Mexican Army, on June 30, 2014 (AFP)

The arrest of eight Mexican troops over the killing of 22 people highlights President Enrique Pena Nieto's dilemma of fighting the drug war with the military while avoiding human rights abuses.

The military detained an officer and seven soldiers Thursday on dereliction of duty charges in the high-profile case, after a witness contradicted official accounts that 22 gang suspects were killed in a shootout.

The witness told Esquire magazine that 21 of the suspects, including her 15-year-old daughter, were executed after surrendering, while only one person died during the June 30 gunfight.

Doubts were also raised because only one soldier was wounded in the confrontation in Tlatlaya, a town 240 kilometers (150 miles) southwest of Mexico City.

The military has been dogged by accusations of torture and other abuses ever since then-president Felipe Calderon deployed tens of thousands of troops to combat drug cartels in 2006.

The defense ministry has not identified the detained soldiers and did not specify their roles in the case, which is also being investigated by civilian prosecutors.

The allegations, if confirmed, would be the worst massacre committed by the armed forces since Pena Nieto took office in December 2012.

Interior Minister Miguel Angel Osorio Chong, asked about the case during an appearance in Congress, promised "transparency" in the civilian investigation and said that if any crime was committed, "it would be the exception because we have a great army."

For Jose Miguel Vivanco, Americas director of Human Rights Watch, two crimes were committed in the Tlatlaya case: "A massacre and a coverup."

"The coverup has been the policy that has been historically adopted in Mexico to protect such acts to avoid that anybody is held accountable," he told AFP, calling for investigators to look into any manipulations by higher-ups.

"The risk is that these seven soldiers and low-ranking officer will become the scapegoats to ensure this investigation goes no further," he said.

Legal and human rights experts said the case should be solely handled by the attorney general's office to ensure due process is respected.

Juan Carlos Gutierrez, a human rights expert at the Latin American Faculty of Social Sciences, said the military should transfer its case to civilian prosecutors because the constitution prohibits double trials for the same allegations.

"If the military has evidence or proof, it should immediately transfer the case to the attorney general's office to avoid serious violations of due process," he said.

Hours before the arrests were made public, Defense Minister Salvador Cienfuegos said any violation of fundamental rights by the military "must be taken to the corresponding judicial courts."

The US government, which has provided more than $1 billion in drug war aid to Mexico's security forces, has called for a "credible review" by civilian authorities.

Human rights groups have urged Pena Nieto to withdraw troops from the streets, but he insists they must remain on the ground until Mexicans feel safe.

Javier Oliva, a security expert at Mexico's National Autonomous University, said the Tlatlaya case was a "dramatic lesson" for the government.

"This is very dramatic evidence of the risks of the overexposure of the armed forces when local authorities don't take their responsibilities regarding security," Oliva told AFP.

More than 80,000 people have died in turf wars between cartels and confrontations with security forces in the past eight years.

Last month, a coalition of rights groups asked prosecutors of the the International Criminal Court to investigate allegations of widespread abuses committed by Mexican security forces against civilians in Baja California between 2006-2012.

But Oliva said the government is forced to use the military to fight crime because local authorities are too weak.

"You remove the soldiers or marines and security will collapse," he said.