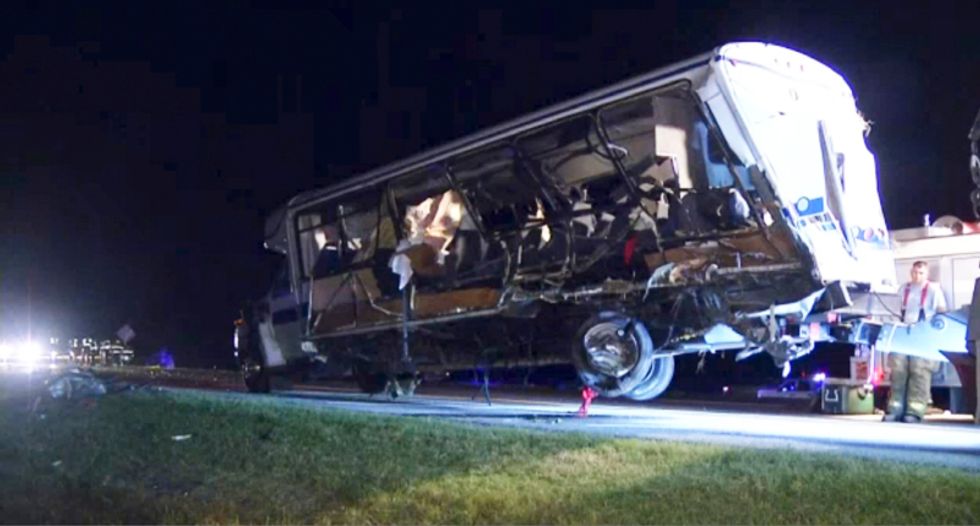 The North Central Texas College bus that was involved in a crash is being removed near Ardmore, Oklahoma September 26, 2014 in this still image captured from KXAS TV video footage. REUTERS/Courtesy KXAS/Handout

Reuters) - Four members of a women's college softball team were killed and a dozen other people were injured when a truck crashed into the players' bus on an Oklahoma highway late on Friday, authorities said.

The crash occurred around 9 p.m. when a semi truck crossed over a median into oncoming traffic north of Ardmore, Oklahoma, and collided with the bus, Oklahoma Highway Patrol Captain Ronnie Hampton said.

Three members of the "Lady Lions" North Central Texas College softball team were pronounced dead at the scene, and a fourth player died after being taken to a hospital, Hampton said.

"This is the most traumatic event that NCTC has had in it's 90 years of history," the college's president, Brent Wallace, told reporters on Saturday, crying as he spoke.

Fifteen members of the team were on the bus with their coach traveling back from a game at Southern Nazarene University, about 150 miles north of their college in Gainesville, Texas.

After the crash on Interstate 35 in southern Oklahoma, multiple students were rushed to hospitals, two by helicopter and the others by ambulance.

The truck driver was hospitalized as well, Hampton said. The softball team's coach, who was driving the school bus, refused treatment at the scene.

The conditions of the injured were not immediately available.

Both vehicles were severely damaged, but fires did not break out, Hampton said.

A homicide investigation was under way and the National Transportation Safety Board was arriving on Saturday to investigate, the officer said.

Wallace described his college, and especially its sports teams, as being tight-knit.

In response to the crash, games scheduled for the school's sports teams were canceled over the weekend.

"We have made a decision to bring back some of our other traveling teams because it has impacted their emotions," Wallace said.

On social media, people sent their condolences to the families of the women who were killed or injured. The women's names have not been released.

"We lost four beautiful amazing girls," the softball team wrote on its Facebook page on Saturday. "Such sweet lives gone way too soon!"

A vigil is scheduled for Sunday at the college, Wallace said.