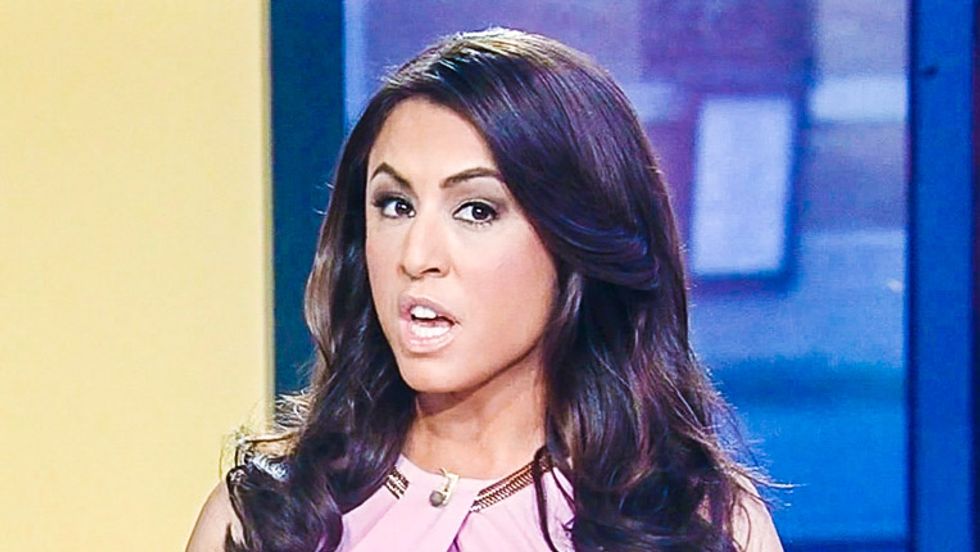 Fox News host Andrea Tantaros on Wednesday recommended a possible solution to the domestic violence scandals that have been recently plaguing the NFL: "a little more God."

Outnumbered host Harris Faulkner wondered on Wednesday if changes made after the world saw video of Ray Rice abusing his then-girlfriend and reports that Adrian Peterson abused his son meant that the country was "looking at a new NFL."

"I don't know about that," the Fox News host said. "They had the opportunity to suspend [Peterson] and I'm guessing they knew about this second child abuse indictment that was coming down the pike. I don't think they were surprised."

"I think the NFL now stands for not freaking listening," she quipped. "Because they would have acted sooner. And why all the delays?"

Tantaros argued that the NFL was also "misguided in their focus" because Robert Griffin III had turned a shirt with the words "Know Jesus, Know Peace" inside out at a press conference this week. Some speculated that an NFL uniform inspector forced Griffin to turn the shirt inside out because the league has an exclusive contract with Nike. Others observed that the league had a rule against "personal messaging."

An NFL spokesperson said that it had been Griffin's choice to wear the shirt inside out.

"I'm thinking, where are your priorities?" Tantaros opined on Wednesday. "I mean, the NFL could use a little more God, and a little less of this other stuff."

But co-host Susan Smith predicted that all the NFL scandals would "go away" because "people's memories are very short."

"Look, the Vikings, did they let [Peterson] back onto the field too soon? Possibly," she remarked. "How were they to know that there was another 4-year-old that was possibly being abused by this player."

"There's still a lower number of incidences of domestic and child abuse in the NFL than the average population," Smith added. "So, this is an image problem that the NFL has to deal with that will eventually get solved and go away."

Watch the video below from Fox News' Outnumbered, broadcast Sept. 17, 2014.