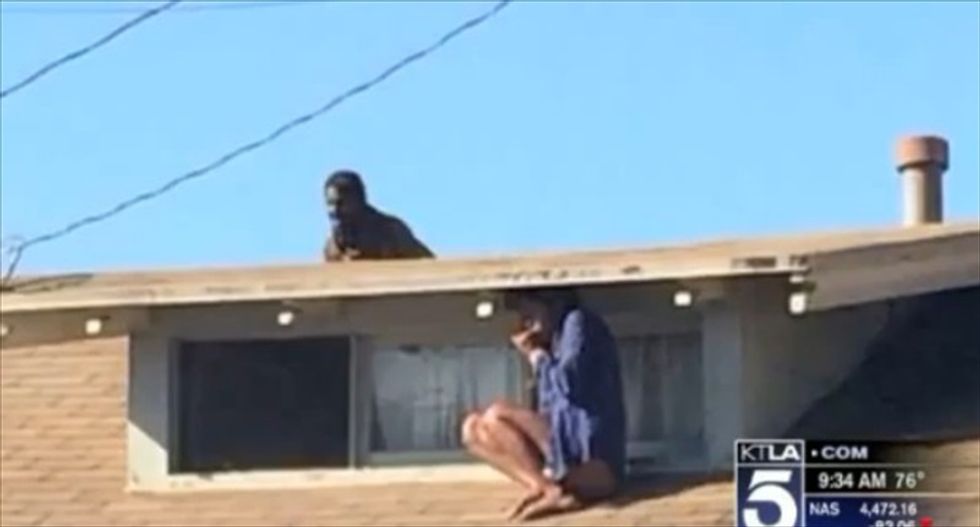 Homeless man chases Calif. woman onto her own roof [KTLA-TV]

Police in Venice, California arrested a 29-year-old homeless man on Wednesday for breaking into a woman's house and following her onto her roof while she alerted authorities, KCAL-TV reported.

"The drop is, I would guess, more than 20 feet," the victim, Melora Rivera, said. "So there was no safely jumping off the roof or coming down from the roof at that point."

Rivera said the suspect, Christian Hicks, forced his way in through the front door while she was in bed. She made her way up to the roof wearing only a flannel shirt and carrying her phone to call for help.

KTLA-TV reported that a nearby resident, Alexandria Thompson, took pictures of the encounter and posted them on a Twitter account alerting Venice residents to local emergencies.

"The scary thing for me is, if someone's gonna break into your house while you're sleeping -- and she had the wherewithal to leave, to flee -- and that person follows you onto the roof, what do you think is gonna happen?" Thompson told KTLA.

Hicks was charged with burglary and is being held on $50,000 bail. Witnesses said Hicks has been seen in the area before. He was also allegedly detained earlier in the day for entering another resident's yard and released when he could not be identified.

Rivera, an actress, reportedly chose to stay somewhere else in the immediate aftermath of the incident, which she attributed in part to a lack of attention for Venice's homeless population.

"I think it's very obvious for most of us who live around here, when someone seems to be suffering from a mental illness, and to continue to let these people walk around without offering them assistance, to protect them and us," she told KCAL. "That, I think, is the heart of the problem."

Watch KCAL's report, as aired on Wednesday, below.