Hong Kong protesters reject demands to end rallies: 'Nothing can stop us' 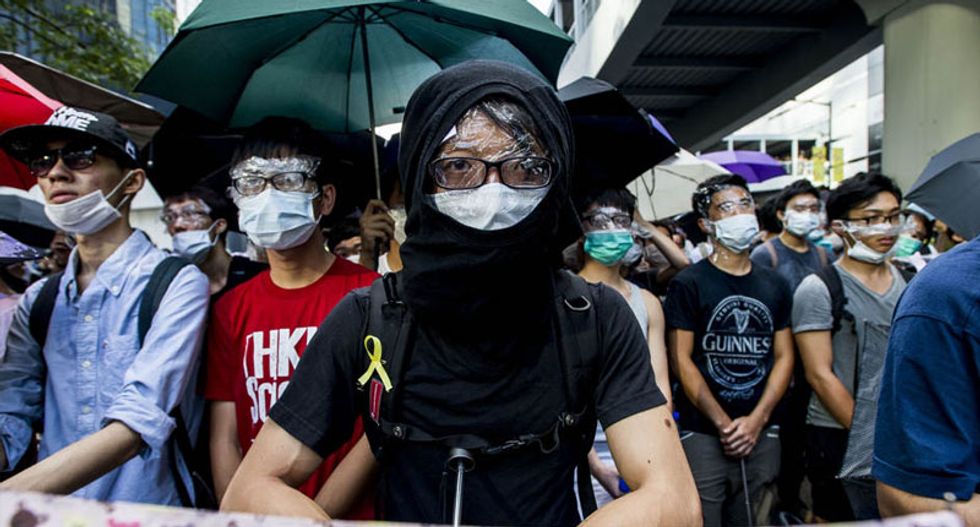 A protester uses a mask and plastic to protect himself from pepper spray during a demonstration at the government headquarters in Hong Kong on September 27, 2014 (AFP Photo/Xaume Olleros)

Hong Kong demonstrators rejected demands immediately to end rallies that have paralysed the city's downtown, their numbers swelling for a third night before a national holiday Wednesday expected to put their campaign for free elections into overdrive.

Protest leaders are confident of mustering massive crowds, angered at Beijing's refusal to grant full democracy, overnight and into Wednesday for the National Day public holiday marking the 65th anniversary of the founding of Communist China.

Thousands ignored a call from the city's embattled leader to end the sit-in, as well as Beijing's branding of their demonstrations as "illegal", to take to the streets of the key financial hub.

A heavy downpour briefly sent umbrellas skyward and crowds scurrying, but the prospect of bad weather left the crowds undeterred.

"We have spent more than a week under the sun, under pepper spray, we of course can stand the rain. Nothing can stop us," a recent university student who identified himself as Choi told AFP.

Beijing has been left grappling with one of the biggest challenges to its rule over the semi-autonomous city at a time when the Communist Party is cracking down hard on dissent on the mainland.

In his first public comments since demonstrators were tear-gassed by riot police on Sunday evening, Chief Executive Leung Chun-ying said the pro-democracy sit-in organised partly by the Occupy Central group was now "out of control".

"Occupy Central founders had said repeatedly that if the movement is getting out of control, they would call for it to stop. I'm now asking them to fulfil the promise they made to society, and stop this campaign immediately," he said.

But protest leaders rejected Leung's demands and renewed calls for the Beijing-backed leader to step down.

"I think there will be a massive turnout, over 100,000 people tonight and leading into National Day," hedge fund manager and Occupy Central activist Ed Chin told AFP.

The demonstrations, the most intense civil unrest Hong Kong has experienced since its 1997 handover from British rule, were sparked by Beijing's decision in August to restrict who can stand for the city's top post.

British Deputy Prime Minister Nick Clegg said on Tuesday he will summon China's ambassador to London over the protests to express his "dismay and alarm" about the refusal to grant free elections.

Hong Kongers will be able to vote for their next chief executive in 2017 but only two or three candidates vetted by a pro-Beijing committee will be allowed to stand -- something demonstrators have labelled a "fake democracy" that shows Hong Kong cannot trust its mainland overseers.

Throughout Tuesday morning protester numbers dwindled from overnight highs, when tens of thousands turned the city's downtown into a carnival after riot police withdrew.

But they began to pick up again by the afternoon.

"We are all afraid, but we think we should keep on resisting for full democracy," Jacky Yip, a 22-year-old university student told AFP as thunder rumbled ahead.

"Never lose hope," was one of the signs offering words of encouragement on the streets, alongside hundreds of messages, some in other languages.

Protesters have two demands -- that Leung step down and Beijing rescind its insistence that his successor be vetted before standing for election.

"If the government does not respond after October 2, the action will inevitably be stepped up," Alex Chow, chairman of the Hong Kong Federation of Students, told reporters.

Influential student leader Joshua Wong, who was detained by police last week, said Hong Kong's leader was the "only one" who could end the protest.

"Everyone here has the power. We're here for the bargaining chip with Beijing," he said.

"Leung Chun-ying and the government are feeling incrased pressure," he added.

But analysts say the chances of Beijing backing down are virtually non-existent, leaving a city once renowned for its stability plunged into an unknown future -- with democracy activists concerned the police could return in force at any moment.

Beijing stayed defiant Tuesday, saying it supported Hong Kong's handling of the protests, which it described as "illegal activity".

Communist authorities are worried that dealing with the protests too softly could encourage wider demands for greater freedoms on the mainland, observers say.

Business leaders complain that the protests are hitting the economy. The world's top cosmetics group L'Oreal said on Tuesday it was suspending all business travel to Hong Kong due to the street demonstrations.

Many locals have expressed frustration at the huge disruption, with the crowds blocking key junctions.

Police Tuesday again called for the protesters to disperse, saying emergency services were being disrupted by the ongoing blockade of major carriageways.

But the demonstrations have also prompted displays of solidarity. Some social workers and teachers went on strike after unions called for members to take action.