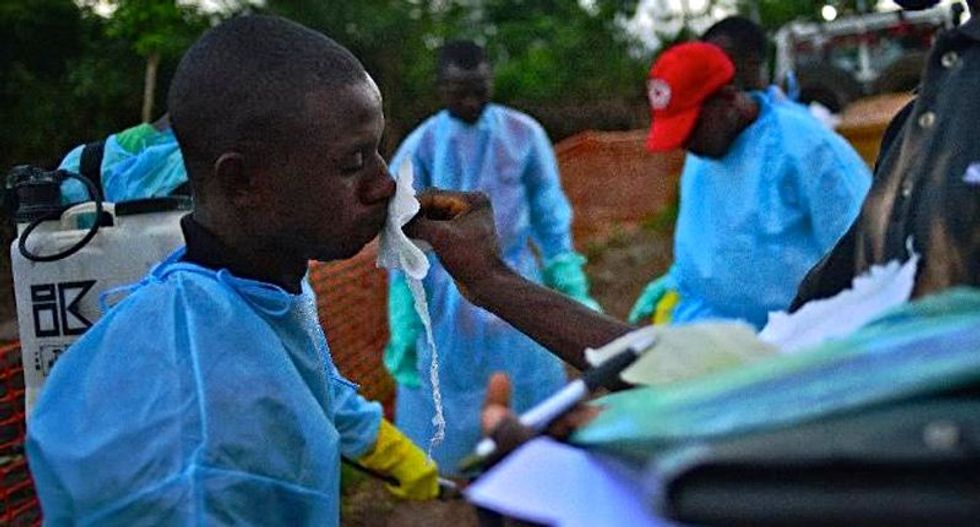 Government burial team members are disinfected after loading the bodies of Ebola victims onto a truck in Kailahun, Sierra Leone, on August 14, 2014 (AFP)

The International Monetary Fund fast-tracked $130 million (102.5 million euros) in aid to fight the Ebola epidemic after the governments of the worst-hit countries in west Africa said they were desperately counting on promises of global aid to be backed up with cash.

The IMF's executive board said it wanted to help Guinea, Liberia and Sierra Leone respond to the rapidly spreading outbreak that has killed some 3,000 people since December.

US President Barack Obama said west Africa had been "overwhelmed" by the crisis.

"Public health systems are near collapse," Obama told a global health summit at the White House.

He warned that the disease was causing economic growth to slow in the region and putting huge strain on governments.

The president called on the world to do more to prevent such epidemics.

"We have got to make sure we never see a tragedy on this scale again," he said.

Obama this week led calls at the United Nations for faster global action to confront Ebola.

The UN has estimated that nearly one billion dollars will be required to effectively fight the disease and funding has been slow to materialise.

The government of Liberia, the hardest-hit nation with almost 1,700 deaths, welcomed pledges of help from world leaders gathered at the UN but warned it was losing the trust of its own people as the crisis escalated.

"We are happy to hear that the entire world now understands the urgency of the reaction to the threat of Ebola," Liberian Information Minister Lewis Brown told AFP, speaking before the IMF funding decision.

"We hope that the commitment will be quickly followed by action because, if this drags for long, the populations of the various countries will begin to lose patience and they will blame our governments."

IMF managing director Christine Lagarde in a statement that the Ebola outbreak has already cost too many lives.

"The IMF is working hard with the authorities of the affected countries and their development partners to ensure that the outbreak is quickly brought under control and to assist the economic rebuilding effort that must follow," she said.

The IMF financing, requested by the three governments, will be made available immediately: Guinea, $41 million; Liberia, $49 million; and Sierra Leone, $40 million.

Sierra Leone took the drastic step on Thursday of putting another three of its 14 districts under quarantine, meaning that more than a third of the population of six million can no longer move freely.

Health systems in Sierra Leone, and in Liberia and Guinea, are in dire need of doctors, nurses, medical equipment and supplies.

"If everything goes well, we may be able to begin using some of these vaccines in some of the affected countries at the very beginning of next year," WHO assistant director general Marie-Paule Kieny said.

Currently, there is no licenced treatment or vaccine against the virus, and the UN health agency has endorsed rushing experimental prototypes through testing.

WHO is focusing on two vaccines: one made by British company GlaxoSmithKline (GSK), and the other by US group NewLink Genetics. It is working with both companies to accelerate clinical trials, Kieny told reporters in Geneva.

Another experimental vaccine by US company Johnson & Johnson (NYSE: JNJ - news) had not been ruled out, but "they are clearly behind by a few months," she said.

Some clinical trials of the GSK vaccine have begun in the United States and Britain, and other trials are expected to begin in Mali next week.

Trials of the NewLink vaccine are also set to start "imminently" in the United States.

If shown to be safe, thousands of doses of both experimental vaccines should be available by January.

WHO is also trying to accelerate the development of around half a dozen treatments for Ebola, including the prototype ZMapp drug already given to US and Spanish aid workers with promising results.

Supplies of the drug have been exhausted.

Following Obama's call to action, officials could not provide an immediate tally of the total pledges made at the UN meeting but the organisation's coordinator for Ebola, David Nabarro, said countries had "responded with generosity".

Canada announced a contribution of $27 million (21 million euros) while France said it had set aside 70 million euros.