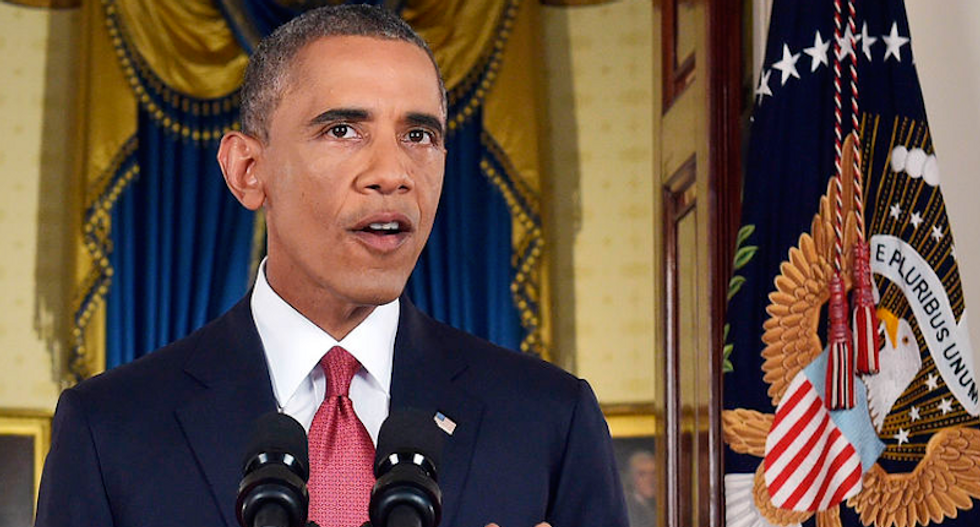 After about 15 hours of flying and five hours of meetings, sleep finally caught up with U.S. Secretary of State John Kerry in Baghdad. It was 6:04 p.m.

After sinking into his seat at the center of the cavernous interior of a C-17 military transport plane, he cradled his head in his palm, put his feet on a desk and shut his eyes.

Visibly tired, too, were his retinue of aides as they took their seats, some clutching briefing papers with notes scribbled in the margin from meetings with Iraqi Prime Minister Haider al-Abadi and the government he had formed a day earlier on Sept. 9.

Kerry’s exhaustion was understandable after nearly 24 hours of non-stop travel and meetings.

America’s fatigue in the Middle East could be a different story: the Iraqis who met Kerry may wonder if his boss, President Barack Obama, has the energy or stomach for what lies ahead in a country he has spent most of his nearly six years in office trying to leave behind.

The challenge is highlighted by a Reuters/Ipsos poll on Friday showing that while Americans support Obama's campaign of airstrikes against Islamic State militants, they have a low appetite for a long campaign against the group.

Several important tests loom for the U.S. administration's nascent coalition to “degrade and defeat” the ultra-hardline Islamic State whose militants have seized a third of both Iraq and Syria, declared war on the West and beheaded two American journalists and one British aid worker.

The complexity of eliminating Islamic State, which requires stabilizing Iraq, building up its armed forces and creating a western-backed rebel force in Syria, could take years, testing Obama's commitment and that of whoever succeeds him in 2017.

"There’s a real general distrust among our regional allies about our commitment to this because we've been missing in action for the last three years," said David Schenker, a specialist on Syria at the Washington Institute for Near East Policy and a former Pentagon adviser on Syria during President George W. Bush’s administration.

In Baghdad, Amman, Jeddah, Ankara, Cairo and Paris in the last week, Kerry laid plans for a U.S.-led coalition of regional and outside powers. It would hammer the black-clad fighters of Islamic State militarily, dry up its funding, eliminate its safe havens in Syria, block its ability to recruit fighters and try to extinguish its extremist ideology.

Kerry, who will report on his trip to Obama and Congress this week, insists this is different from past U.S. operations in the region.

France sent jets on a reconnaissance mission to Iraq, a step towards becoming the first ally to join the U.S.-led air campaign there and a senior U.S. official said some Arab countries had promised to take part.

On Friday, Kerry will chair a meeting of the U.N. Security Council in New York, which will provide countries which quietly backed the U.S. coalition an opportunity to do so publicly.

But questions remain over how far each will commit to a fight that U.S. Defense Secretary Chuck Hagel said on Tuesday "will not be an easy or brief effort."

A 45-page State Department document detailed offers of assistance from about 40 countries, but these are mostly humanitarian. Military commitments are rare and small. Albania, for instance, plans to provide 22 million rounds of AK-47 bullets, 15,000 hand grenades and 32,000 artillery shells to Kurdish forces in Iraq.

U.S. fighter jets have conducted over 160 airstrikes on Islamic State positions in Iraq, resuming military action Obama and many Americans hoped were part of history when U.S. combat forces pulled out of the country in 2011.

The most senior U.S. military officer, General Martin Dempsey, raised the possibility on Tuesday that American troops might need to take on a larger role in Iraq's ground war, though Obama also ruled out a combat mission.

U.S. officials play down the prospect of imminent air attacks on the Islamist group's heartland in Syria and it remains unclear who, if anyone, would join them.

The United States will present a legal case before going into Syria, U.S. officials say, justifying strikes largely on the basis of defending Iraq from militants who threaten its sovereignty and have taken shelter in neighboring Syria during its three-year-old civil war.

Entering Syrian airspace would deepen a conflict that already cuts across sectarian lines. Islamic State is made up of Sunni militants fighting a Shi'ite-led government in Iraq and a government in Syria led by members of a Shi'ite offshoot sect.

Briefing U.S. reporters in Paris, Kerry said there were "several discussions with foreign ministers" on how to defeat Islamic State inside Syria. He did not go into specifics, but he emphasized that it was not just about the airstrikes.

Kerry and his advisers often describe the anti-Islamic campaign as "holistic". The approach was set out in a six-paragraph communique issued on Sept. 11 and signed by 10 Arab countries - Egypt, Iraq, Jordan, Lebanon and six Gulf states including rich rivals Saudi Arabia and Qatar.

"We wanted to be an overall coordinator of this effort," the official said. "So, ‘as appropriate’ means as part of an overall campaign plan, and as this continues to move forward."