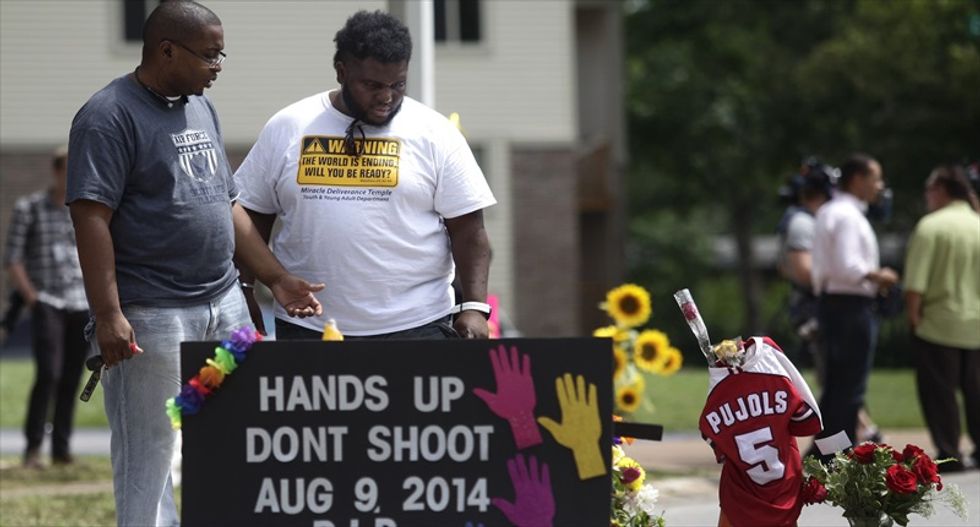 Two men stand over the makeshift memorial for Michael Brown in Ferguson, Missouri in this August 19, 2014 file photo. REUTERS/Joshua Lott/Files

The U.S. Justice Department asked the Ferguson, Missouri, Police Department on Friday to order its officers not to wear bracelets with the name of the white officer who shot and killed an unarmed black teenager last month, sparking protests.

In a letter to Ferguson Police Chief Tom Jackson, the Justice Department said residents had told federal investigators that officers policing protest sites on Tuesday in Ferguson were seen wearing "I am Darren Wilson" bracelets.

Wilson killed 18-year-old Michael Brown on Aug. 9, causing outrage in the mostly black St. Louis suburb of 21,000 people. Wilson has not been charged in the case.

The Justice Department has opened an investigation into the shooting and the police treatment of protesters, which critics say was unduly harsh.

The letter said the bracelets had "upset and agitated" people and "reinforce the very 'us versus them' mentality that many residents of Ferguson believe exists."

The DOJ said it had been assured by officials with the county and state police, which have been brought in to help in Ferguson, that their officers would not wear the bracelets.

Ferguson police could not be reached for comment on Friday evening.

In a separate letter sent to Jackson earlier this week, the Justice Department said its investigators had observed Ferguson police officers not wearing, or obscuring, their name tags on their uniforms, a violation of the police department's rules.

"The failure to wear name plates conveys a message to community members that, through anonymity, officers may seek to act with impunity," the letter said.

Jackson, following weeks of heavy criticism and calls for his ouster, issued a video apology to Brown's parents on Thursday. He later began marching with a group of protesters, but a scuffle broke out near him and several people were arrested, CNN and St. Louis television station KMOV said.

Protesters have pledged continued civil unrest until Wilson is arrested and charged in Brown's death. In addition to the Justice Department probe, a grand jury in St. Louis County is examining the case.