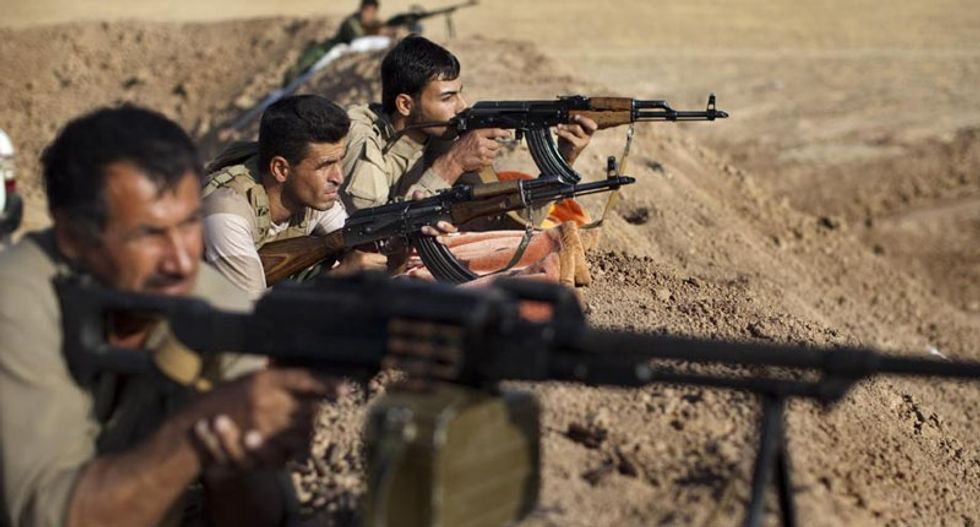 Kurdish troops backed by warplanes battled the Islamic State group on three fronts in northern Iraq on Tuesday, clawing back land they lost to the jihadists in recent months.

The Kurdish peshmerga struck before dawn against the town of Rabia on the Syrian border, north of the jihadist-controlled second city Mosul, and south of key oil hub Kirkuk, officers said.

A senior source in the peshmerga said troops had entered Rabia, after seizing the villages of As-Saudiyah and Mahmudiyah.

"Ground troops are now fighting in the centre of Rabia," which lies about 100 kilometres (60 miles) northwest of Mosul.

He said peshmerga forces, backed by artillery and warplanes, were also attacking Zumar, about 60 kilometres (40 miles) northwest of the city, near the reservoir of Iraq's largest dam, which has been a key battleground between the Kurds and the jihadists.

"We have ousted IS from 30 positions, including in the Zumar and Rabia areas," peshmerga spokesman Halgord Hekmat said.

Both Rabia and Zumar were areas which the peshmerga seized in the chaos that followed the jihadists' capture of Mosul in a lightning offensive in early June.

IS forces made a fresh push two months later and inflicted stinging setbacks on the peshmerga, one of the reasons for the US air campaign that began on August 8.

The officer, who spoke to AFP on condition of anonymity because he is not authorised to talk to the press, would not elaborate on the nature of the air support received in Zumar.

France has carried out air strikes in Iraq, British fighter jets are also active in Iraq's skies and Iraqi jets conduct daily operations across the country.

"The advance on Rabia will facilitate efforts to recapture Sinjar. We cannot reach Sinjar without taking Rabia," Hekmat said.

Sinjar is a town further southwest which the jihadists captured in early August, prompting tens of thousands of civilians -- mostly from the Yazidi minority -- to flee their homes.

In one of the most dramatic episodes of the nearly four-month-old conflict, some Yazidis were besieged for days in nearby mountains where they took refuge, while others were killed or abducted during their flight from the town.

South of Kirkuk, peshmerga forces retook several villages around the town of Daquq, that had been under jihadist control since June 10, also with air support.

"They have liberated the villages of Saad and Khaled. The peshmerga have taken full control of the area, following fierce fighting," General Westa Rasul said.

He said peshmerga forces were now advancing on the nearby village of Al-Wahda, around 30 kilometres (20 miles) from Kirkuk, but were encountering stiff resistance.

An official from the Kirkuk health directorate said two peshmerga were killed and 18 wounded in the fighting.