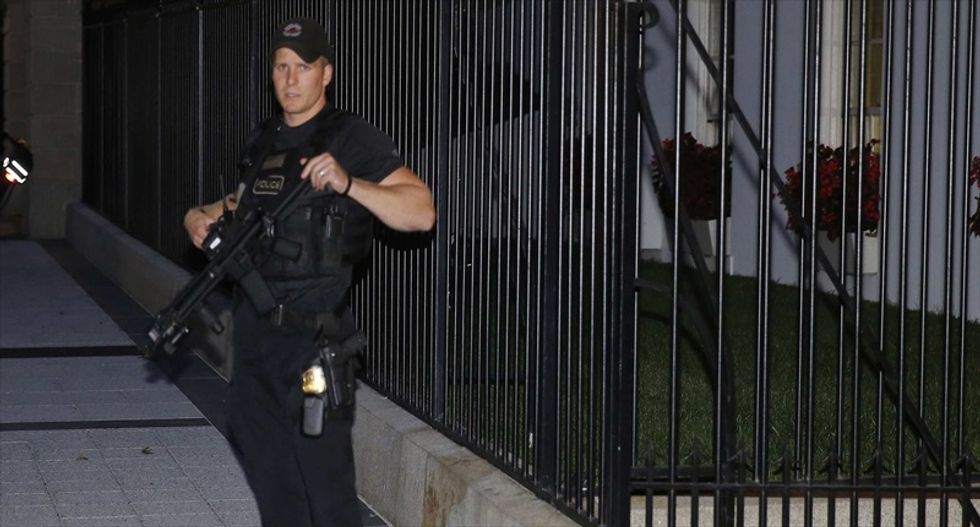 An armed U.S. Secret Service agent with an automatic rifle guards the White House complex during an evacuation over a security alert moments after U.S. President Barack Obama and his family left for the presidential retreat, Camp David, in Maryland, on Sept. 19, 2014. By Larry Downing for Reuters.

U.S. lawmakers scolded the head of the U.S. Secret Service on Tuesday over a security breach that allowed a knife-wielding intruder to run deep into the White House and called for a broad, independent probe into the agency's operations.

Secret Service Director Julia Pierson acknowledged the agency charged with protecting the president had failed on Sept. 19 when it allowed a man to jump the fence at the home of the president, burst through the front door and run about 130 feet (40 meters) into the East Room, which is used for events and receptions.

"This is unacceptable and I take full responsibility," Pierson told a U.S. House of Representatives committee investigating the incident.

"We are all outraged within the Secret Service at how this incident came to pass. It is self evident mistakes were made," she said, promising lawmakers that it would never happen again.

House Oversight Committee Chairman Darrell Issa, a Republican, said an internal probe was insufficient to rebuild trust in the agency, and that he and Democrat Elijah Cummings would demand the Department of Homeland Security conduct an independent inquiry.

As a first step, Pierson said the front door of the White House now has an automated lock when there is a security breach. It did not have one at the time of the intrusion.

Any disciplinary actions, however, would be based on the agency's internal probe. "Enhancements will be made and personnel actions will be taken," she said.

The incident is the latest black mark for the Secret Service, which has suffered a series of scandals including a lone gunman firing shots at the White House in 2011, a prostitution scandal involving agents in Colombia in 2012 and a night of drinking in March that led to three agents being sent home from a presidential trip to Amsterdam.

In a hearing of more than three hours, lawmakers offered scathing criticism of Pierson's initial statement a day after the incident, which made it appear that intruder Omar Gonzalez was apprehended just inside the door.

But she acknowledged on Tuesday that Gonzalez, an Iraq war veteran, struggled with an officer inside the door and crossed through a large foyer into a hallway and most of the way through the 80-foot (24-meter) East Room.

Members of both parties said the incident damaged the agency's reputation and punctured the image of invulnerability that helps protect President Barack Obama. The president and his family had left to spend the weekend at the presidential retreat at Camp David shortly before the intrusion.

Gonzalez will return on Wednesday to federal court, where he has been charged with unlawful entry while carrying a weapon. A federal grand jury indicted him on Tuesday on that federal offense, along with District of Columbia charges of carrying a dangerous weapon outside a home or business and unlawful possession of ammunition.

"The White House is supposed to be one of America's most secure facilities," Issa said. "How on earth did this happen?"

Another Republican, U.S. Representative Jason Chaffetz, pressed Pierson on when officers can use lethal force against intruders in a modern era of suicide bombers. She said such decisions were up to officers, but they first need to determine that they or others are in imminent danger.

'WE'RE GONNA TAKE YOU DOWN"

Chaffetz told Pierson: "I want it to be crystal clear. You make a run and a dash at the White House, we’re gonna take you down. I want overwhelming force. Do you disagree with me?"

Pierson replied, "I do want officers and agents to execute appropriate force for anyone intending to challenge and breach the White House."

White House spokesman Josh Earnest said Obama had confidence in Pierson and said she did not offer her resignation. Earnest said Pierson "took responsibility for ensuring that the necessary reforms were implemented to ensure it never happens again. That is a sign of leadership."

Pierson said the Secret Service had apprehended 16 fence jumpers in the last five years, including six this year. On Sept. 11, someone was caught seconds after scaling the fence.

Lawmakers questioned why Gonzalez had escaped more scrutiny. In July, he was arrested in Virginia for reckless driving, eluding police and possessing a sawed-off shotgun. In August, he was stopped, but not arrested, while walking along the south fence of the White House with a hatchet in his waistband.

Pierson said the agency was down about 550 employees from its optimal level, and there had been staff reductions following automatic spending cuts and "other fiscal constraints."

Obama appointed Pierson, 55, a 30-year Secret Service veteran, in March 2013. The first female director in the agency's 148-history, she was given the mission of cleaning up the agency's culture.