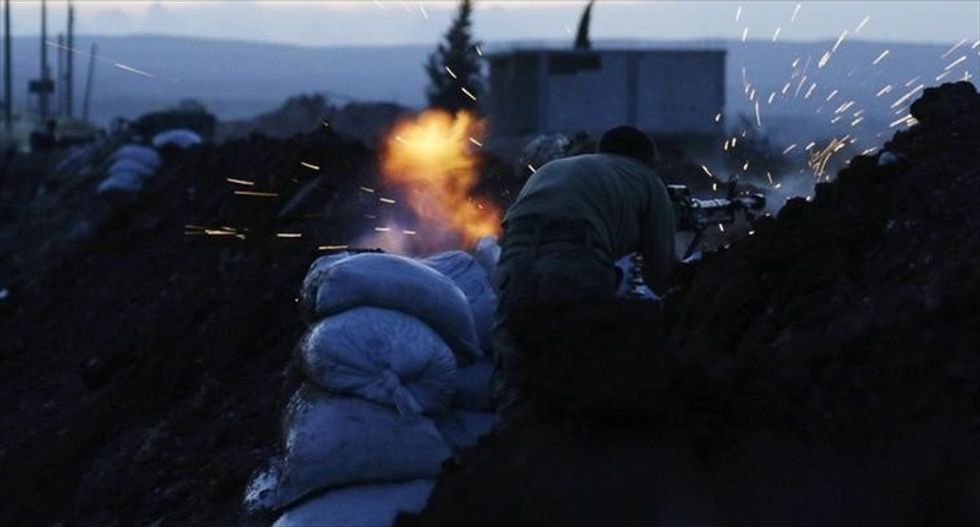 A rebel fighter takes a position as he fires his weapon towards forces loyal to Syria's President Bashar al-Assad who are stationed in Wadi al-Deif military camp in Idlib province June 1, 2014. Picture taken June 1, 2014. By Khalil Ashawi for Reuters.

The U.S. House of Representatives will begin debating legislation on Tuesday to give President Barack Obama approval for arming and training rebels who oppose both Islamic State militants and Syria's government.

Republican lawmakers unveiled a measure, written with input from the White House, that would quickly provide the authority - but not the funding - that Obama wants to equip and train the moderate Syrian rebels.

The measure sets conditions including barring the use of U.S. ground forces and requiring the administration to submit regular progress reports on the plan and its vetting of the rebels receiving the training and equipment.

The plan is a major component of Obama's campaign to stop Islamic State militants who have seized large swaths of Iraq and Syria, where both the Islamic State and the moderate rebels are waging a three-year-long civil war against the government of President Bashar al-Assad.

"I think the new language is appropriate. It puts a check on the administration, prevents the introduction of combat boots on the ground, requires very close monitoring by the Congress, all along the way," said Kentucky Republican Representative Hal Rogers, chairman of the House Appropriations Committee.

The measure was written as an amendment to a stop-gap spending bill that both houses of Congress must pass to keep the government open after the fiscal year ends on Sept. 30.

House Republican aides said the amendment will get a separate vote on the House floor, likely on Wednesday, before a vote on final passage of the stop-gap spending bill. Both measures would expire on Dec. 11, requiring further action by Congress after the Nov. 4 congressional elections.

The amendment does not include $500 million the White House requested to pay for the arms and training. But it allows the Pentagon to later submit reprogramming requests to shift funds within the budget if it needs money for the program.

Those requests can be granted with the approval only of certain committee leaders, not the full Congress.

"At this point, what's most important is for us to have the training and equipment program in place," a senior administration official said, adding that the White House did not have "the luxury" to wait through a potential fight in Congress over the money.

Some lawmakers expressed reservations about what has been called a "war vote." But many were pleased to have oversight of the expansion of what had been a limited, covert operation supporting the moderate rebels.

"Look, we don't live in a perfect world and these aren't perfect bills, but I think the fact that they are being brought up before we go home is commendable," said New York Representative Eliot Engel, the top Democrat on the House Foreign Affairs Committee.