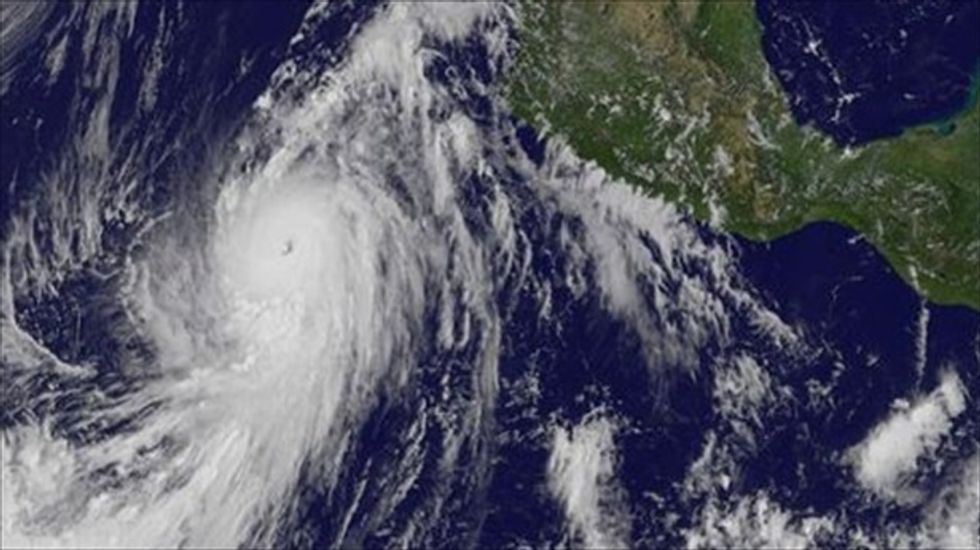 Odile weakened slightly to category three strength in the five-level Saffir-Simpson scale as it crept toward the Baja California peninsula, packing 125 mile (205 kilometer) per hour winds, according to the US National Hurricane Center.

"All preparedness actions to protect life and property should be rushed to completion," the Miami-based center said, warning the hurricane could produce life-threatening floods and mudslides.

The core of Odile will pass close to, or over, the southern tip of the peninsula, known for its luxury resorts, late Sunday and Monday, it added.

Hotel occupancy in Los Cabos is low at this time of year, but authorities evacuated an unspecified number of people from vulnerable coastal areas and prepared shelters for 30,000 residents as heavy rain covered the region.

Operations at Los Cabos international airport were suspended. Authorities said electricity and water services would be halted in rural towns.

Nearly 1,000 marine troops were deployed to help the population.

The hurricane had grown to category four strength earlier in the day before weakening, though forecasters warned that it could regain power before nearing Baja California.

Calling Odile a "highly dangerous" hurricane, National Water Commission director David Korenfeld said a weather alert was issued for the entire peninsula for at least the next 24 hours.

The hurricane was moving erratically and veering dangerously toward land, Caballero said.

He added that it could miss Los Cabos and enter the Gulf of California instead, so safety precautions needed to be taken in the nearby Mexican states of Sinaloa, Nayarit and Colima as well.

The hurricane is expected to produce a dangerous storm surge, with large waves, which could produce "significant" coastal flooding in parts of Baja California.

Five to 10 inches of rainfall are expected in the peninsula, with rain bands moving through the states of Colima, Jalisco and Michoacan likely to spark life-threatening flash floods and mudslides, forecasters said.

The hurricane advanced around the one-year anniversary of a twin tropical storm battering on both coasts that left 157 people dead.